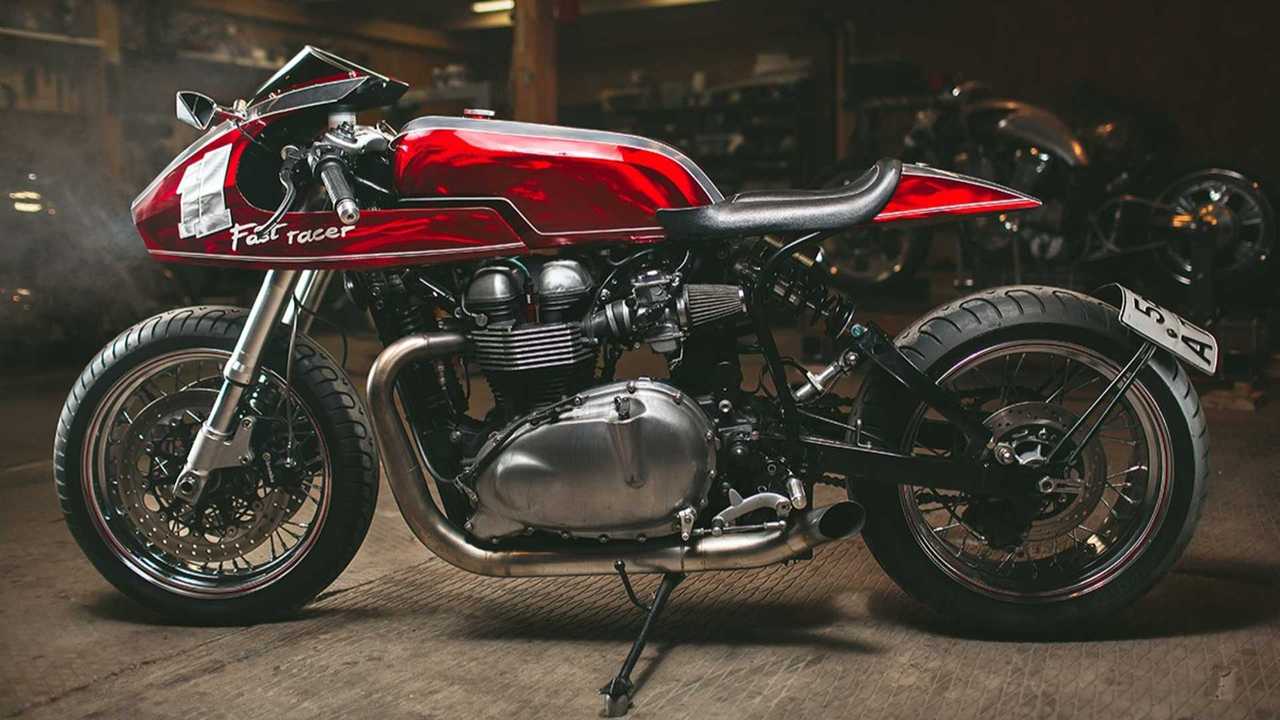 That red. That tail light. That whole rear end.

The Triumph Thruxton is one of those classics: a British standard motorcycle. It’s the essence of a naked motorcycle; no fairing, no extra “stuff,” just an engine, a seat and some wheels. While some people love that aesthetic, some also see that style as the perfect springboard for a custom project.

The Thruxton 900 “Fast Racer” from Timokhin Custom Design (TCD) out of Moscow (yes, Moscow in Russia) was just that springboard. They’ve created a cafe racer out of a Thruxton that looks fast just sitting still.

The owner of the bike works in aviation, and wanted the bike to reflect something fast and airborne. TCD complied by customizing a wholly new front fairing, housing a downturned LED headlight behind a grill created to resemble a jet engine intake. That nose practically bleeds right into a slick, straight-line gas tank, underneath which they retrofitted the bike’s fuel pump. That tank then draws the eye directly to the flat custom seat and back to the minimal, razor-sharp tail section housing a single red LED that resembles a scowling eye.

From the factory, the Thruxton has a famously bad suspension, so the custom shop has replaced all of it, in its entirety, along with the bike's stock swingarm. TCD has custom manufactured an entirely new swingarm for this bike: a cantilevered assembly with a an adjustable, single rear shock. They didn’t forget about the forks, though. They’ve yanked off the stockers and replaced them with upside down Marzocchi forks with Andreani cartridges inside.

Those spanky new forks are gripping an upgraded 17” front wheel with a pair of 320mm discs and two-pot Brembo calipers to bring that bike to a halt after its power commander, K&N pod air filters and custom open exhaust have had their turn.

All of these things are gorgeous and functional but that wrinkled-up metallic red paint job does bring the entire thing together. There are several unusual and unique design decisions on this thing. That downturned nose-cone does echo a bit of the current cruiser style but the rear end and tail light treatment is like nothing I’ve ever seen. Well done TCD; this thing is a serious beauty.