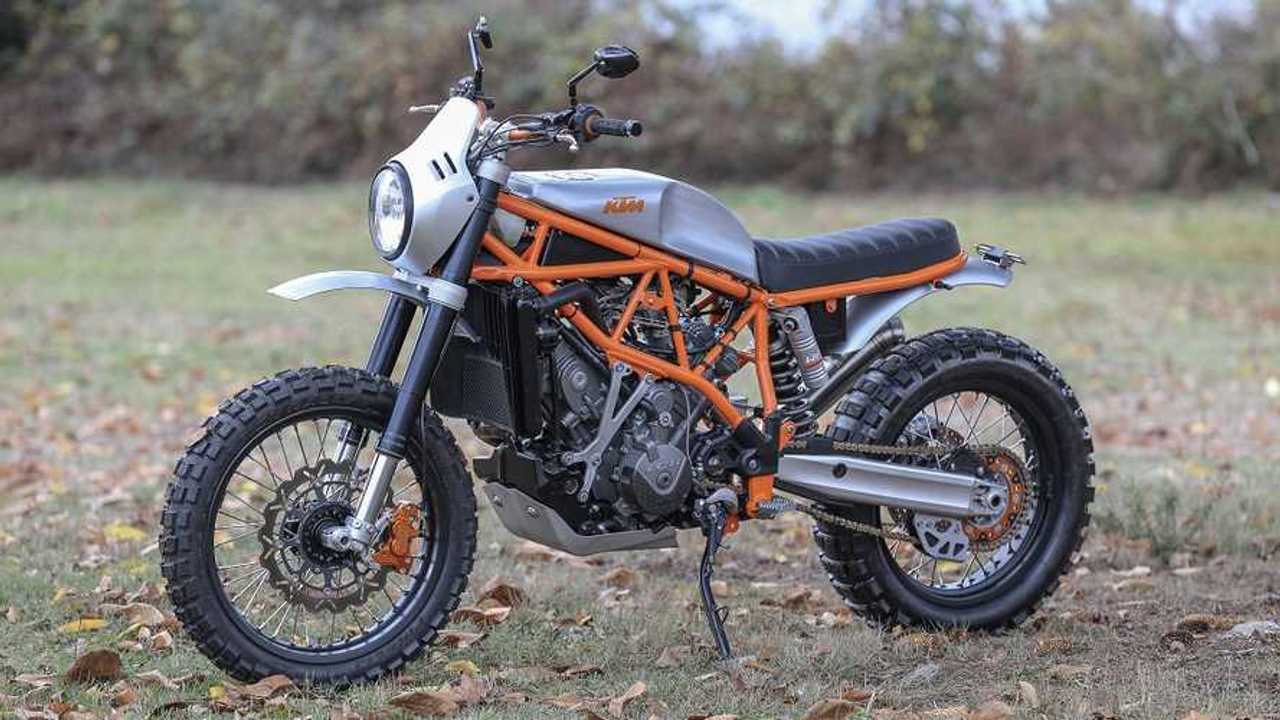 Ok. I’m going to have to say it out loud and finally admit it: I love me a scrambler. I know, the trend is a little overdone right now, but whenever I see a good custom scrambler, I can’t help but drool a little. The quirkier the build, the better! So, of course, I had to share with you this hot-looking KTM 950 Scrambler, built by German shop Sport-Evolution.

THE WONDERFUL WORLD OF CUSTOMS

When someone says “scrambler”, I think it’s safe to say that few people automatically think of KTM. While the brand has a solid reputation in off-roading, the Orange brand has remained impervious to the current neo-retro trend. No tickets to board the bandwagon for the Austrians—they are perfectly content doing their own thing.

That being said, when you think about what a scrambler stands for and what KTM stands for, it isn’t very hard to make connections and reconcile the two. This is why this custom 950 Scrambler looks both exotic and familiar. KTM could finally cave in and decide to come up with its own scrambler looking like this that it would all make sense.

The base of the custom is the rare KTM 950 Adventure, a short-lived dual-sport model that had a short but impactful run on the market in the mid-2000s. While it was widely acknowledged that the 950 was ugly as sin and too tall for its own good (with a towering seat height of 36 inches!), reviewers only had good things to say about KTM’s 942cc V-twin, commenting that it was devilishly fun and capable.

Bike Exif interviewed the crew at Sport-Evolution who shared its story about this lovely piece of machinery. They were asked by a customer to “make something” out of this 950 he had sitting around. “Something” turned into this gorgeous project, that required the team to strip it of its ugly, boxy fairing, exposing the lovely trellis frame.

The subframe was replaced with a more compact setup which received a tuck-and-roll saddle. A new scalloped tank replaced the bulky original and the cowl was grafted from a BMW R nineT Urban G/S. The 10-inch travel suspension was squished down to stiffen things up and lower the bike’s stance. New aluminum spoke wheels were fitted, with the choice of a 19-inch circle at the front and an 18-inch one at the back, wrapped up in off-road Pirelli Scorpion Rally tires.

The modifications and removal of the original fairing helped the bike drop 33 lb, for a new dry weight of 386lb. The addition of a custom intake system with K&N filters and new headers harvested from a different 950 model allowed for a slight power increase. According to the interview with the Sport-Evolution team, the engine rated at 98 hp is now estimated to produce 107 hp according to their own dyno tests.

Dear god. It’s even better than I thought. Well, now I know what I’m going to do if ever I end up with a 950 Adventure casually sitting in my garage…