Few brands on the market do retro as well as Royal Enfield. It’s not just a “look”—the brand actually is vintage and hasn't evolved much since its mid-20th century hay days. This is the appeal of the modern-day Enfields: they are inexpensive, straight forward, and minimalistic. Heck, the company has only recently started making the ABS standard on its models. It comes as no surprise then that a number of custom shops opt for RE models for their personalized designs—they’re easy to pull apart and modify. With the arrival on the market of the new Twins, shops wasted no time get on the 650s as well, including K-Speed for this beautiful Vayu Continental GT custom. 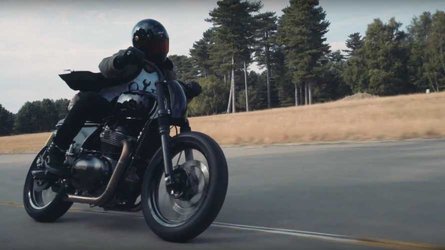 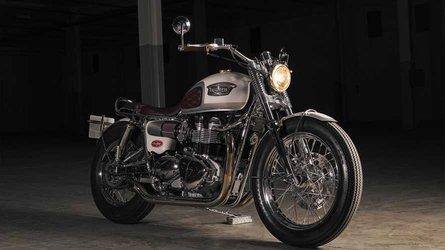 “Vayu” is the Hindu name for the spirit of the wind—a poetic name given to this elegant and airy design based off of Enfield’s all-new Continental GT 650 bike. The design takes the already retro look of the GT, the café racer version of the Twins, and pushes it a bit further into the race aesthetic. According to BikeExif that documented the build, the shop was tasked with customizing the bike with only 45 days on the clock.

The subframe has been modified to accommodate a new, shorter saddled capped with a square cowl at the back. The original taillight has been replaced by a circular LED unit embedded in the rear cowl. The shop also added a front cowl and swapped the GT’s meter for a smaller unit.

The bike received a new set of lower clip ons as well as rear-set footpegs for a more aggressive geometry. The clutch has been upgraded to a hydraulic unit. The front suspension has been squished down and lowered with the headstock sitting only inches away from the wheel. At the back, a new set of YYS shocks have replaced the original ones. The new downsized 17-inch wheels are teamed up with Brembo brakes and wrapped in thick tires.

The engine itself hasn’t been touched, though it received a new ribbed cover. The team did reorganize and relocate some of the components to air the engine cluster a bit. A custom dual exhaust with Diablo mufflers have been added as well. Despite all the work done to personalize the GT, the team at K-Speed pulled the design off well within its 45-day timeline and the bike was completed in February. The result is this gorgeous charcoal and black silhouette that elevates the Continental GT to new heights.