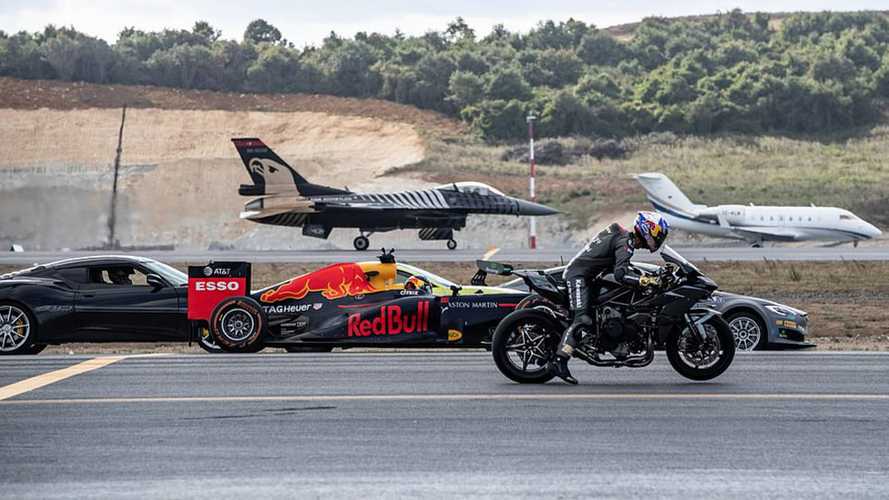 310 horsepower on a 476 pound bike really paid off

Man, we knew Kawasaki had built a beast with the H2R, but the model just pushed things a step—or a landing strip—further! The biggest airport in the world is about to open and the empty landing strips were the ideal setting to answer an age old question: which is the fastest between a plane, a supercar, and a superbike? The result? Considering our excitement, you could probably guess.

The Teknofest is a festival organized in Istanbul, Turkey, that highlights technology, space, and aviation. This year’s edition of the festival took place between September 20 and 23 with events including drone racing, air shows, parachute jumps, seminars, and aircraft exhibition on the agenda. The one event that caught everyone’s attention, however, is the mother of all drag races.

The event took place on the landing strips of Istanbul’s brand new international airport, Istanbul Yeni Havalimani, set to open as the world’s biggest airport in October. On three parallel runways, seven riders, drivers, and pilots took part in one of the most epic contest in a long time. Picture this: a Challenger 605 private jet, an F-16 fighter jet, a Formula 1 car, a Tesla P100D, the 2019 Aston Martin Vantage, a Lotus Evora GT, and a Kawasaki H2R went head to head on a 1,300-feet long race.

Turkish Supersport World Champion Kenan Sofuoglu showed what he was made of in the saddle of the track-ready Kawi. Though the Red Bull F1 car driven by Blancpain GT Series’ Jake Dennis gave him a run for his money, Sofuoglu and the H2R ultimately emerged victorious from the race by beating the F1 to the finish line by only a few tenths of a second. The 310-hp, 998cc, supercharged Kawasaki beast showed everyone up, just more bragging rights for the company who also recently set a number of land speed records.