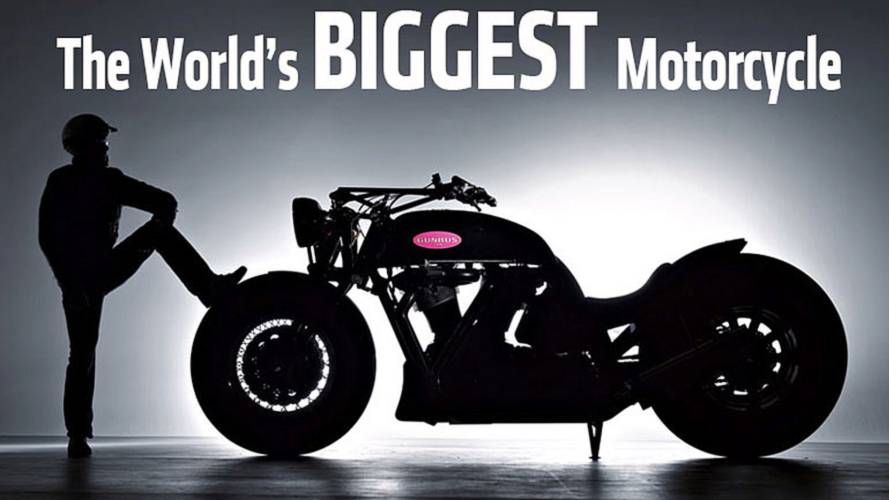 The 1,433 pound, 11-foot long Leonhardt Gunbus 410 is the biggest motorcycle in the world. Think you can handle this thing?

It may have been around for a couple years but we’re still none the wiser as to why the Leonhardt Gunbus 410 was ever built or who it’s actually intended for, or if one has ever been sold.

The German manufacturer claims this massive motorcycle – the world’s largest - is road legal, but to our mind it will either make you look like a tiny human being from a distance or just plain weird close up.

The Leonhardt Gunbus 410 dwarf's what should be viewed as a large motorcycle.

Leonhardt, based in Eppingen, is sticking to its guns and describes its creation as ‘the most perfect combination of performance potential and a well-balanced design’.

At 1,433 lbs it is immense. Overall length of the Gunbus is 11 foot with a seat height of 30 inches. There’s a V-twin engine of sorts, but because this is no ordinary motorcycle and according to Leonhardt it apparently produces 510 lb.-ft. of torque and a claimed 350 hp.

The 410 in the Gunbus name refers to the fact the engine has 410 cubic inches or a cubic capacity of 6,728cc. There’s a three-speed transmission and a reverse gear just in case you find yourself in a tight spot with the Gunbus and need to back out. It might take you a couple of hours though.

As you would expect the Gunbus rolls on massive rubber with a 38-inch front tire and a 42-inch rear.

Leonhardt is especially proud of the fact that the Gunbus 410 is entirely made in-house and assembled by hand and underlines this by stating that: “All components of this motorcycle are most precisely manufactured in solid manual labor.” Yeah we have no idea what that means either.

We’ll leave the last word on this entire matter to Leonhardt: “It is the classical, clear and elegant shape of this motorcycle in prefect harmony with its distinctive, mechanical design which lets the Gunbus 410 appear to be an especially charismatic vehicle with an irresistible visual effect. And moreover, since the creation of Gunbus, terms such as size and performance have been given a completely different meaning.”

The Leonhardt Gunbus 410 is absolutely massive.

So there you have it. Big bike. Big money. We’re still none the wiser.

Any guesses as to how long that chain is?

Even the reverse is heavy duty