It’s that time of the week again! Time to check out what awesome one-on-one, quarter-mile event we have going on on the Interweb. This week, we have a Hulk versus Hulk type of situation: the biggest Ninja on the market takes on a monster from the Golden Era of muscle cars. Who wins the race? 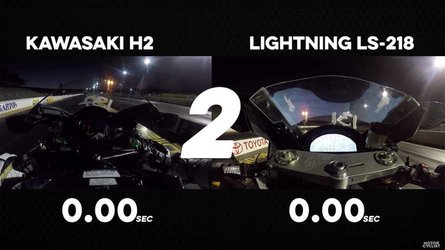 Two mean green machines going up against one another on the drag strip. In the green corner, a classic Kawasaki Ninja ZX-14R, propelled by a 1,441cc, inline-four mill rated at an estimated top speed of 174 miles per hour. In the other green corner, a legendary 1970 Plymouth “Cuda Hemi” Barracuda powered by what is likely a monstrous 7.0L Hemi V8 engine.

Each opponent has a spec to its advantage. For the Cuda, it’s the power—an estimated 900 horsepower produced by the Hemi engine on steroids. As for the Kawasaki, it might not push 900hp, but it’s close to a sixth of the weight of the Barracuda. The pair face off not once, but three times.

If you think you know how it ends, think again: all three runs are actually pretty tight. While at take off, the Cuda seems ready to take the lead, it doesn’t take long for the Kawasaki to catch up. For most of the three quarter-mile runs, as the camera pans to follow the racers, it’s hard to tell at all who’s in the lead. The two vehicles remain neck to neck for most the runs. It’s only once they cross the finish line and the run time is displayed on the boards that we know for sure who's the fastest.

Result? The fastest of the three runs is the first one and the ZX-14R crosses the finish line with a 9.04-second time, leading only by 0.37 seconds, with the Cuda recording a respectable 9.41-second run. That’s some serious muscle car chops.