Riding at 200mph is fast and scary enough on dry pavement. On ice, though?

Zef Eisenberg, a successful self-made entrepreneur and serious speed addict with several land speed records already under his belt, is going to make an attempt at a new record–this time on ice. 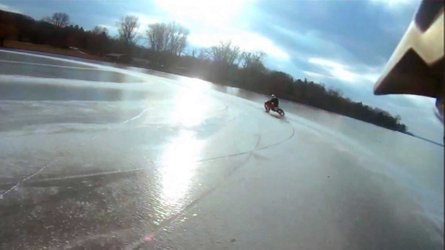 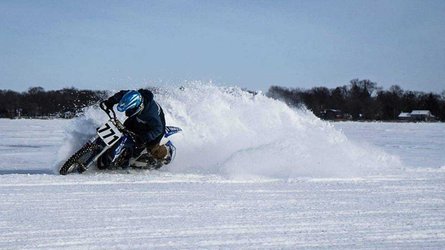 If you’ve ever ridden a motorcycle on ice, on purpose, you know that the traction offered by dedicated studded or spiked ice tires is pretty amazing. You may also know, if you’ve ridden a motorcycle on ice with other people, that sometimes those studded tires, especially with screw-in studs, will spit their studs out at speed. This is why MadMax, Eisenberg’s race team, tested the studded tires by spinning them inside a chamber made of bulletproof glass at speed and off the bike. If even one of those spikes tears loose, since they’re mounted from inside the tire, it will become a deadly projectile and the bike also then has a sudden holed tire at 200mph. This is a dangerous pursuit to say the least.

Eisenberg is no stranger to things going wrong. In a speed record attempt in 2016, he crashed at 230mph and broke 11 bones. He has recovered from that and seems undeterred.

The latest record attempt will be on a frozen lake in Arsunda, Sweden on March first and second. He’ll be riding a supercharged 350hp Suzuki Hayabusa with hand-made titanium ice spiked tires. The challenges for this ride will be plentiful, not the least of which is that the weather there, this time of year, is generally on one or the other side of zero degrees Fahrenheit. Another is the race surface: at these speeds it must be perfectly flat, and we know Mother Nature doesn’t like perfect things, so hopefully someone has scouted the lake to make sure there aren’t any unexpected issues. Lakes, especially large ones, tend to move, and breaks in the ice, even when it’s that cold, are not uncommon.

I very much hope that nothing goes wrong and he’s successful in his attempt. And also that he can stave off any frostbite!