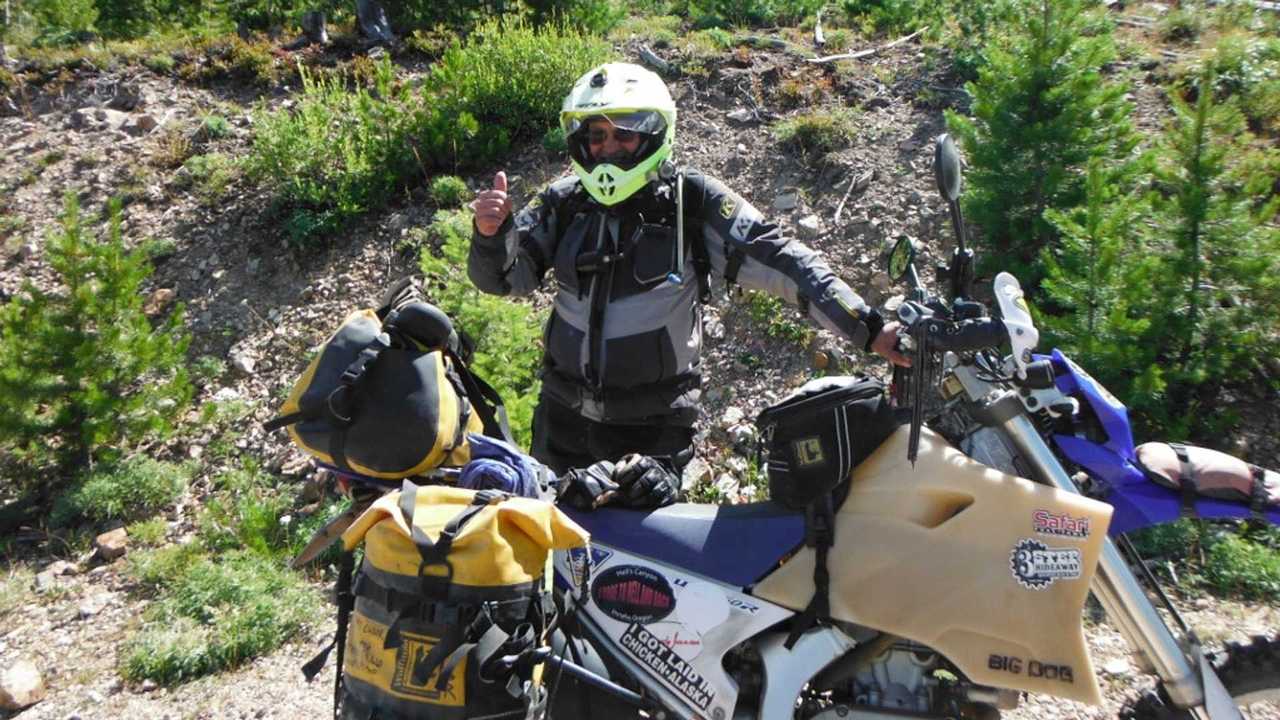 From August 11 to 14, 2019, a carefully selected pack of “serious and extreme dual-sport motorcycle adventurists” will leave from Silverthorne, Colorado on the final “Annual Running of the Dogs”, aptly named, “Last, Last and Nevermore.” In the words of event promoter, Ron Douglas, this final instalment of the popular ride will be “wild and woolly like previous Big Dog events, pushing our fraternity of entrants’ physical and mental envelopes as they tag and top some the highest navigable passes on the North American continent.”

If this sounds tempting, and you are the owner of an enduro-style bike that is 640cc or larger, there are still spots left for this invitational event. Entrants with the “Ride Stuff” (not my punny pun), are encouraged to pre-assess their ability level since this is not terrain for the faint of heart. Over its long history the race routes and host cities have varied, however, the dramatic changes in elevation and climate that are found in the Rocky Mountains have remained the same.

Expect to travel between 800-1,200 miles that may include mountain passes up to14,000 feet above sea level, which means that, even in the summer month of August, riders have had to contend with rain, snow, and sleet as well as 100-degree heat. “Riders often make numerous crossings of the Continental Divide,” describes the event post, “sometimes fording swollen streams, and riding over snowfields and shale cliffs.” They go on: “It is not unusual for a rider to be in a single-track path no wider than 24 inches, with a drop-off of 1,000 feet on one side and a sheer rock cliff on the other.” Still interested?

Passion projects like these and the Mad Bastard Rally are the best kinds of examples of the incredible power of motorcycles to unify and inspire like-minded adventurers from around the world. We’ll make sure to let you know how it goes.

(Denver, CO):  The 30th Running of the Dogs, also known as the “Big Dog Adventure Ride,” has announced their last physical fraternal gathering.  Themed the “Last, Last, and Nevermore” event, it is slated for August 11-14, 2019.

The 2019 event will be based in Silverthorne, Colorado.  An optional day ride from BMW of Denver is a “mild ride” on August 11 for adventurists wanting to add a personal day of “Hollywood Styled Adventure Riding” to the group’s base camp. The official Start is August 12, from Silverthorne.

Invited entrants in this year’s event include riders from as far away as South Africa, Thailand, Great Britain and will be mounted on BMWs, Kawasaki’s, Yamahas, Hondas, KTMs and possibly a highly modified 750cc 1936 Indian Sport Scout, an early 1970’s adventure sidecar outfit and a confirmed BMW 1975 R75/6 with famed adventurist John Wesley Ogden evidencing adventuring riding from the pre “ADV” era.

Event Promoter, Ron Douglas, said of the 2019 gathering, “It’ll be wild and woolly like previous Big Dog events, pushing our fraternity of entrants’ physical and mental envelopes as they tag and top some the highest navigable passes on the North American continent. It has always been a non- Buttercup event. Since this is our ‘Last, last’ event we’ll be kicking the ghost of ‘Nevermore’ down dirt roads, tracks and off cliffs or into freezing mountain streams.”

The BIG DOG ADVENTURE RIDE is known as an annual fraternal invitational gathering of serious and extreme dual-sport motorcycle adventurists, or “The Annual Running of the Dogs.”  Some openings are available for first time entrants.  Interested and advanced motorcycle adventure riders should contact bigdogbmw@yahoo.com after scrolling through the BIG DOG website at www.horizonsunlimited.com/bigdog to evaluate if they have “The Ride Stuff.”

“The BIG DOG ADVENTURE RIDE is neither a race nor rally.  It is the annual gathering of a fraternity of honorable, like-minded, and serious motorcycle adventure aficionados sharing a similar philosophy, their way of being.”