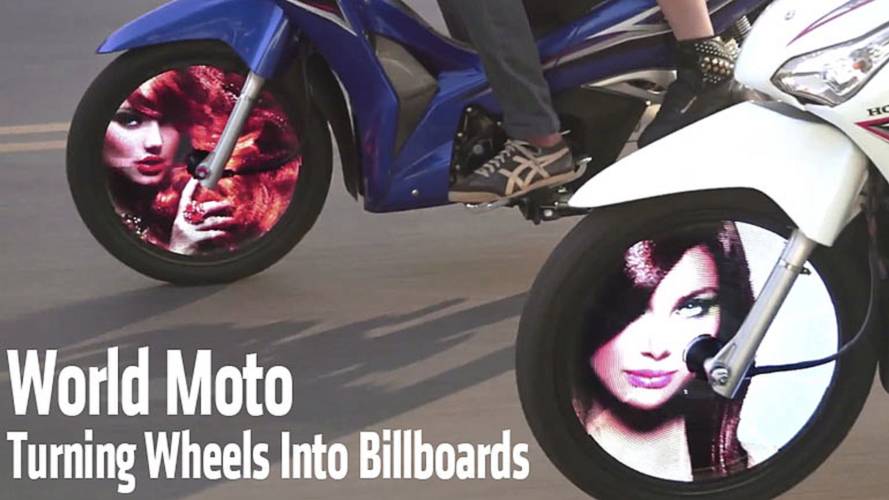 Thai company World Moto has just developed a system that allows you to turn your bike’s front wheel into a full color video screen with Wheelies.

Think you have the latest high tech kit on your new motorcycle? Apparently you don’t as a Thai company has just developed a system that allows you to turn your bike’s front wheel into a full color video screen.

The concept has been developed by World Moto, based in Bangkok and was recently shown at the Sign Asia Expo in Thailand. Described as a new motorcycle innovation, it will allow a rider to make their front wheel a mobile billboard or have the capacity to screen video while the bike is in motion.

World Moto became the first company to develop a modern meter system for use on motorcycle taxis – which are used predominantly in Asia – but it’s now turned its attention to developing technology that could change the way the front of your bike looks.

Based on the principal of persistence vision where, to the human eye, static images can be combined to give the illusion of movement, World Moto has created what it calls Wheelies.

This involves 424 LED lights being mounted on an eight spoke wheel with a computer tracking the wheel’s speed and where the spokes are at any given time. Then the lights have to be lit in a series of sequences to create the image you want.

World Moto began work 18 months ago on this idea and is now looking for a company that will use the system for advertising on motorcycle taxis in its home country of Thailand.

Although still in its infancy, Wheelies can currently show 30 seconds of video on a loop. Long term though World Moto plans to be able to stream video and play full length movies on the front wheel of any motorcycle or scooter, or for that matter any vehicle with wheels. Not that screening a movie on a wheel is neither safe nor practical, but rather more of a novelty. Currently the company is using a web application to manage content that streams to the front wheel.

World Moto has not released a price yet for this piece of technology, as it is interdependent upon the size of a given bike’s wheel, however they are estimating initial cost could be around $1,000 per front wheel unit.

It’s also not clear if this is something that could be sold to private individuals outside of Thailand to use on their bikes or what the legal implications are of riding a motorcycle while playing a video through your front wheel. Our guess is that it would get you a Fix It ticket faster than you could say, ‘World Moto Wheelies.’

News: Why We Ride