Watson On: Why I Go Solo 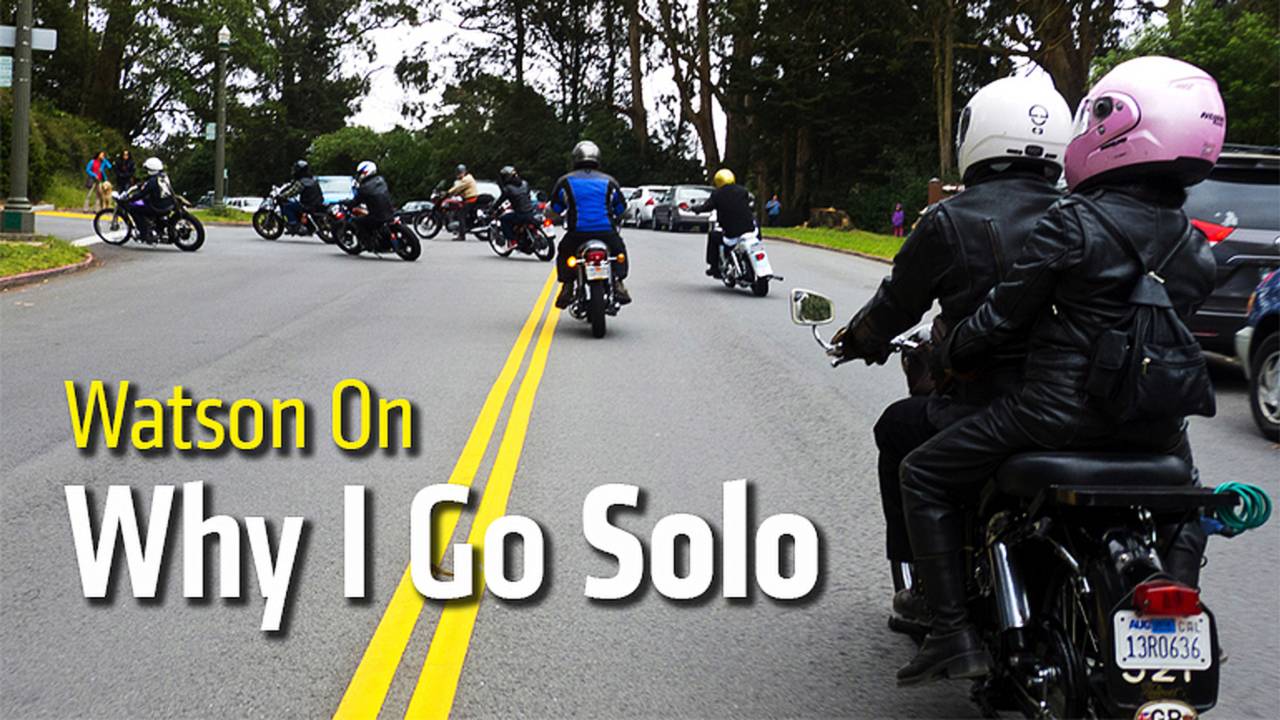 Group motorcycle rides are not for me. Here is what typically happens on a group ride and why I prefer to go solo.

I have to be honest here and admit I’ve never quite understood the group ride motorcycle thing. I know a lot of people that enjoy it and look forward to getting together with like-minded folk to ride motorcycles in a conga line down the road.

The problem for me and riding in big groups is, I know my abilities and what I am capable of doing, but I don’t have a clue about the guy on the tricked out chopper who wants to ride alongside me. He may have seemed pleasant enough in the parking lot but he might also be one of those guys that wants to ride three inches alongside you and will then try and have a conversation about his marital problems as you cruise down the road.

Or he might be testing the new brake system that he installed last weekend all by himself and is now keenly aware that taking the entire brake off the chopper’s front wheel was not a good idea. Nothing personal buddy, but for me this just isn’t going to work.

I give full marks to people that like to ride in groups. Some of them organize terrific rides for charities and raise large sums of money for all sorts of good causes. Though I still prefer to hand over my dollars directly to the deserving charity rather than pay to sign up with a group of strangers who are going to ride with me into the desert for a day and who I know nothing about other than the fact we like motorcycles and support the same causes.

I am sort of aware there is whole series of etiquette involved in riding in large motorcycle groups. As I understand it, there is a someone out in front, who is usually called something odd like Slayer; he may have a lot of badges on his leather jacket and will give all the orders about where this moving train of motorcycles can go, when they will stop and what position you’re assigned to ride in.

Behind Mr. Slayer is a mixture of motorcyclists with varying degrees of ability on a wide range of bikes. Bringing up the rear are the new guys, who have just bought their first bike and have yet to experience riding with others. In the back you will also find those whose machines have bits falling off them and so they have to stop every few miles to pick up the pieces.

Continue Reading: Watson On: Why I Go Solo >>

Lurking in the group, you’ll undoubtedly find a psychopath. He’s the one that’s been warned about his behavior on previous runs. He’s been told to hold back on drinking too many beers at every bar the group stops at, so he’s promised he’ll stick to just one beer at the 10 stops on today’s route. He will also trap you in awkward conversations that you feel obliged to smile during while simultaneously looking wildly for an exit strategy.

Out on the road, when he spots a gap open up in the group seven riders ahead, he will decide to overtake the whole group to demonstrate how invincible he is and that his bike is louder and faster than anybody else’s.

Mr. Slayer will inevitably banish the group psycho to the rear of the pack for the remainder of the year. He’ll do that until either he drinks too much and falls off in heavy traffic on next weekend’s run, or stabs someone at the after ride party back at the bar where the adventure all began.

I get why people like to ride in groups. They like the camaraderie, the friendships and enjoy doing something together that we all love – motorcycling. Seriously, good luck to them if that’s what they want to spend their weekend doing.

For me, I couldn’t think of anything worse. I couldn’t accept being told what to do, when to do it and who I should ride with and for how long.  I’m also not that keen on being stabbed by strangers. That’s probably why I am going to keep on riding solo.

How about you? Do you do the group ride thing? Are you a solo rider? Or, do you do a little of both?