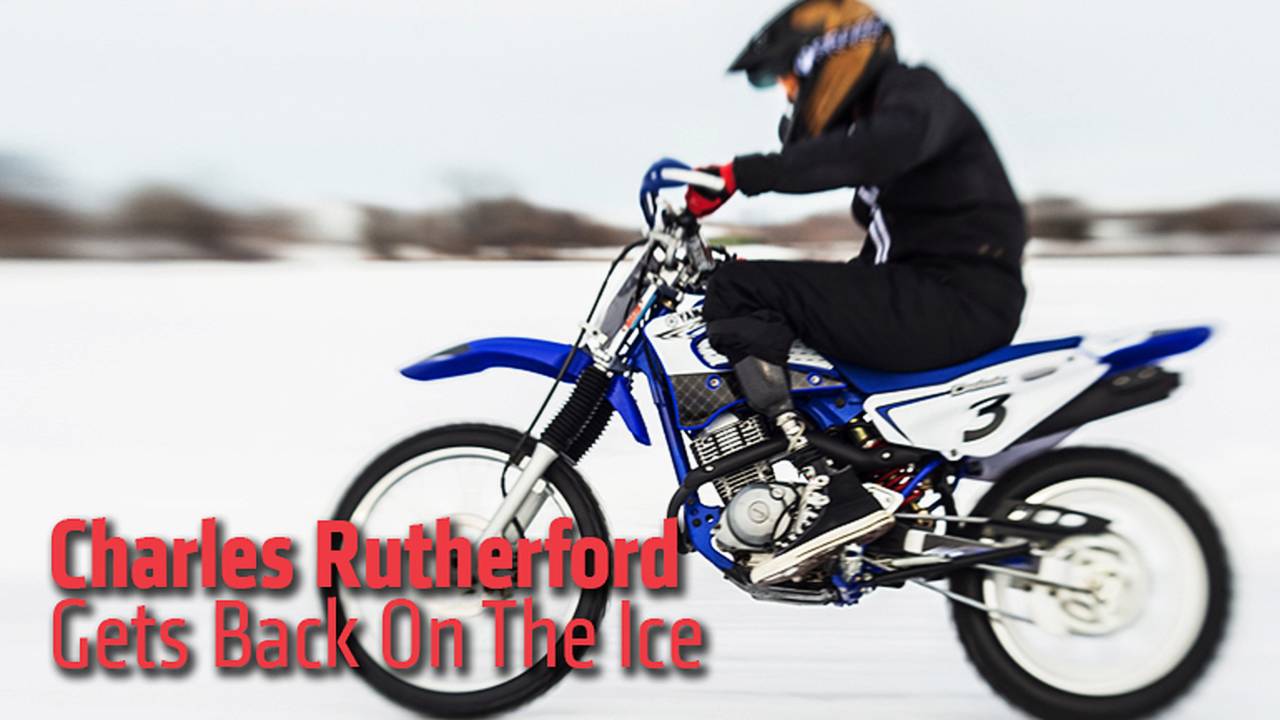 Follow the story of Charles Rutherford, he proves time and again that a missing foot is only an obstacle if you allow it to be. And he clearly doesn't.

We’ve been following the story of Charles Rutherford over the past few months on RideApart – you will remember him as the rider who lost his foot about eight months ago due to a motorcycle accident with a motorist. What’s amazing about Charles isn’t his prosthetic foot made by Ottobock and Ducati Minneapolis, or the fact that he wanted to get back to riding mere months after his accident. What really stands out is his amazing attitude that does not let anything get in the way of what he wants to accomplish or experience. He proves time and again that a missing foot is only an obstacle if you allow it to be.

We caught up with Charles just as the Polar Vortex was blanketing much of the U.S. and Canada. Naturally, he took Mother Nature’s frigid chill as a cue to try out ice riding for the first time since becoming an amputee. Here’s how it went.

RideApart: Where did the ride take place?

Charles Rutherford: It was on Fountain Lake, 45 minutes west of Minneapolis. I’ve got a buddy who lives out there and he’s got a couple of plow-equipped four-wheelers to prep a track.

RA: How did you decide it was time to take up this particular challenge? Were you nervous?

CR: I decided it was time to get back on the ice because it's my first winter as an amputee. I've had an invite to get on the ice every year since I stopped AMA road racing in 2000, but for whatever reason, I never took anyone up on their offer. Now that I cherish anything I can do, I want to do everything, riding or not. I was a little anxious with the reality that a wrong move wouldn't break my carbon fiber prosthesis, it would break my knee or pull my hip out of joint. My 37-year-old brain had to remind my 21-year-old spirit that I didn't need to be a hero. Thankfully, they came to an agreement.

Charles Rutherford on his Yamaha YZ450F

RA: You rode a Yamaha YZ450F. Tell us why you choose this particular bike.

CR: Because my pal Rich Delak was brave enough to offer his AMA flat track Yamaha 450. The great thing about dirt bikes is that the shift lever is already adjusted so motocross boots can get under it, which makes it easy for me to get my toe under the shift lever. As someone who can't articulate their ankle (unless under weight while walking), shifting a bike requires moving my entire leg up/down, which is the style I use on dirt bikes anyway. Because the bike didn't need any modification and I used my normal riding position and movement, it wasn't only the best I've felt on a bike, it's the best I've felt, period. I don't feel as accomplished doing many things I did before my injury, but when I get on an ice bike, my only disadvantage is lack of experience.

RA: You look good on the bike. How did it feel?

CR: Although it had been nearly 15 years away from the ice, it all came back pretty quickly. After a couple casual laps to make sure shifting and dragging a foot wasn't going to be a problem, I started to twist it a little harder.  With only my trusty Chuck Taylor between my prosthesis and the shift lever, I was surprised how vividly I could feel the lever through my lower leg in the socket. Dragging my left foot and returning it to the peg required zero thought. It was certainly an advantage that my last two bikes ('08 HyperS and '13 Hyper SP) have a similar riding position to the YZ450.

RA: Tell us what was most challenging about the ride and how long you were on the ice.

CR: The hardest part is getting that Chuck Taylor to bite on the ice while I straddled the bike in order to kick-start that puppy! Someone else had to fire it up for me after I'd dropped it. It's an awesome feeling when you're standing over a $16K race bike that you've just let fall over. Thankfully, my ego was the only casualty. A smarter guy would have balanced on the stand to kick-start it.

RA: The video shows your shakedown run, then you went back the next weekend to ride for real, which is how we got the photos of you for this article. Tell us how the two rides differed for you?

CR: The video was shot on January 5th. I want to capture all my 'firsts' after amputation, and it could have been a one-time invite had I wadded up an expensive race bike. I had such a great time turning laps that I enthusiastically accepted an invite to come back on the 12th. There were about 15 really fast guys, a few of which are 2014 ice championship contenders. I watched closely and asked a couple of them for advice, which they gladly gave. My speed picked up drastically on the 12th, when some of these action shots were taken. I also turned a ton of laps on a few TTR's, which may be the most fun machine ever coopted for the ice. Zero power, very light on weight but huge on smiles.

RA: What do you plan to conquer next?

CR: Motorcycle-related, I have a skunk works project in the plotting stages. To my knowledge, it would be the first time in history a certain bike was ridden on the ice. I'm determined to make it happen, so stay tuned. Non-motorcycle, I want to learn how to kite ski, pilot an ice boat and get my light aircraft license.

RA: FYI, we want the exclusive…

RA: Any life lesson learned from your first time back on the ice?

CR: The only thing keeping me from an achievement is my brain. I've allowed apprehension to be a barrier professionally, personally and recreationally, but not anymore. I want to feel every sensation, even the disgust of sucking at something new, and the only way to do that is to put myself in a position to have the experience. It doesn't have to be so-called 'adrenaline junkie' stuff. I can't wait to try stand-up paddle boarding for the first time as an amputee.

RA: Tell us about the new vanity plate on your M3.

CR: ‘It's just a foot' was the phrase I had echoing in my head the morning I woke up after the accident, before I had to make the decision whether I'd have my foot removed or go through months of surgeries. It's become a well-known axiom to the people around me, in part because it's the reality that made me accept having my foot amputated and in part because I don't want a prosthetic carbon fiber foot to be an excuse for not being able to do something. So not only does JUSAFT have deep meaning to me, it's also a daily reminder that I don't have any limitations.