Give and Take: How One Man Lost His Leg To Ride Again 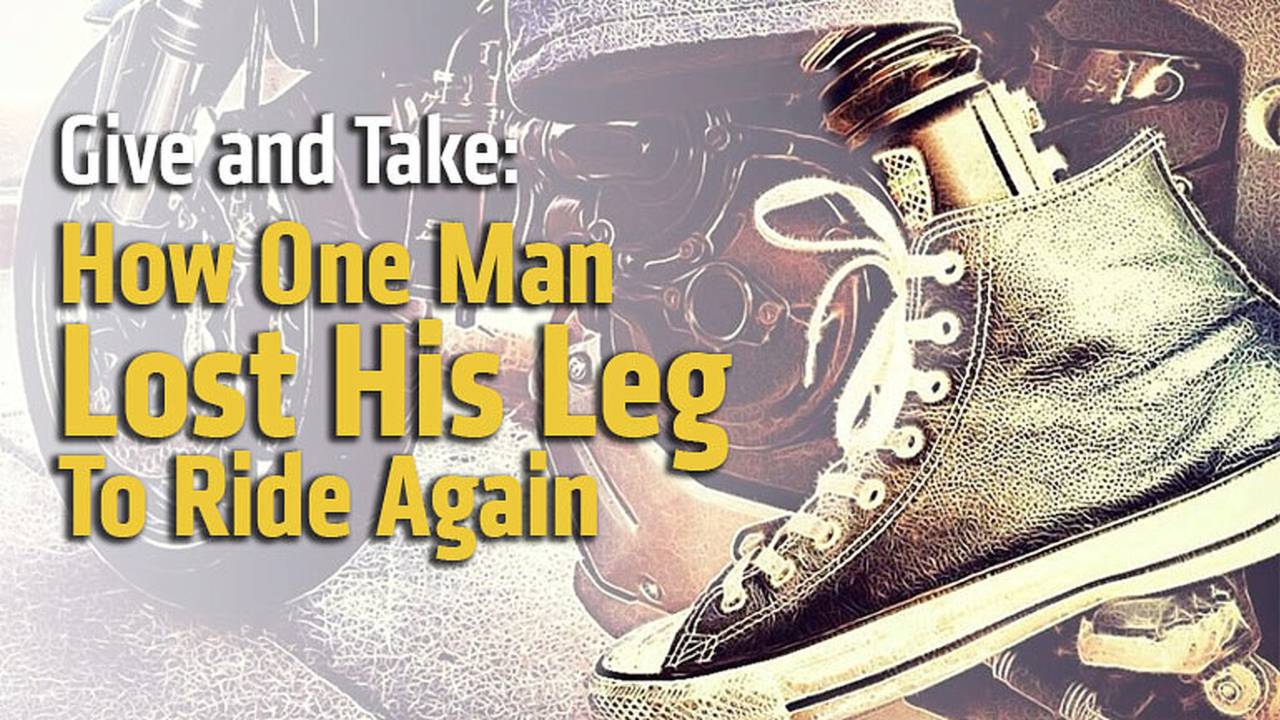 In order to keep riding motorcycles, Charles Rutherford had to amputate his foot. Here is his amazing story.

If you had to amputate a limb in order to keep riding motorcycles, would you do it? That's what happened to Charles Rutherford who, seven months after losing his left foot, is back riding. We talk to him about that monumental decision in this interview.

RideApart: Tell us about your accident. How did it happen and what was the immediate aftermath?

Charles Rutherford: June 26th was a gorgeous summer day and I was a couple blocks from my downtown Minneapolis condo. As I took a left turn onto a side street, a large SUV swung a U-turn into my lane, trying to grab the last parking spot on the corner. I had a couple tenths of a second to avoid hitting him head-on and I almost missed him, but instead, skipped off the front of the car with my left leg caught between the bumper and my bike. I nearly rode it out, but I hit the curb and ended up on the sidewalk with the bike still running in the gutter.

RA: How could you have better protected yourself from injury?

Charles Rutherford: 2012 was a tough year to be my body. Although I've always been an ATGATT (all the gear, all the time) guy, I broke my shoulder blade in May on the street (locked the front under braking) and both feet on the track (locked the front on some fluid) in September — both on my 2008 Ducati Hypermotard. To protect my still-healing feet, I bought some serious boots (Icon Elsinore) for 2013. Unfortunately, no boot is SUV-rated. If I'm being extra critical of myself, it's that an illegal U-turner was nowhere on my radar of possibilities. I play the woulda, coulda, shoulda game on occasion, but when I catch myself doing it, I remind myself that the only place I need to look is where I want to go.

RA: You had some serious injuries as a result.

Charles Rutherford: Yes, I had a fragmented compound fracture of the tibia and fibula which means that whatever wasn't sticking through the leftover skin had been turned into calcium dust. I'd smacked my head enough that without a helmet, it would have been messy. Had I caught the SUV half a twist grip further back, I'd have walked away - angry, but on my feet. The funniest part was, this is the slowest crash I'd ever had. That may sound strange, but as a former road racer with an AMA license, I know that it's not the speed that hurts, it's the oncoming or stationary objects.

RA: How did you arrive at the decision to amputate?

Charles Rutherford: Although I was praying shock would turn out the lights until a happier part of the film, I was alert the entire time, right up until they had to take the boot off in the Emergency Room. Thanks Ketamine. When I came to, my family called in the doctor who told me I had options. ‘Options? Yeah, the option is stitch me up and get me on my way, doc!’ He said it wasn't that simple. They had attached an external fixator, which was holding the foot to my leg via a hole they drilled about 5 inches below my knee. Thankfully, there was still blood flow and feeling in my foot, so they didn't automatically whack it off while I was out. I was following along with the doctor as he told me the process of keeping the foot. They could install a titanium rod in place of the three inches of missing bones and they'd have to re-create the bone and flesh by harvesting bone, muscle and tissue from other parts of my body. Meaning six to eight operations with a 20 percent chance of infection each time, over the course of about 18 months. At the end of all that they'd know how well it worked. ‘Ok doc, I'm with you. What will that look like long-term?’ Probably a fused ankle, never ski, mountain bike, chase kids or ride motorcycles safely. Lots of rehab and pain would likely be a constant companion. ‘What about amputation?’ About 8 weeks and you'll be walking. You'll do all the things you're used to doing now.

Although I didn't have to make the decision at that moment, it hit me that just five hours before, my biggest decision was where I was going to take my then-girlfriend to dinner after mountain biking. Now I have to decide whether I'm going to keep my foot?

I cried myself off to a narcotic nap and woke up in the morning with an unshakable peace and the phrase, ‘It's just a foot,’ rolling through my head. Wait, but it's a foot! Yeah, it's just a foot.

I told my family and girlfriend that I was thinking of amputating. They agreed. When the doctor came back that day, I asked three questions: Which option will heal the fastest? What will give me the best quality of life? What has the fewest chance of future complications? Answer: Amputation. My answer: ‘Then after 36 years of faithful service, we're gonna take that puppy off.’ I was able to find the best orthopedic surgeon in town to do the Ertl Method of amputation, which was a high performance/activity method that removed my leg 6.5 inches below my knee, creating a bone bridge between my tib/fib with bone from what they'd removed.

RA: What physical therapy or other methods did you undertake to start riding again?

Charles Rutherford: Although my prosthesis is state of the art, the reality is that there's no way for me to articulate the toe when I'm not taking a step. It only flexes when I put weight on the heel or toe. 69 days after amputation, when I'd begun to groove to the feeling of my carbon foot, I decided to get on my dad's Monster S2R to take it up and down the block. There was no way I could hook the shift lever with my toe, so I had to reach down and pull to shift up. I had to downshift with my heel.

RA: Have you modified your bike in order to work with your prosthetic limb?

Charles Rutherford: My prosthesis is attached with suction and the air is removed through a hose with each step I take. I'd noticed the diameter looked similar to steel-braided brake line and Ducati Minneapolis was kind enough to cut and attach a couple pieces, giving me what I believe is the world's only prosthetic foot that won't suffer from fade. Ducati Minneapolis was also kind enough to take a serious interest in getting me back in the saddle. Simply raising the shift lever so I could hook it with my toe fouled the engine case, so they made some adjustments to a 2013 Ducati Multistrada and put me on the dyno to make sure I could get it up and down through the gears. It worked.

RA: What have people’s reactions been like when they realize you’re riding with a prosthetic?

Charles Rutherford: When I have both feet on the ground at a stop, it's pretty clear something isn't normal. I've had other riders not in our group point and give a thumbs-up. People who don't ride also don't understand how important it was to get back on a bike. Someone else's simple mistake shouldn't rob me of my love of two wheels. If you have to explain, they'll never blah, blah, blah.

RA: Have you had to modify your riding gear? How?

Charles Rutherford: In what will probably horrify the riding community, my best option is to wear thin shoes. That way, I have more room to get my foot under the lever while keeping it low enough to make it reasonable to hit downshifts with my heel.

RA: What did you family and friends think about your decision to start riding again? Has that changed over time?

Charles Rutherford: For me, riding is baked in the cake. Photos of my first time back on my dad's bike had 255 likes and dozens of comments on Facebook. There weren't many that were anything but positive. Thankfully, my love and addiction to motorcycles wasn't stored in my left foot.

RA: What do you ride now and what do you want your next bike to be?

Charles Rutherford: I'm between bikes right now. That Hypermotard was the most amazing machine I've ever thrown a leg over, but the kind of riding I want to focus on in the future is going to be something that'll chew up the miles in places and between points of interest that a Hyper can't do. I don't have to try very hard to picture myself on a Pikes Peak Multistrada for 2014. After watching The Long Way Down and The Long Way Round during recovery, I may have to consider a BMW though.

But I have to tell you, after the outreach of the Ducati community in general and John Meyer, president of DOOM (Ducati Owners Of Minneapolis), it's going to be really hard to picture myself on anything but Ducati.

RA: And the aftermath?

Charles Rutherford: I could write a compelling country song about it. I started the summer with a girl, a bike, a pistol (I legally carry a pistol and I voluntarily surrendered it to police on the scene), a left foot and I lost them all.

Also, your insurance or the auto insurance of the other driver will not be enough to compensate you for any serious injury. If you ride a motorcycle, get an umbrella insurance policy! If either me or the driver had a million dollar umbrella policy, I'd be talking to you from Italy or the Dominican Republic right now. Thankfully, my health insurance covered my hospital and prosthesis, but the loss of the foot isn't worth the $100,000 he had in liability. Additionally, with State Farm, the "under-insured" motorist policy doesn't mean squat when I'm on a motorcycle. Know your policy.

Although the driver had some personal assets that weren't insignificant, I decided not to sue (and likely win). Instead, I invited him out for a beer so he could instead share in the joy of the fact that I'm back to golfing, skiing, and mountain biking. He went from being a sad, broken person, worried that he'd ruined someone's life, to genuinely sharing in the joy of my having my life back and still looking forward to all the things I have left to do.