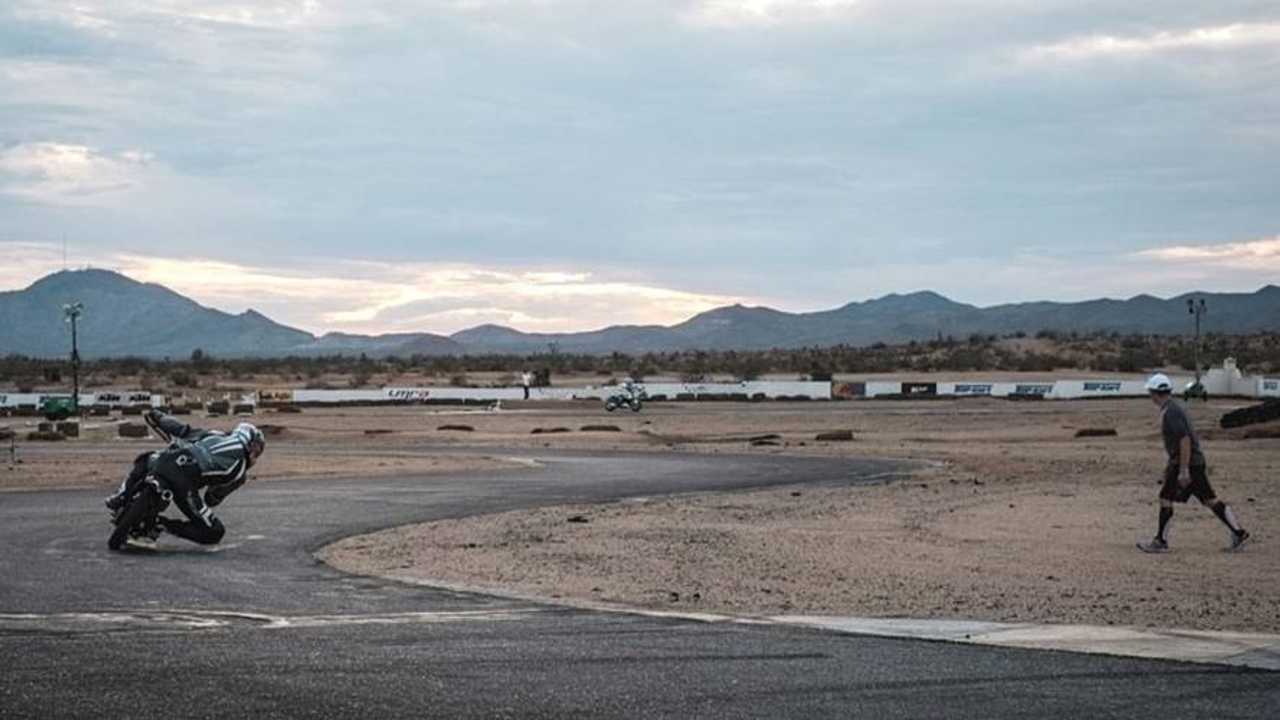 It’s 4pm, 92 degrees, and I'm in 3rd gear barreling down a dirt road at 70 mph somewhere in California's Apple Valley. The All Wheel Symmetrical drive on my Impreza is fully engaged as I loosely skate along the arid surface. Minimal inputs keep me in control. More aggressive inputs force controlled drifts through a couple of corners. I figure before I get to wherever the hell I am going, I would get in a little of my own fun and test my new Suby's rally pedigree. I was not disappointed.

READ MORE: How To Motegi: A Guide On Getting To Japan's Greatest Race | RideApart

Around the bend and in the middle of Apple Valley, the Grange Motor Circuit appears. Filled with a grid of motorcycles, a race is already underway.

I’ve photographed professional events at racetracks before, so upon arrival I asked if there was a media or safety briefing. Do I need to sign anything?

One of the organizers looked at me a smiled, “Don’t get hit and look both ways before crossing the track. Oh…and here’s a yellow vest.” I chuckled. Then I signed a safety waiver.

I had about 19 more hours of motorcycling to watch so I thought before I got lazy with my friends, it would be best to get out on the track and get some shots of some racers before the sun set. I bounded onto the infield and took in the race for 10 minutes before getting down to business.

Some of these racers were badass, others I could figure were a shade more novice and many fell in-between. From afar, mini-moto bikes do not appear to travel fast, likely 40-45 mph along the straights and vary in the corners. That all changes close up when a knee goes down and that throttle opens up after hitting an apex. You feel like you’re watching MotoGP from the stands. But I'm only feet away.

I set up and got my photos, but I would pause frequently, in serious awe of some of these riders. The slow speed and square nature of these small bikes actually lend to understanding the technical nature of motorcycle racing. One can see how riders position their bodies and prepare for corners, the action is not as blinding as it is on bigger bikes.

For that reason, I found it incredibly interesting to watch and learn. I could feel the urge to hop in the saddle creeping up in my thoughts.

READ MORE: Hell on Wheels Hillclimb - The Event That Almost Drove Me to Take up Golf | RideApart

After an hour in the infield I decided it was time to take a break, meet up with my friend Sarah and get properly introduced to her team.

Sitting in the pits with 16 hours of racing in front of you generates a number of questions to an ignorant observer: How much are these bikes? How do I get involved? Where can I go to learn more? How did you (the royal you) get into all of this? Are there age requirements? What are the different classes? Where is the food and cold beverages? I’m hungry.

I found food and drink and began getting answers to my questions. I sat down with Ryan O’Neill and Christina Orris of the UMRA—that’t the United Mini-Moto Racing Association. Most race series at the amateur level, especially moto racing, are organized at the grassroots level. It’s not about big money, just passionate people learning, teaching and enjoying some good old-fashion motorcycle racing.

Pretty much any motorcycle under 150cc. The bikes on the track tonight are Honda Groms, Honda XR100, Honda NSR50, and Yahmaha TTR125.

Remarkably, anyone can race Mini-Moto and have the time of their life. Whether you are 40- or 8-years- old, there is no age requirement and you don’t need a license to race or participate. That’s awesome.

Getting started in Mini-Moto is as easy as buying a cheap bike. Start by looking at the XR100’s and NSR50’s, they can be found for under $2000 used. The Honda Grom is a bit more expensive because it's still fairly new, but you can use that bike on and off the track if you are so inclined.

The next big purchase for anyone will be protective gear. That means race leathers, boots, gloves and a helmet. This will cost almost as much as the motorcycle, but safety is never something to compromise on when racing, trust me.

Another added benefit is that overall maintenance for these smaller bikes is minimal compared to larger sport bikes. In the event you have to replace components after a wreck, you are not going to be crying at the cost of parts.

For more questions and want to know about upcoming events, I recommend following the UMRA Facebook page. They are super nice and will answer all your super detailed questions if you have them.

Specifically, this 24 hour endurance race. It’s a simple concept: Get a team of your best friends, one bike, a ton of camping equipment, chill in the pits and then, every once in a while, take to the track and battle it out with your fellow competitors. The team with the most laps at the end of the race wins. Just hope your bike doesn’t break.

I am going to get back to all of you on this because my time here has purely been as a spectator. I am going to do it and that is going to happen sooner than later.

Back to the Track at Hand

It’s already around 10pm and my friend Sarah is about to get out on the track, so she begins to suit up. One of her teammates rolls into the pits and hops off the bike. The team moves in to top off the tank, check key components and bolts. Sarah and Mike had a quick interaction; a chat among warriors said more with energy and haptic gestures than words. I could feel the team's camaraderie. Sarah moved into position, mounted the little XR100 and was off.

I got out onto the track to get some shots. What else are friends for?

When I got to the infield, Sarah and another rider were in a fierce battle for 5 or 6 laps. It was epic. Then I realized that I needed to take pictures and do my job.

Back in the pits lounging in a beach chair, jotting down notes and writing this article, it is almost 3am. To my right is the track, there's the sound of racers coming and going in the darkness, and to my left are the race pits. Jackson 5, Marvin Gaye, and The Temptations groove out of a Bose Sound Dock, a number of people are sleeping, a few others are organizing tools, and some are lounging around in fold out chairs and laughing about the tribulations of life. I have been here at the UMRA 24 Hour Endurance Race for 13 hours and the overall feeling is a paradox of excitement and calm.

All of a sudden there was a commotion coming from the tent across the way. Flashlights were out, tools clanged and shifted around, indiscernible and sharp phrases were relayed. Five men and a woman gathered around a bike, moving with purpose. It turns out an engine exploded on the track and a replacement was being swapped in. Within 12 minutes they were back out on the track.

I caught a second wind, but dialed it down and figured I would try to get some shut-eye. The sun would come up soon, it would be too warm to sleep during the day and some interviews could wait until morning.

While I was asleep, the team that exploded one engine had exploded a second. They were all sitting in their tent with metaphorical DNF stickers on their foreheads. One would expect them to be in a state of sadness, but this is motorcycle racing and it’s simply par for the course.

With smiles on their face they waved me over and invited my half-asleep, zombie walking ass over for some breakfast. I obliged and was treated to one damn fine breakfast burrito. It also gave me the opportunity to talk with easily the fastest guy in the grid that day, Ichiro Horabi.

I noticed Ichiro (aka “Ichi”) when I first started taking track photos. He had a very peculiar riding style and was scary fast. It was like he had ants in his pants. He would constantly move around in the saddle, never quite sitting still. At one point, I even thought I saw him reach down with his left hand to grab the shifter. Turns out, Ichi has broken/injured his left ankle so many times he has no dorsiflexion (upward mobility) ability and therefore cannot shift up through the gears. So, like the badass that he is, he upshifts with his left hand. I needed to know more.

Ichi has lived in the US for the last 15 years and began racing small motorcycles when he was 14-years-old (he is now 40). In Japan he competed for a number of years in the MFJ (Motorcycle Federation of Japan) in the 85cc class where he was the East Coast Champion. Later, he achieved the same success in the 250cc class. He would eventually end up working for Bridgestone, testing new tire technology for profession road racing series. When he came over the the US he raced more for pleasure than competitively and now owns a shop in San Diego. We spoke for the next hour about bikes, life, technique and mechanics.

The 12:00 hour rapidly approached, and marked the end of the 24-hour endurance race. The grid was substantially smaller than when the race first started, but everyone from the pits was out on the bordering fence in good spirits and cheering on the final group of racers.

I have to say that after being on-site for just over 20 hours, I am officially hooked and I want on a mini-moto bike as soon as possible. Keep an eye out for my next story as I have arranged a time to hook up with the UMRA and get a dose of what it’s like for a total newbie to get on an XR100 and rip around a track.