How To Motegi: A Guide On Getting To Japan's Greatest Race 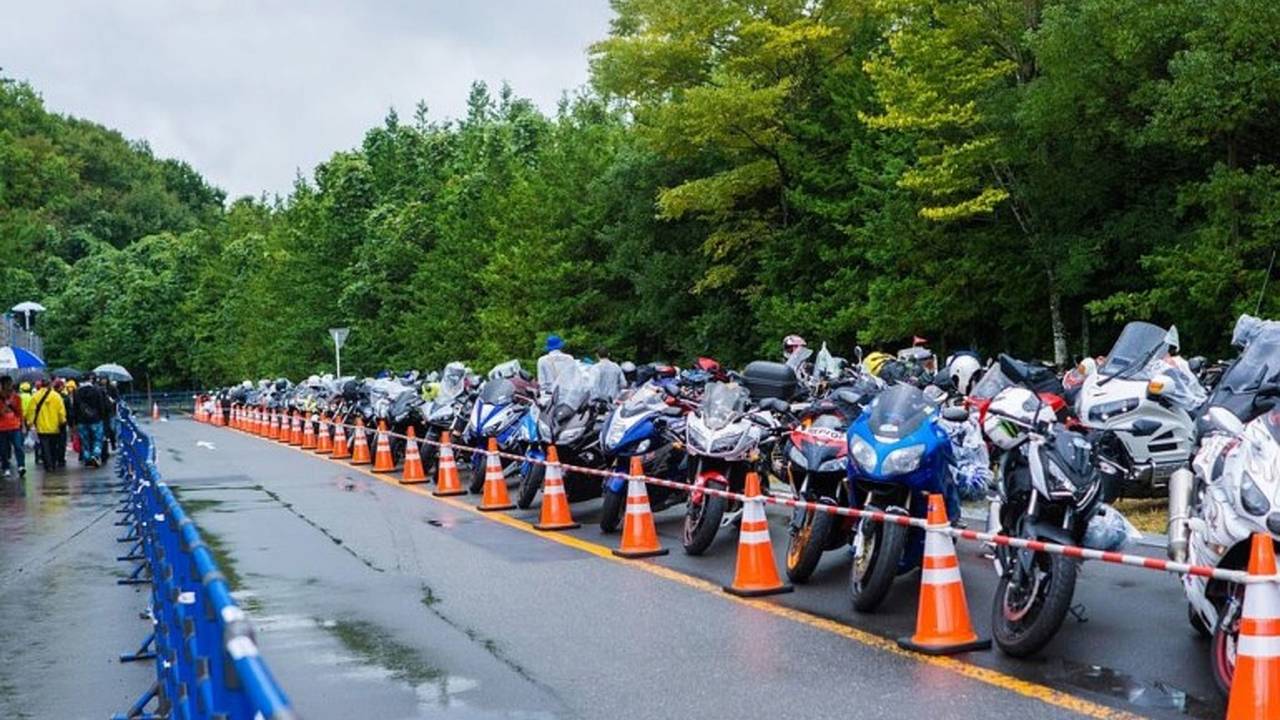 The Motegi Grand Prix may be the best excuse (of many) to check out Japan, but getting there requires some planning...let RideApart guide you.

A round trip ticket from LAX to Tokyo is $720. Thanks to a heated Rossi and Lorenzo World Championship battle, I bought one. I could only spare five days, and two of those would have to be travel days. I spent a day in Kyoto, another in Tokyo, and the last day attending Sunday mass at the Church of Honda: Twin Ring Motegi. The crucial piece missing in my hastily assembled travel puzzle was a guide on how to Motegi.

What do I mean by “how to Motegi?” You need transportation to the track, a GP ticket, and return transportation to wherever you came from (assuming you're not one of the 53 people residing in Motegi county). Sounds simple, right? I thought so, too.

Well… I can’t speak Japanese. Or read it. And after two hours of googling, I discovered that almost no concrete information on computerized Internet exists on how to get tickets or transportation to Motegi. What little information that actually does exist is buried deep in the catacombs of Trip Advisor and Reddit posts. Useful, but not the most official of channels.

I’m writing this in the hope that Moto GP’s PR department finds it as I had many questions that I could not find on Moto GP’s website. Where can I buy tickets to the Motegi GP? All other remaining grand prixs had tickets available, why was Motegi not listed on the Moto GP website? How do I get to Motegi since it’s secluded from any major public transportation? I discovered that there are possible shuttle buses from a town 20 miles out, but are they always running? What do they cost? How long does it take to get from Motegi to Utsunomiya via shuttle? Or cab? If I take a tour bus from Motegi to Tokyo, how long would that take? But most importantly: How do I purchase a ticket!? Oh, I already asked that...

How I did it

The short version: I took a bullet train from Tokyo to Utsunomiya, the closest train station from Tokyo, to Motegi. At the Utsunomiya train station, I followed signs for a shuttle bus downstairs, found one with an available seat and paid $20 for a trip to the track.

A week prior to the race, I used a travel agency to get my ticket and return bus from Motegi back to Utsunomiya. Upon arrival at Motegi, I met with my travel agent who handed me my ticket and return bus information. When the race was over, I walked to the Honda Collection Hall to catch my bus back to Utsunomiya Station. From Utsunomiya, I took a bullet train back to Tokyo. Easy, right? If you have the right cards in place then it actually is that simple.

The Ticket and the Travel Agent

If anyone with the slightest connection to Moto GP is reading this, please make this point clear to Moto GP: Foreigners have no f***ing help on how to obtain GP tickets for Motegi through the Moto GP website. Tickets were not available online. The closest I could find was a forum post saying that Moto GP offered them 10 days prior to the Motegi GP. About two weeks prior to the Motegi race, it was still the only remaining GP that did not have a “purchase tickets” button.

Through Internet channels that could be bookmarked under “desperation,” I found a travel agency, Estar Travel, who could get me a ticket. The travel agent gives you the option of picking up your ticket at their office in Tokyo, or at the track. I chose the latter, but if you have the time it may be worth it to just pick it up in Tokyo. If you pick up your ticket at Motegi, you’re going to need to be able to make calls to find the guy. If you must, make sure you’ve got a Japanese sim card with data and Skype credits.

The rumors I’ve read about Motegi tickets are that you can also pick them up at machines in convenient stores like 7-11. I didn’t see any machines with GP tickets at two different 7-11s, but that doesn’t mean it isn’t possible.

There are also several sites selling them online. Pole Position Travel was one I found that seemed to have reasonable prices, and they also offered tours. Although they advertise for tours, you can purchase just the tickets on their site. The easiest solution would be Moto GP offering the option to purchase tickets on their site, and emailing an e-ticket that could just be scanned from my phone at the GP. It’s on my Motegi wish list.

Motegi is about 20 miles from the Utsunomiya. This is important because if you’re coming from Tokyo, Utsunomiya has a bullet train stop. From the Tokyo Station, it’s under an hour and a half bullet train ride. If, like me, you’re catching a flight after the race, there is a business in the Utsunomiya station that will hold luggage until 9pm for about two dollars. I cannot stress enough the efficiency of Japanese public transit and the convenience of every major station having food and reasonably priced storage lockers. I can’t speak or read Japanese, yet it’s the easiest time I’ve ever had using a major city’s trains. Don’t let the language barrier scare you if you’re considering this trip as Japan is an english-friendly country.

From Utsunomiya Station, you need to get to Motegi. If you’re not up for the 20 mile walk or hitchhiking adventure to Motegi, it’s shuttle bus time. When you come down the escalator into the station lobby, you’ll spot a  “something something Moto GP something something   →” sign. Follow “→” outside, down an escalator to the local bus stand. You’ll see several confused foreigners in VR46 shirts trying to decipher the Japanese bus schedule.

If you’re coming off of the escalator, keep walking straight on the sidewalk and you’ll see several shuttle buses where the sidewalk curves right. Pay a cool $20 to the Moto GP shepherds and enjoy an hour long bus ride to the Church of Honda. You’ll be dropped off at either Information or the Honda Collection Hall. Information is right by the gates and the stunt rider show, while the Honda Collection Hall is a museum of Honda’s finest automobiles, motorcycles and Asimo robots.

HCM is a short walk down to the track gates and you’ll also hear the Moto 2 bikes on arrival. If you’re dropped off at Information, it’s definitely worth the seven minute walk from the gates to check out Honda’s little collection.

Motegi, on a soddened GP Sunday, will pack 50,000 in the stands. If Lorenzo is losing quick ground to Rossi in a rain race where Pedrosa is about take home his first win of the year, you may be hesitant to leave early. The cost can be an hour or more of waiting for a passage onto a Utsunomiya shuttle bus. On top of the wait time for the bus, the ride will take a little under an hour and a half to get back to the station. Also, shuttle lines are wrapped around the building.

If you’re in a rush to get back to that bullet train, you have another option: travel agent. This is a tool I’ve never utilized until this race. It was definitely a time saver to have a travel agent book a bus for me. They’ll get your name on a list, and when the race is over you simply head to the buses and cut the long lines, point out your name, pay another $20 and you’re on your way. The trip back to Motegi is a bit longer due to traffic. I used the same travel agency, Estar Travel, that I used to buy my ticket. I highly recommended, and you can email them in English.

Bullet trains run fairly often from Utsunomiya to Tokyo. Check the schedule, Google Maps, whatever, but most likely you’ll be able to catch a train within 15 minutes of your arrival. I actually went ahead and got my return ticket when I first arrived at the station. My shuttle bus parked in front of the Station at 4:53, but Japanese travel is so damned efficient that I still retrieved my luggage and made my 5:00 bullet train with time to spare.

There are several options for getting tours and making a weekend out of the GP. On top of manufacturing motorcycles and pianos, Yamaha also has their hat in the travel agency arena. They can set you up with transportation to and from Tokyo, a GP ticket, and some Yamaha swag. My Trip Advisor research (thanks user Sunflowergirl01!) has led me to a $220 price total. This does add travel time as the bus is slower than the bullet train. With traffic, the bus ride from Motegi may not arrive in Tokyo anywhere between 8-11pm, but you’ll have an opportunity to hang with fellow GP fans and have a few meals along the way. Yamaha only takes 40 people, so sign up quickly. I emailed Yamaha about two weeks prior and they were already sold out.

I read forum postings which said Ducati and Honda offer similar tours. Unfortunately, that information is hard to come by. Pole Position Travel also offers several packages. Through them, you can get full weekend packages for the practice sessions and access to the Moto GP village. Most sites, including Pole Position Travel, offer paddock passes.

Is it Worth it?

In a nutshell, that’s how you do the Japan Grand Prix. The bigger question is whether or not to fork over the money. From LA, it’s a relatively cheap flight. You can tackle quite a bit in Japan in a short time span thanks to excellent public transportation. In three days, I walked amongst snow monkeys, saw the Geisha girls of Kyoto, wandered through temples, survived the Shibuya Crossings, and drank plenty of Tokyo craft brew. And even without any of that, I took a seat in the Z section of the Twin Ring to view one of the greatest races of 2015.

Motegi gets rain and it's close to the end of the season, so the races are thrilling. Even with the pouring showers, hundreds of riders showed up on bikes (the crowd is full of hardened riders.) If you’ve been looking for an excuse to check out Japan, Motegi might be the best excuse of them all.