Slimey Crud Run Rocks On Without the Sun 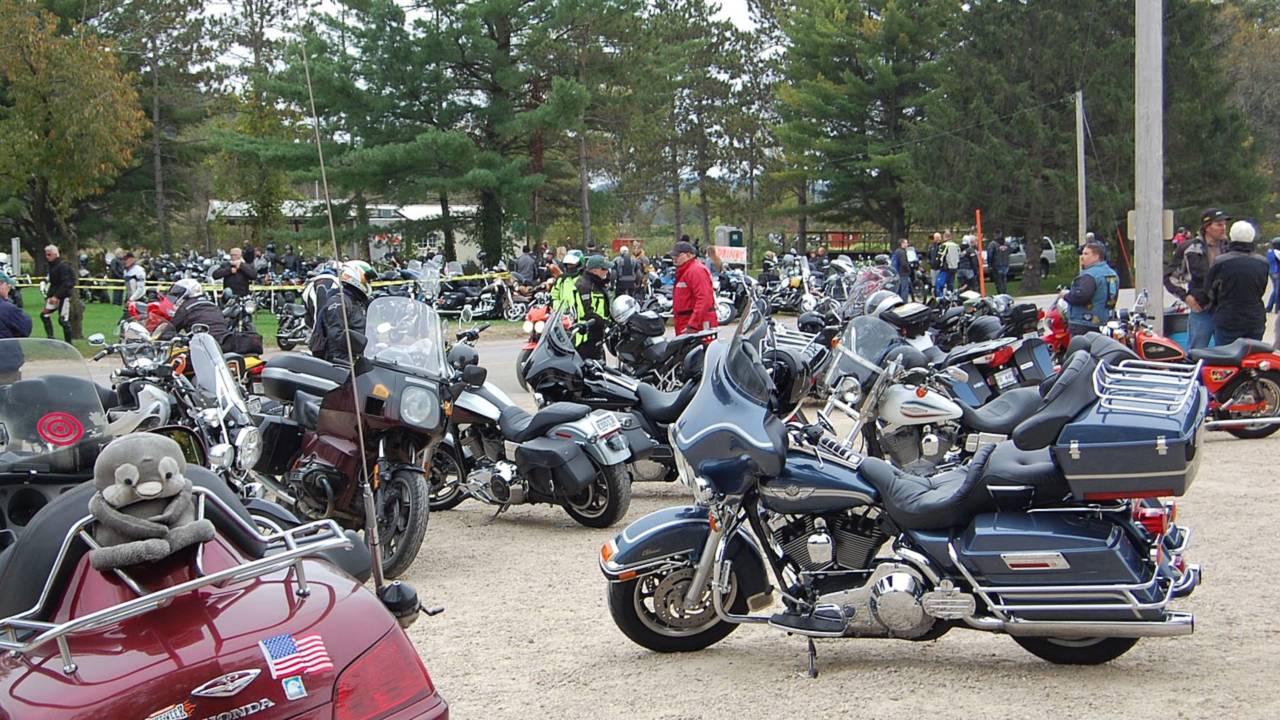 Despite gray skies and temps that never reached 60 degrees, the fall edition of the Slimey Crud Motorcycle Gang Café Racer Run attracted more than 1,000 riders (our estimate) and rigs of all descriptions showed up.

As is customary for the event, riders gathered on a cool, gray Sunday in October (Oct. 4) in the tiny village of Pine Bluff, WI, which is located Dane County. By late morning, most parking areas were near capacity and a lot of bikes were parked on the street as well. While the number of riders was clearly down from past events, when the forecast projected sunny and warm conditions, it was still an impressive turn out for this non-sponsored, grassroots event.

In the spirit of the Café Racer Run: the Honda CX500.

The attraction of the Slimey Crud Run—apart from its organic, spontaneous nature—is that it's something of a rolling bike show. You see all manners of motorcycles, riders and riding gear: Cruisers, sportbikes, street fighters, rat bikes, classics, adventure bikes, side hacks, sport-touring, race bikes, bobbers, and choppers from all points; Euro, U.S., Japanese, British, you name it.

You don’t see many Sportsters as the platform for a trike conversion.

If every bike that shows up just stayed in Pine Bluff, it could take several hours just to get around town to see them all, let alone get a chance to talk to some very interesting enthusiasts about their bike, their gear, and the ride. Of course, most of the bikes are in Pine Bluff for only an hour or two before taking off on the various routes that lead to the rally end point in the village of Leland, in neighboring Sauk County.

In recent years, the Wisconsin State Patrol has stepped up efforts to educate riders about safety and the “Transportable High-end Rider Education Facility” (dubbed the REF) is a great part of that.

Route options include a more-or-less direct route along County Trunk Highway P to Highway 14 to Highway 78 to Highway 12, out along CTH PF to CTH C and Leland. Riders also take advantage of the more convoluted but paved town and county roads that fan out to the west toward Spring Green and beyond. Done properly, riders can spend several hours meandering the back roads and farm country before riding into Leland.

Several Ural sidehacks showed up including this late model.

At Leland, it’s time to unwind, let the motor cool off and circulate some more to see the bikes you missed in Pine Bluff, or the ones that joined the run in between the towns.

Leland features a beautiful pond, a trap shooting range and two bars, including Sprecher’s Bar, which was one of the main reasons the run has historically ended in Leland.

This Harley-Davidson flathead Servi-car got a lot of attention.

As the afternoon light dimmed through the cloud cover, it was a reminder of the days growing shorter and that this was the last major motorcycle gathering of the season for this area. But even as the Crud Run drew to a close, some riders could be heard making plans to attend the spring renewal of the Crud Run on the first Sunday in May, 2016.