I spent the last few years really wanting to take my Scrambler off road and test out her abilities.

I’ve had this concept for a while now that I like to refer to as the “Adventure Scrambler” (or ADV Scrambler). Why can’t I take my neo-classic nearly anywhere that you can take your adventurer? My 2012 Triumph Scrambler has knobby tires, moderate (albeit not great) ground clearance, and decent low-end torque. Aside from poor lighting, a lack of any modern convenience (e.g. ABS, traction control, somewhere to charge a GPS, etc.), and generally not being built for “off-roading,” I figured most Scrambler owners would be diving into at least moderate adventure scenarios. I couldn't have been more wrong.

I spent the last few years really wanting to take my Scrambler off-road to test out her abilities. Unfortunately, time and time again, I met people who said, “No way would I ever do that with this bike!”

Well, in a stroke of fortuitous timing and serendipity, I moved to Colorado (ADV capital of the USA), met a guy named Ray in a bike store (after I spotted him carrying some Scrambler tires), met a guy named Chris (after commenting on his sweet panniers on a forum) and suddenly this trip was being planned.

Ray, Chris, a guy on a KLR (or was it a KTM?) and I planned to head out for a two night, three day off-road moto-camping adventure through the backcountry of Colorado (~1000 miles). This would allow for a proper round-up of the Scrambler. Ray would likely be the minimalist, traveling extremely light with a top box and tank bag. Chris would be that guy who should have bought a BMW with full 20L panniers, duffel bag, tank bag, and kitchen sink. I would likely be the unfortunate hipster in the group—poorly attempting minimalism with a bike truly setup for street riding.

From my tire selection to the bar end mirrors I intentionally left on for looks and knowing I may drop the bike, I was sincerely and pretentiously unprepared. The KLR guy would be present solely for the sake of comparison. 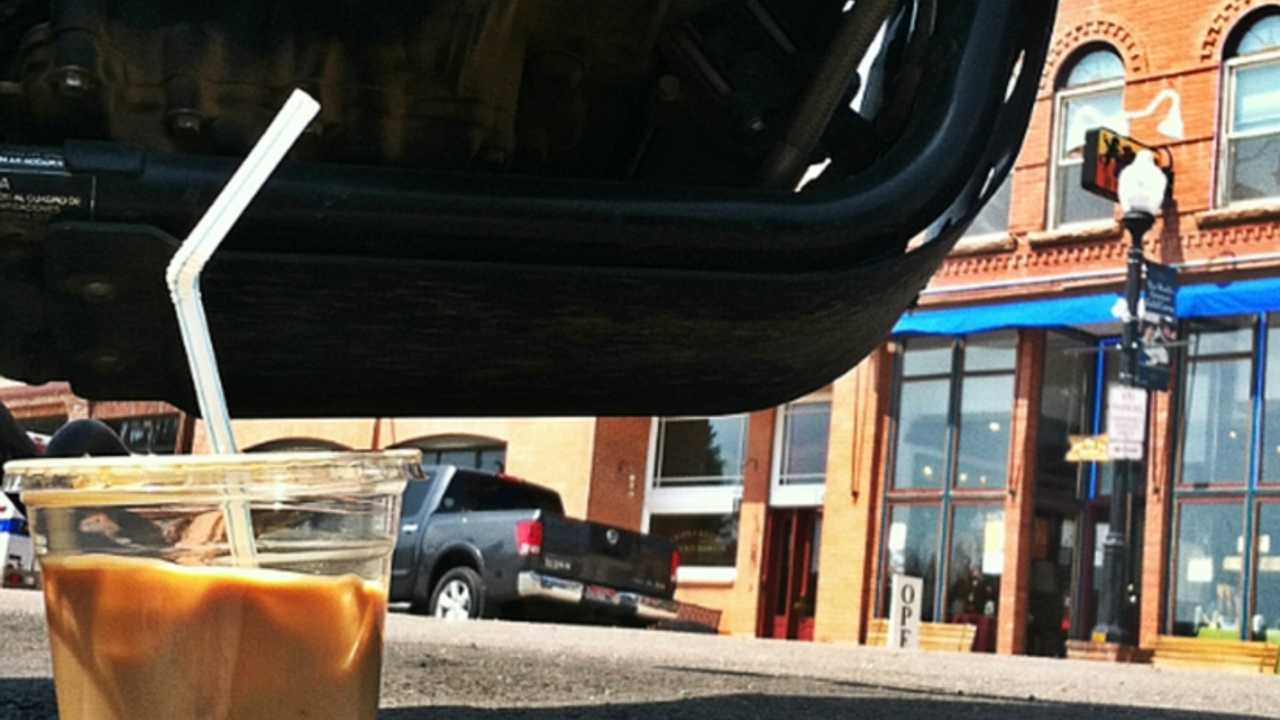 The first day of our trip came around sooner than I expected. I spent the better part of the night before trying to get all my gear into a single duffel bag. We all met up early on a Friday morning, and from the very beginning things changed. Our friend with the KLR dropped out, and apparently he hadn’t told his wife about the trip until the night before. Simply owning a KLR doesn't mean you can take off on an adventure at any point and time—there are these things called commitments to be considered. Then, Ray had family and work things come up at the last minute, so he could only join us for half of the first day: no camping, no day two, no day three. My plan for a full round-up of our different approaches to camping and adventuring on the Scramblers, with a comparison to the KLR, had died in a matter of minutes. It’s probably best to plan for the unexpected anytime you’re voyaging out into the wild, but this isn’t really what I had in mind.

READ MORE: What To Pack For Your Motorcycle Trip - Moto Adventures | RideApart 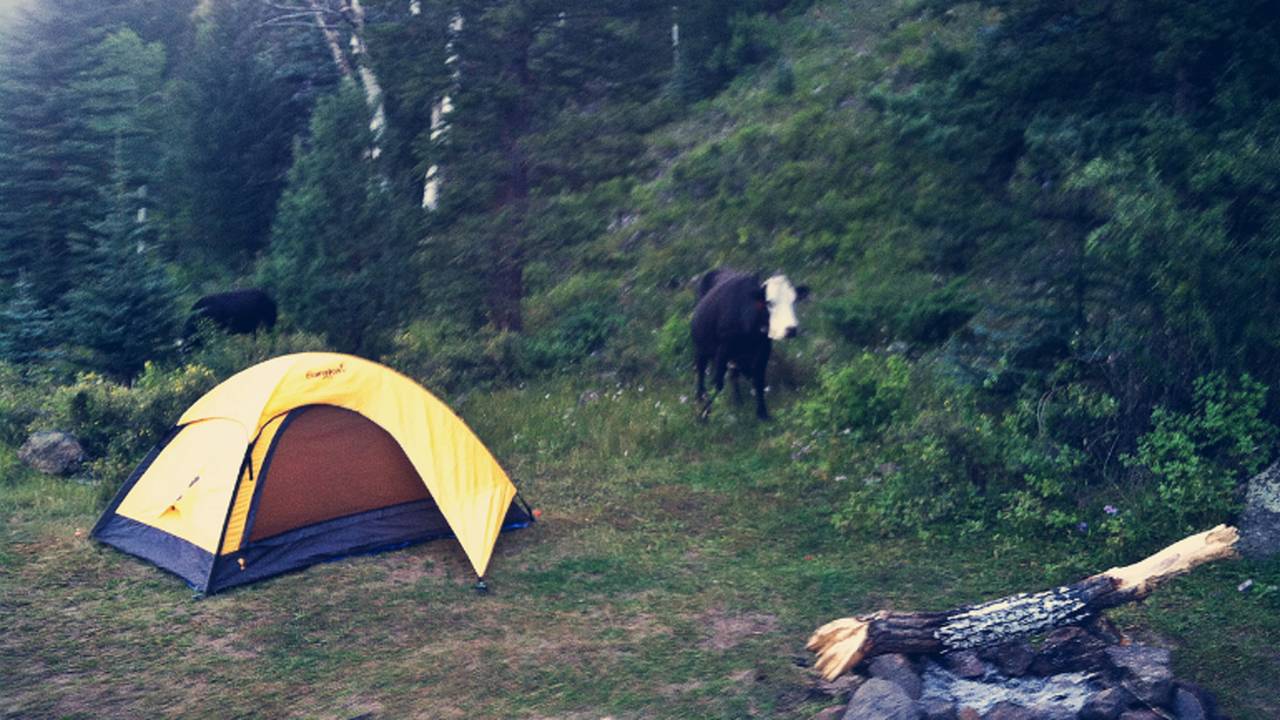 Chris and I decided that two guys hauling ass down the mountain was a bit more expeditious anyways. The first day we planned to travel from Denver to just outside of Lake City. The majority of the day would be off-road.

Prior to this trip I had very little experience off-road. I've never ridden a dirt bike, and I had rarely pushed the Scrambler off the pavement. However, Chris has a background in dirt bikes, and he had taken his Scrambler on these kinds of rides many times with the KLR guy. Ray was the most experienced of us all, having ridden many bikes—dirt and adventure, including the Scrambler—in these kinds of settings. The majority of the first day we fell into exactly that order – Ray first, Chris second, and me dead last. My initial impressions of the Scrambler off-road were fairly good, but not confidence inspiring. I spent too much time sitting down and relaxing in third gear so I decided that after Ray left us, I would try to push a little bit more. 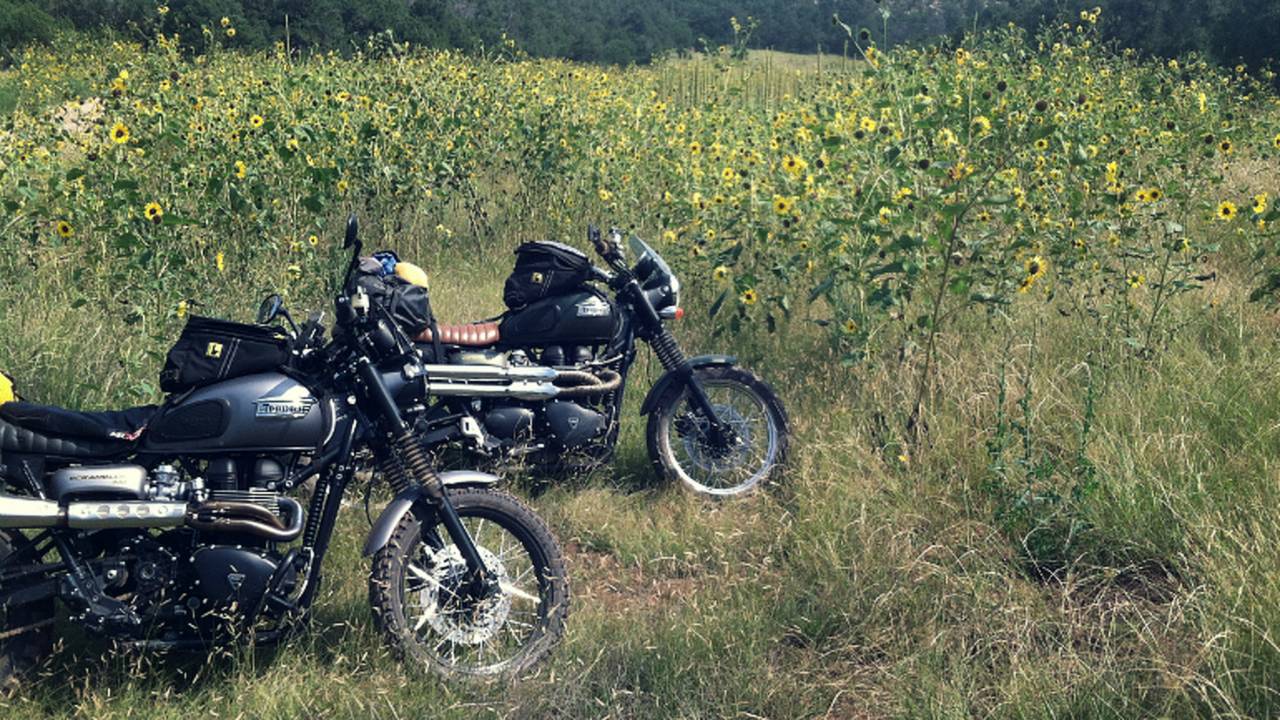 This is when things really got exciting. Standing up and revving through rock fields, it appeared as if I was traveling over some boulders and through pits that surely this bike couldn’t handle! I really started to find some confidence until I hit a pretty good patch of sand traveling uphill. I was trying to get over some rocks and was maybe moving around a little too much, and BAM! The rear tire jumped sideways.

Fortunately, my instincts were to simply throttle through, which is exactly what I did. The bike stayed up and we kept moving—no big deal. These are everyday occurrences for anyone who goes off-road, but if you’re a street rider, on a primarily street bike (and at nearly 500lbs), it takes time to get comfortable.

Really comfortable and confident, with the rear wheel sliding and the stock suspension somehow absorbing some of the blows, I found the limit.

We came upon an area that was really torn up by 4X4s after some recent rain. Huge mud pits full of water and wet dirt dotted the road ahead. Chris and I took some time to find a good line and really thought about if this was something we wanted to tackle. I figured that we needed to do this. Chris figured I should go first—maybe he knew what was coming.

About 10 feet into my intended path, I got stuck. I rocked back and forth and was able to move forward another five feet. This had placed me a little higher and further along than I wanted. I knew what was coming, but pushed on anyways. Another foot forward, my front fork completely turned to the left in an attempt to get back on to the path. I dropped the Scrambler. 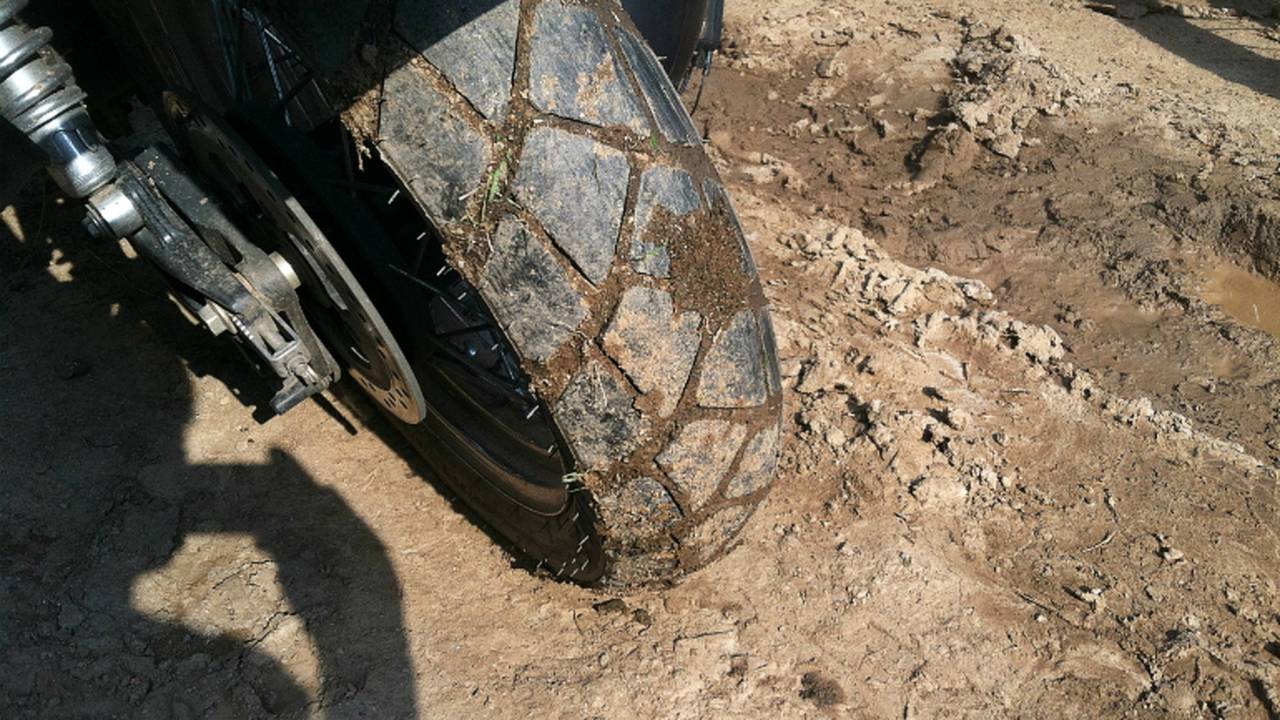 It took an ungodly amount of time and energy to push the bike out of the mud. In our postmortem of the situation, Chris and I both agreed that a few things made this inevitable. Most importantly, I had zero off-road experience, and in reality, probably chose a horrible line and didn’t maintain enough speed. Secondly, I was riding with Metzler Tourances, a 90/10 and poor choice for thick mud. Granted, the Tourances really impressed us both on just about everything except, obviously, the mud.

On day one, we had found the limit of the ADV Scrambler: thick muddy trails. Though I still maintain that given a second chance we could have made it. Additionally, we had overestimated how much off-roading we could do in a single day. We camped just outside of Salida, about 150 miles short of our planned destination.

The second day went much smoother. We had already knocked some miles off the journey by simply not making it to Lake City the day before. We traversed steep cliffs and more boulder fields. Everything we rode up, we had to eventually ride down. If there were a single weakness of the Triumph Scrambler, it would certainly be in braking. This is true on and off pavement, but it's a lot more evident when going down the side of a mountain and needing to slow down a bit. I never dropped the bike a second time and Chris managed to stay up the entire trip. 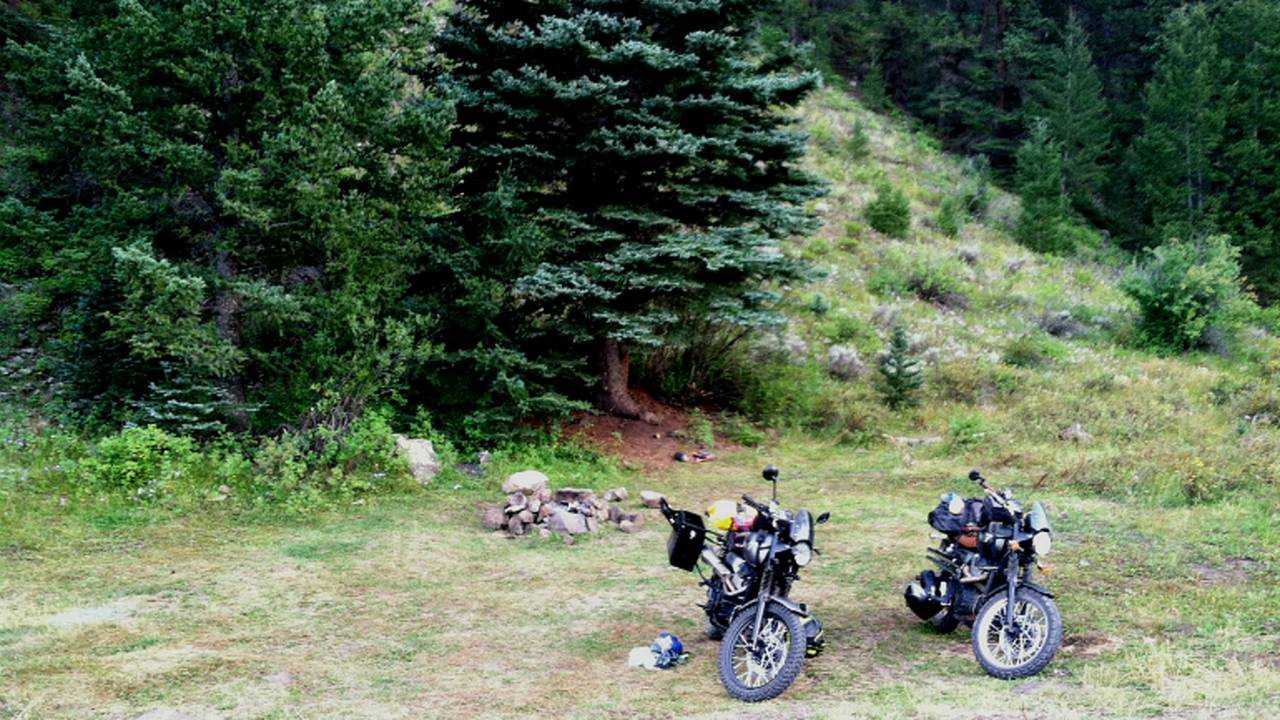 Our third and final day was heavy street riding because we needed to get back home. We hit some seriously awesome pavement, but something just wasn’t right: We weren’t really enjoying it. After two days of gravel and dirt and even a little mud, the street just felt a tad… boring. Carving through the twisty mountain roads, I dreamed of backcountry technical challenges. My concentration wandered off occasionally with how trouble-free everything felt in comparison.

The Scrambler fared very well throughout the entire ordeal. One myth is that you really can’t get enough gear fitted onto these bikes for backcountry travels. Well, we camped the entire time and Chris rode the entire trip with big metal panniers. Another myth busted! His bike handled the weight really well. I had probably a quarter of the weight in gear with my duffel and city bag, but at no time did the weight on Chris’s bike appear to make much difference. Full disclosure though: Chris’s bike is outfitted with Progressive springs and Hagon rear shocks, which probably helped a bit. My bike absorbed everything on the stock suspension. 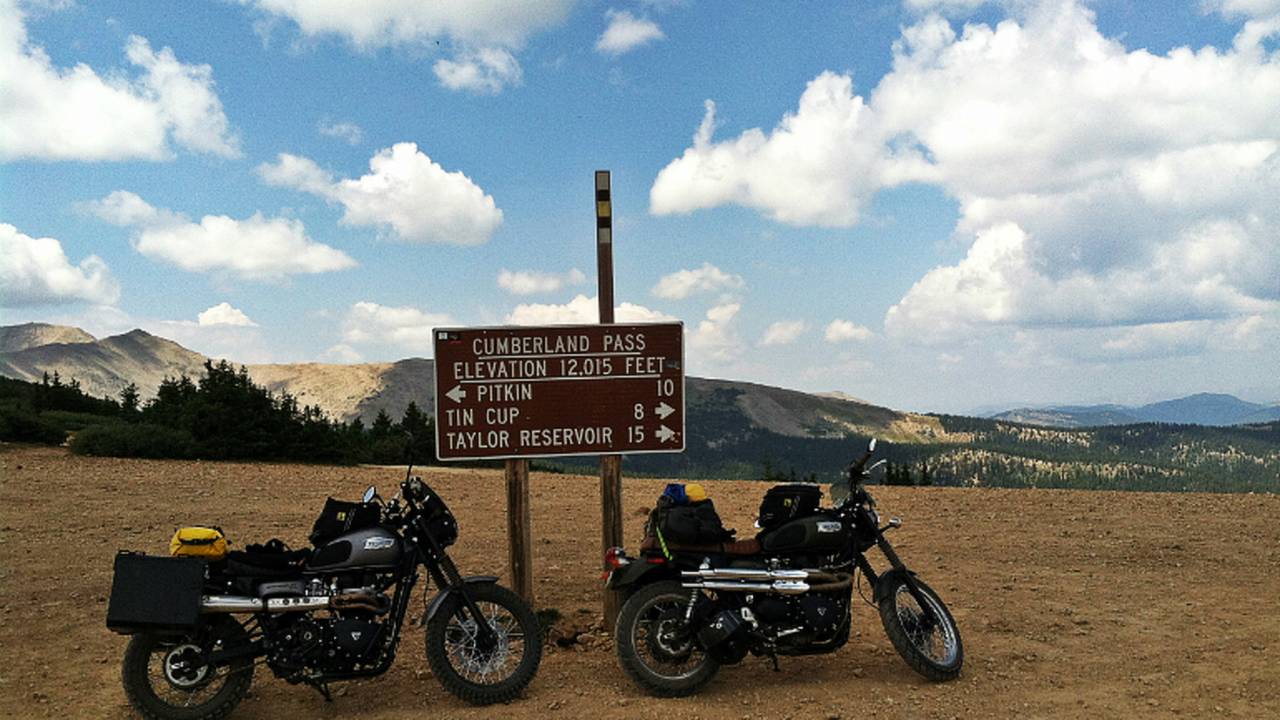 While I realize all this may not sound revolutionary, our forray into the ADV Scrambler concept was a success. It can be done. If you dig long and hard enough, you’ll find videos of David Beckham and others doing this sort of stuff with Triumph Scramblers (yes, I realize Beckham was technically on a scrambled Bonneville) and now Ducati Scramblers.

However, the difference here is that I commute everyday to work on the same bike. I purchased this bike new in 2012 and have since put about 20K miles on it. We carried all our own gear; there were no support vehicles. We planned our own route; there wasn’t a team of people in the background thinking “this will look good in the video.” If I can do all this with my Scrambler, imagine what someone with a little experience can do (oh wait, Ernie Vigil made a video of that, too.) 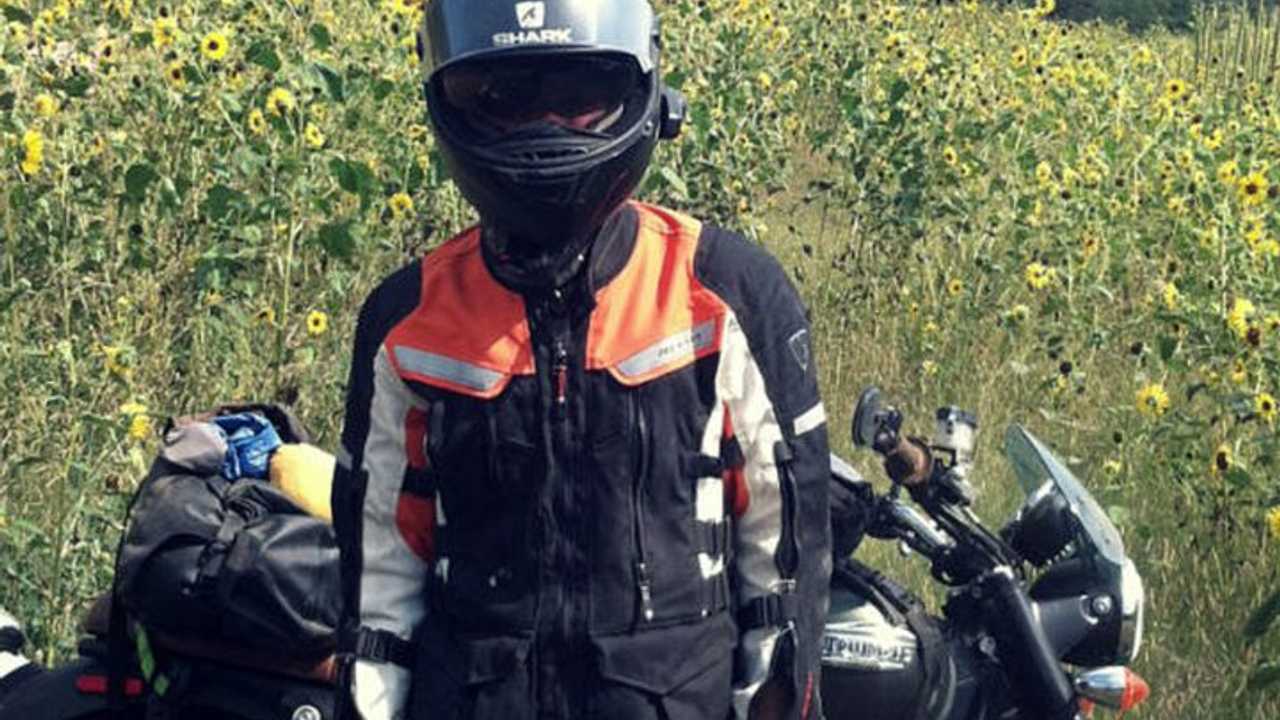 Are you asking what my point is? If you’re considering getting a Scrambler and want to do some adventure riding please proceed. These bikes aren’t relegated to celebrities or hipsters. They’re genuinely capable machines, even in the hands of amateurs and noobs (and maybe even hipsters). Just be careful in the braking. The only real problem you may have is convincing everyone else that your bike performs well in the grit.

Check out the video of our endeavor below:

By: Peter Streusel
++
++
Got a tip for us? Email: tips@rideapart.com