Well, Vintage Honda 550s are like potato chips... Shoot, next thing you know there are four idiots planning a trip to Mexico on some crappy old Honda motorcycles...

What we have here is a failure to plan... or a plan to fail... I'm not sure which, but we're going to have fun: we're going to drink, carouse and generally blow off a bit of steam... Or not. And we'll have an exercise in mechanical mayhem. We know the truth, since the trip has long been over, but we'll let it unfold for you as it happened. Basically it's going to be 4 idiots riding to Mexico from Southern Alabama and back, sorta...

The back story... As a heavy smoker (3-4 packs a day), I'd got on a bike and rode for 3 days to quit. I came home without the habit, but the addiction was brutal. One of the things I'd promised myself is that if I made it 1 year without a cigarette, I'd treat myself to another bike trip, but one of epic proportions.... something serious... like Belize or some silly poop.

I had this cool little 550 Honda that I'd been whittling on and it was more then adequate for running around town and showing my ass. Hell, it got to the point that I really liked the stupid little thing. Reliable, fun, light wieght, and kinda sexy (oh, come the hell on... I'm telling this story). So anyway, since it was old, I thought I should get myself a parts bike…

Well 550 Honda's are like potato chips, you can't have just one. So, I decided I needed a parts bike. Freaking eBay is going to be the death of me... (or so my wife says – she really used a term just like that.) And she might be right. After buying three “parts bikes” on eBay, I had four running 550s. 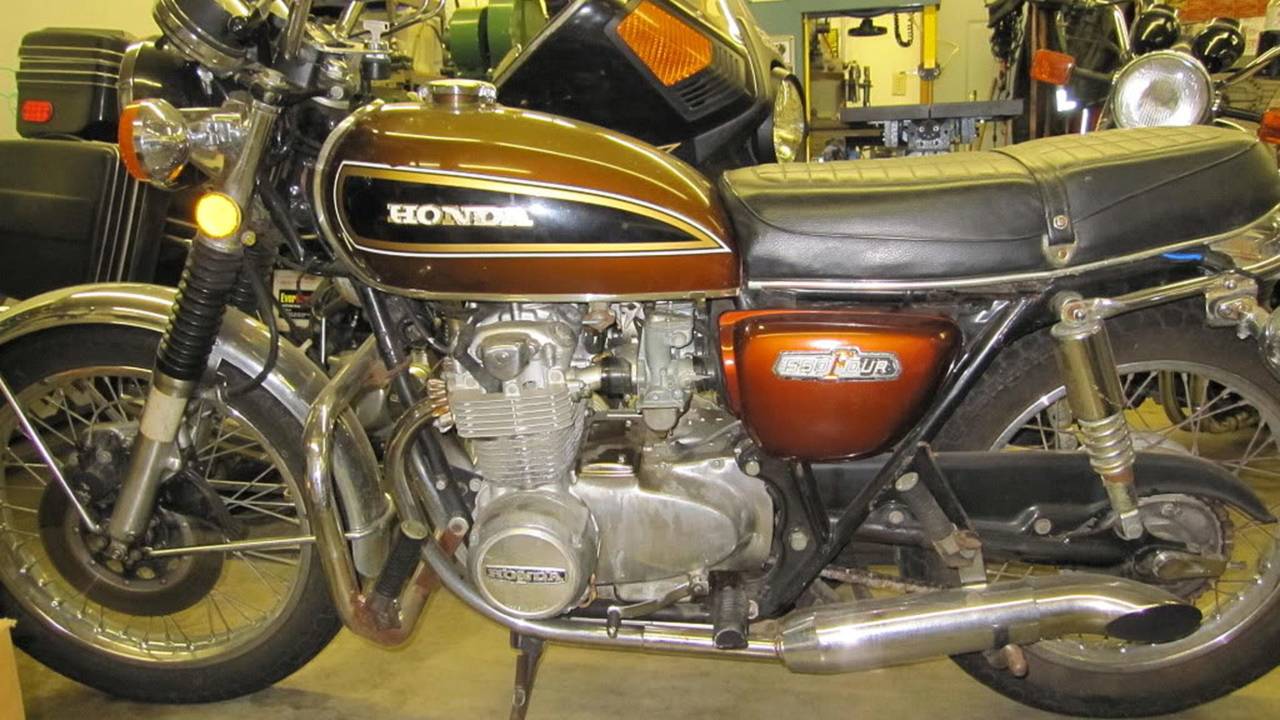 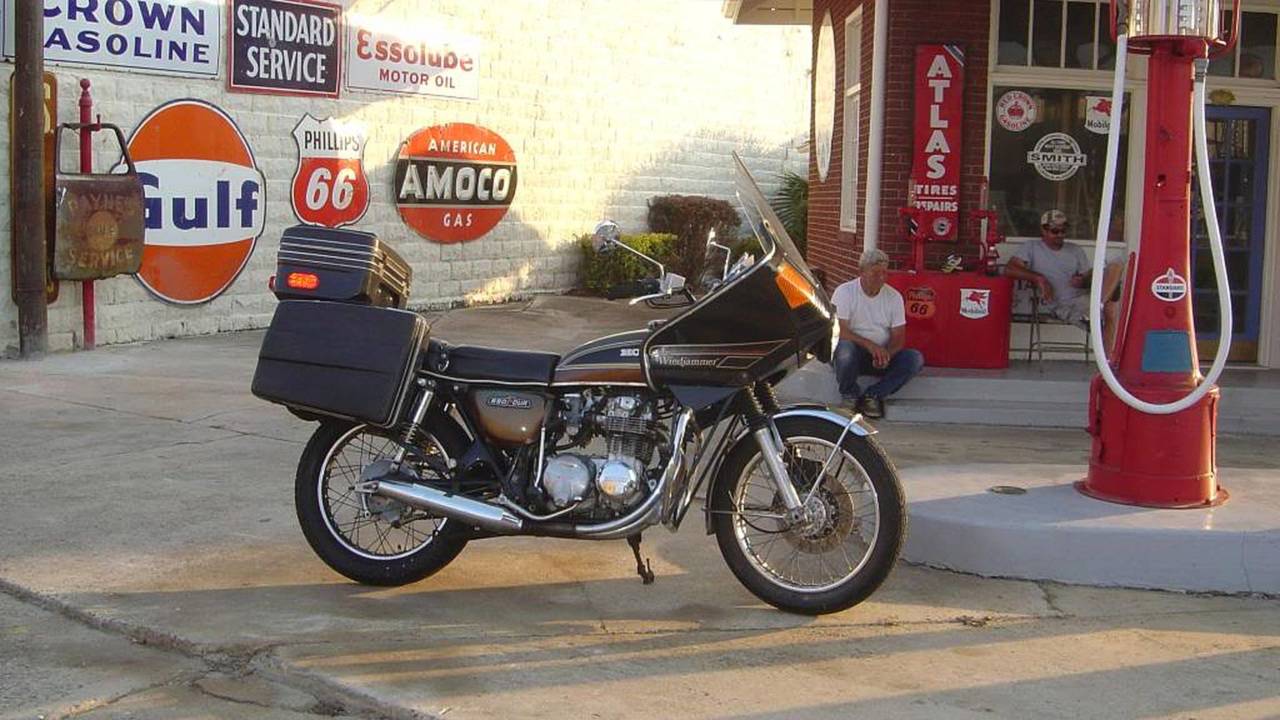 It being almost a year since I quit... I had this brain-dead scheme to run off to Mexico on a bike. I called this friend of mine who lives in New York City (I mean IN NYC, like he's got no car) (we'll call him Mark, cause that's his name.) We get to yacking, and he's got a hankering for a scooter trip as well, and frankly he's known for his long distance scooter rides all over the country. So we chat it up and kind of decide we ought to take the Hondas. Shoot, since I have four, maybe we should get Steve and, oh, hey I'll bet I can convince Paul into this. Shoot, next thing you know there are four idiots planning a trip to Mexico on a bunch of crappy old Hondas. 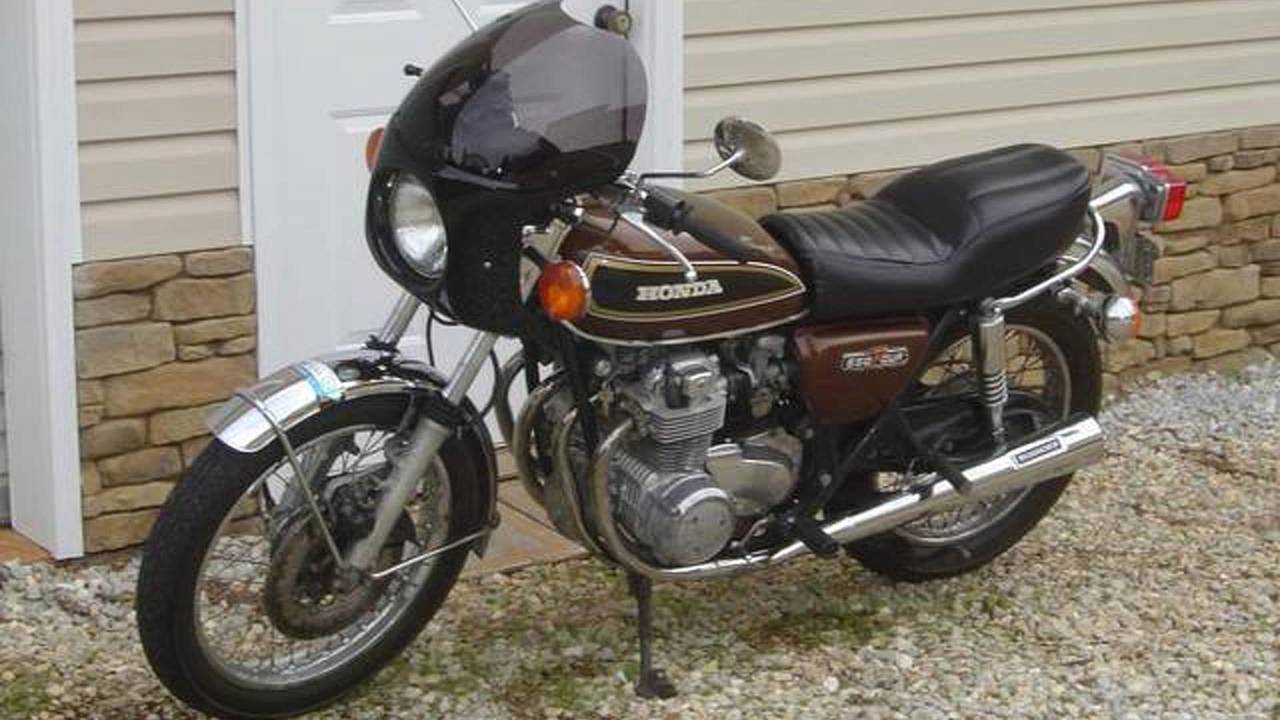 Mark is our New York connection and he's a retired Lawyer (banking, but we'll take whatever legal help we can get). He's also a hardcore small-bore motorcycle racer, and one of our starters at the Maxton Mile.

Steve is an Ex Pat that Lived in Australia forever and is a devoted Harley rider, a worked-in-a-scooter-shop kind of guy. He's great with his hands, but mostly doing paperwork stuff now. Steve is from Daytona Beach Florida – also a starter at Maxton with the ECTA.

Paul is a real life Nurse, and we all know this thing is going to need a nurse before it's over with. He's been on Drag Week with Hot Rod Magazine several times and we've just kind of hit it off. He's an old school Harley guy as well, from Kansas City Missouri.

Basically, it fell on me to make them run, and lucky for me I had Scott Korol and Stormy's Garage as a base camp. Scott is outfitted with a brand new high-tech DynaJet with all the goodies and he's extremely competent on it. So first thing's first: make them run well, or at least make sure they are all motorcycles...

Hmmm, guess we ought to get some tires and chain as well. So, we order it all up in bulk and nothing but the finest Chinese stuff for our trusty steeds. Scott even makes me get new tubes (they go in the black tires. Both of them).

So, we get these tires in and I go to work. All the bikes get new shoes and chains and we dyno them all, with varying degrees of success. Honda’s 1-3 are fairly equal around 35hp at the rear wheel, but #4 sucks out loud. We get some jets in it and work it pretty hard and end up at 39hp... no kidding. A lot like a motorcycle, only down, say 50hp.

READ MORE:  Living the Ducati Life… If Only for a Day

One of the significant points of this program is the bucks-down aspect. I'm just tired of everything costing a bazillion dollars. Since I get to pick what I call fun, it's bucks down. Less then $500 per bike, and ultimately they are going to be fairly reliable, or not, and that's the fun.

Hopefully we'll have more zen than motorcycle maintenance, but who knows. I'm simply out to prove it's not about what you make, but how you spend it.

We're not going far into Mexico – as much as showing up at the border and saying we've been there. The trip is the goal, not the destination.

So Steve got here yesterday and we immediately went to riding. Of course, he was riding too close behind. And now the guy wants me to use turn signals (of all the nerve, geez). I guess I'm not suppose to keep secrets or something. You meet the nicest people on a Honda.

Anyway, we stuff a couple of tires on the last scooters that need them and we did a seat, tank and float bowl-ectomey, which included a jet-ectomy as well as a swap of intermediate jets. We went out testing at night and lost two head lights on #2 and #3. Bike #4 seems to have liked the jets... (More testing to follow) #1 is a thing of MF beauty, as David would say, so I'm not messing with it much yet .

Man we worked it today. Oh, and it worked us. Well, Steve anyway –  for me it's just another day on the ole Dyno. I checked the float levels, jets and so on and so forth.

I felt like a total rookie, but ultimately we won and the "Jamm'in Famliy Truckster" (#4) got way bigger jets and was quite the happy thing. It made six more HP than all the rest, but it didn't give it up without beating us up.

Ultimately, I rode three bikes today and only one is left pissing with us –  #2 is just being a weenie. Got an electrical gremlin that we can bypass, but we're trying to fix it correctly first.

Tomorrow we'll do oil changes, jacking points on the side stands, and clean up. We'll also pick up our other riders at the airport in Hotlanta.

Okay, it's o'dark thirty, and I'm the only one up… my, what a shock. (For those of you who don't know me, I'm actually a very early riser, and I'm not good at sleeping. It's just the way I'm built.)

We picked up Paul and Mark last night. (They all whinned like little school girls over the weaving truck. Bitch bitch bitch....) Anyway, they met and fell in love with the Honda's. And hey, they signed up for this deification or goat fornificantion exercise (we were howling in the truck on the way home – Paul and Mark are going to be fun).

Paul was next to pick and he snagged #2 which was named "Big Easy," simply because it was a joy  (other than the head light that Steve fixed). The bike just worked and worked – still does, as a matter of fact.

Steve had a thing for the way the four-into-one pipe sounded on #3, so he picked it. And because of a noisy timing chain, he named it " The Rattler."

I was happy to end up with #4 because it's got the wind jammer and the bags, which was good because I carried all the spares.

Easy way to tell them apart: Cafe Ole – cafe fairing, #2, or the " Big Easy," has two-into-one down turned pipes, #3, The Rattler, has the four-into-one and isn't very pretty, #4, "the Jammin’ Family Truckster,” obviously looks like a super cool grand sport luxuray wagon.

Enough of that. We all had scooters and were set to change the oil and get the hell out of there. Paul, in the green shirt, is doing the oil on the Big Easy . 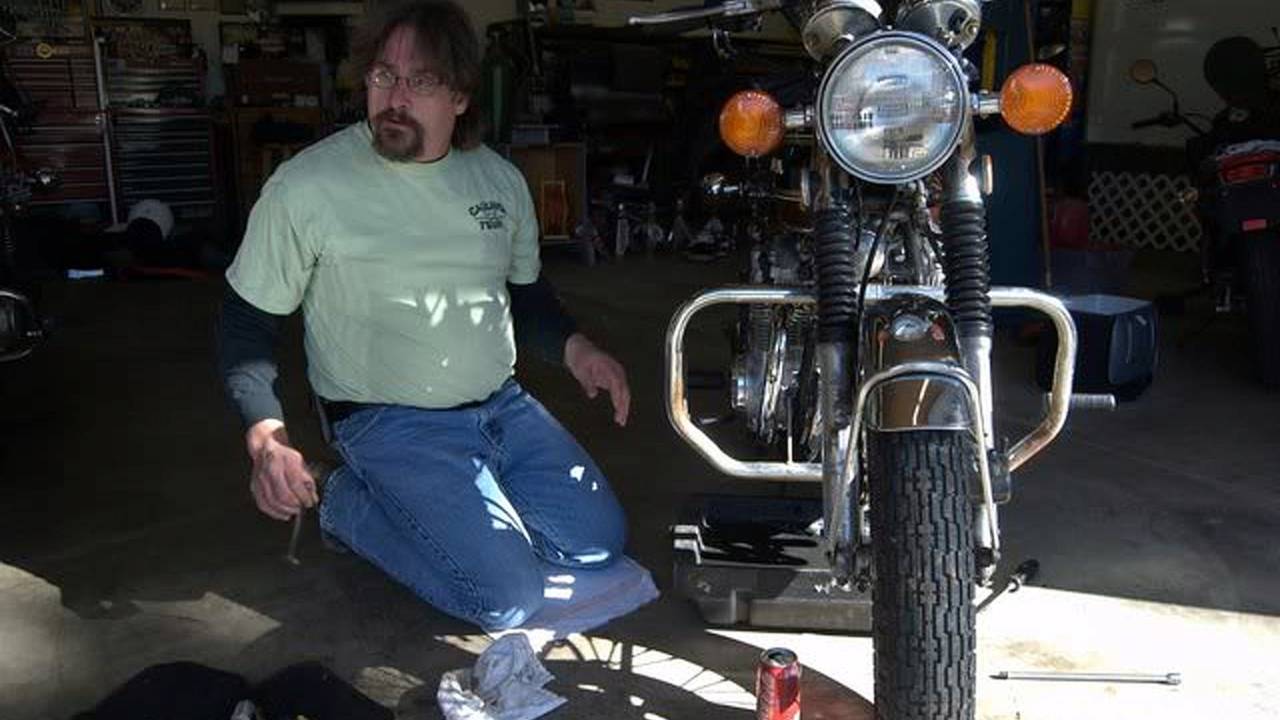 We meet up right down the street at the Bo Weevil monument. 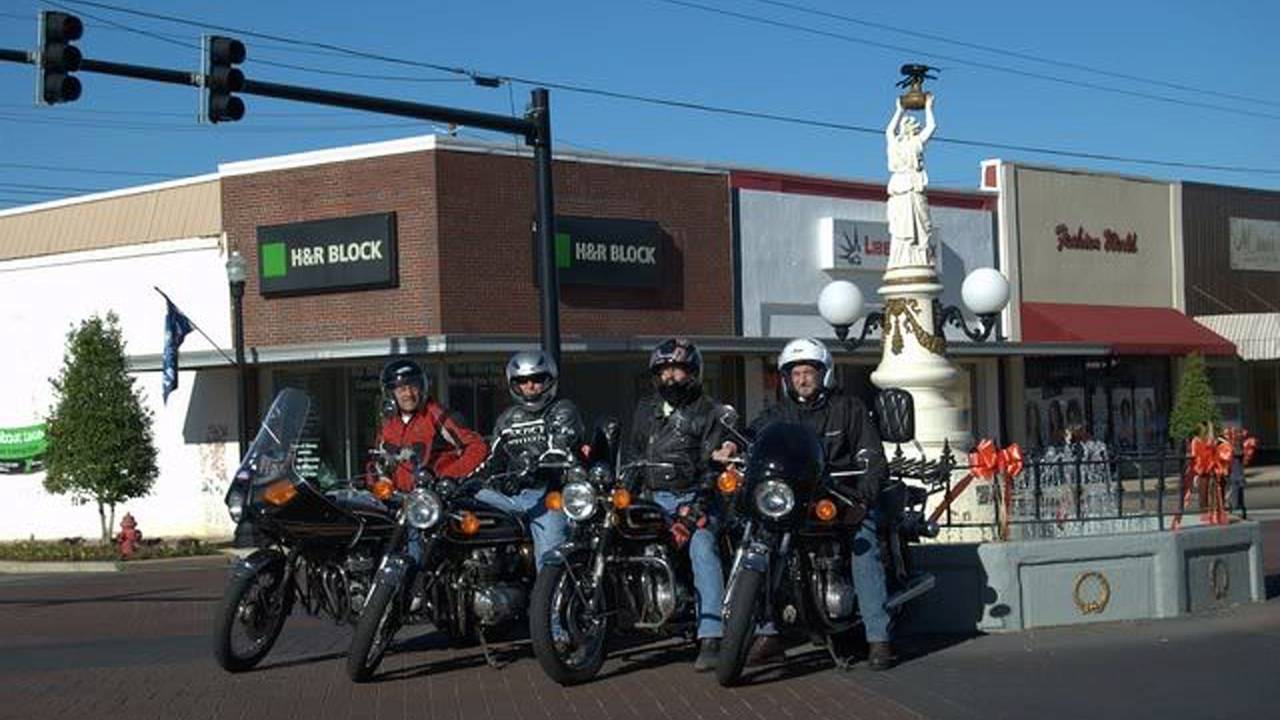 Dyno wise, they went from 29hp to 39hp at the rear wheel. The best starting Hp was my bike, #4- the Jammin Family Truckster. But it was also the most troublesome –  you'll see in a minute what I'm talking about.

On this first day of departure we had my normal riding partner, Willie Fisher, hanging out with us for the first half of the day. Matter of fact, Willie rode with us several hundred miles and bought our lunch at a really cool road house cafe. But first, the trouble started.

My bike just started slowing down. And since I was leading, everyone else had to slow as well. We got down a bit and decided to pull over and check it out.

We were less than 20 miles from our departure. I almost went home and got another bike, but that wasn't the point . This bike was going to make it to Mexico. PERIOD. Hmmm… (at this point I'm very okay with you calling me a dumb ass because the smartest thing I could have done was get a different scooter. But that wasnt' the point then, was it?)

Basically, we did a tank-ectomy, pulled the plugs, reset the points and cleaned the filters. In other words, we let it cool down and it was a happy thing. 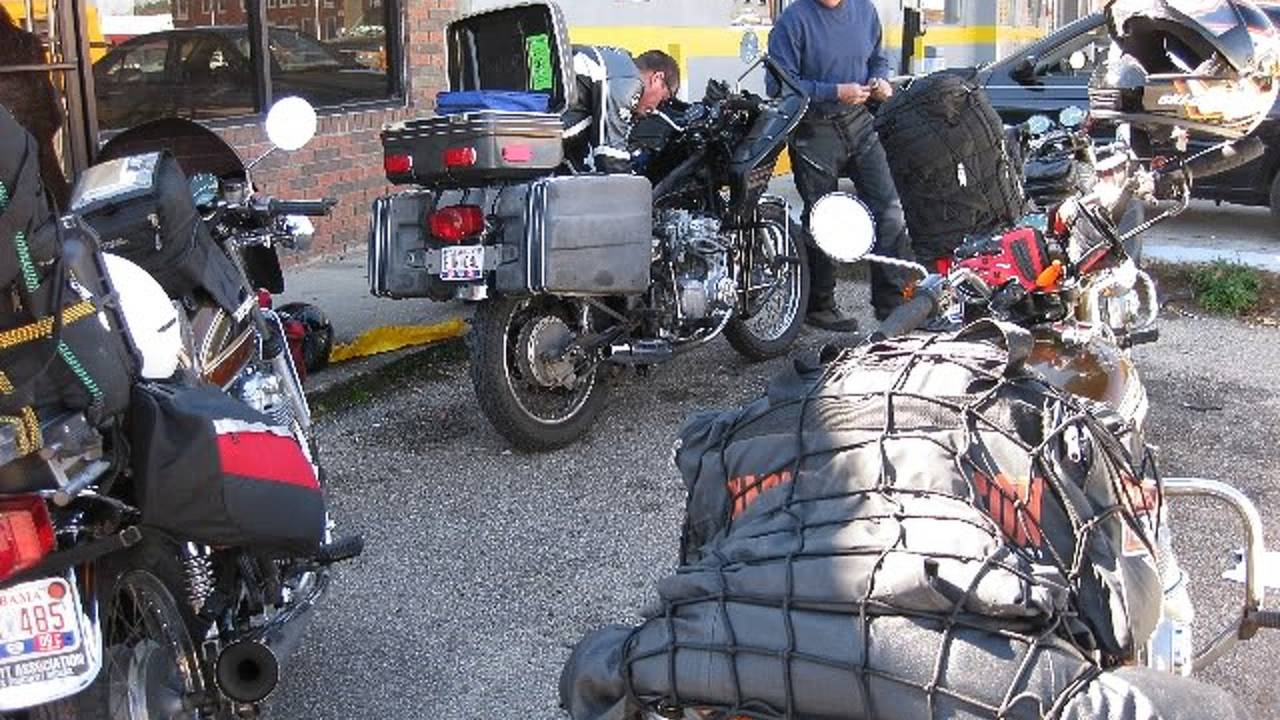 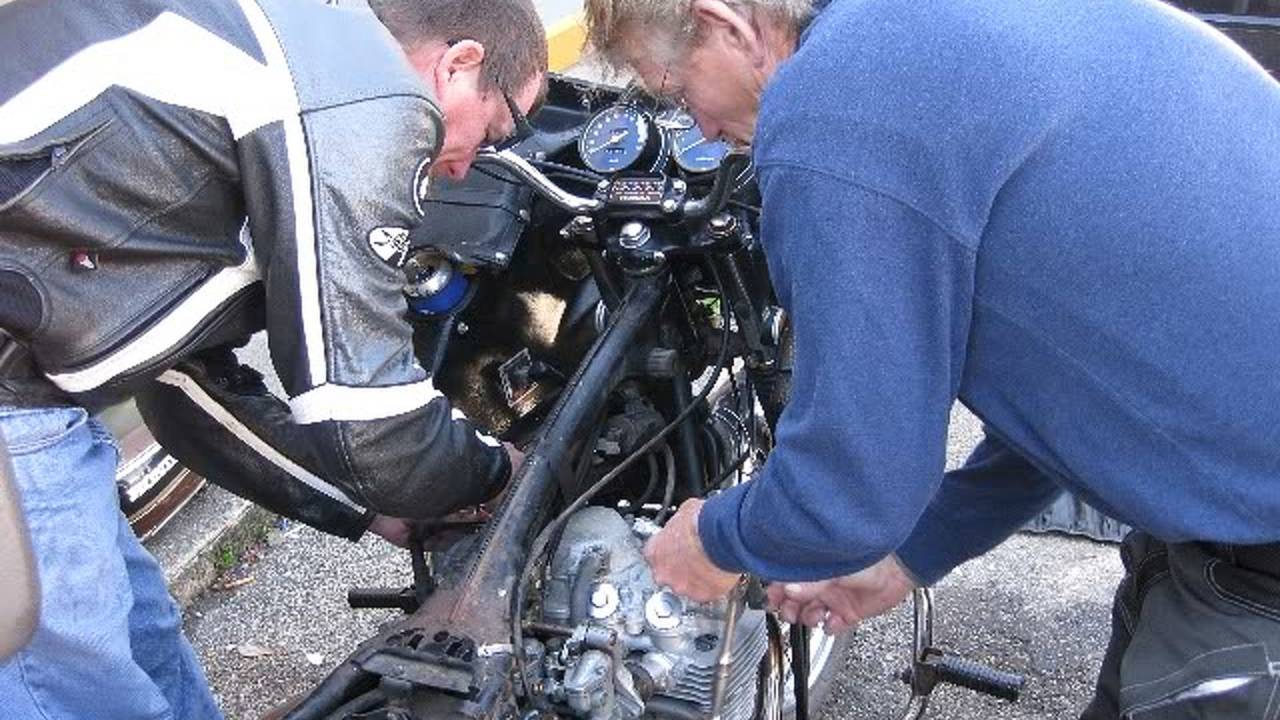 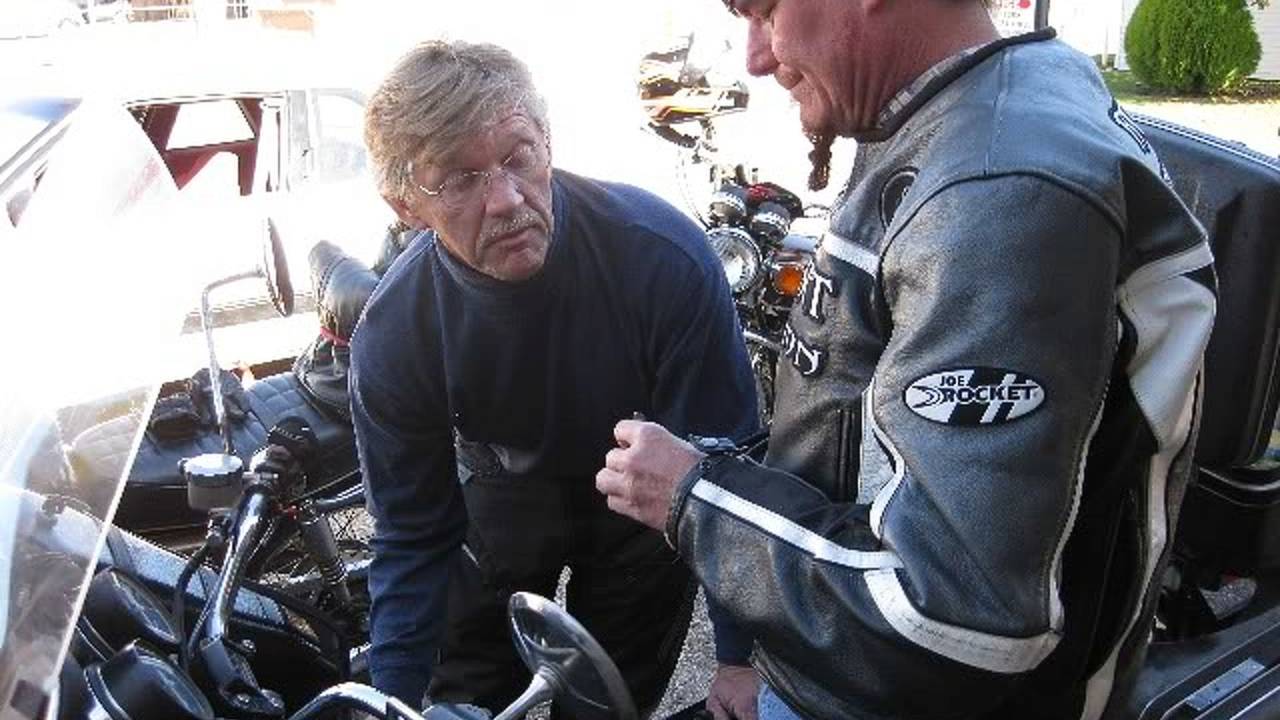 We really did become quite a team. Here we are, Steve, in the Joe Rocket jacket, doing the first two plugs and I, in the blue shirt, doing 3 & 4. Fun stuff.

Now before we get into lunch, I need to give credit where it's due. Mark took 99% of the pictures, so consequently, he often won't be seen. He's the guy riding Cafe Ole'. Without Mark we wouldn't have any pictures, and many of these are truly note worthy (rather than my pictures which simply suck out loud).

Intent of the ride was to stay off four-lane roads, eat no chain food, and sleep in only shit box hotels. In simpler words, we wanted to avoid chain merchants of any kind and support our Mom and Pop economy. We knew it wasn't a realisitic goal, but it had enough merit to make it worthy of an attempt. Hell, if we had a choice, we stopped in locally owned gas stations.

Okay that was the intent. We broke it within four hours of leaving, but that was okay because we were "trying."

Originally published on ADVrider.com. Shared with permission from the author.