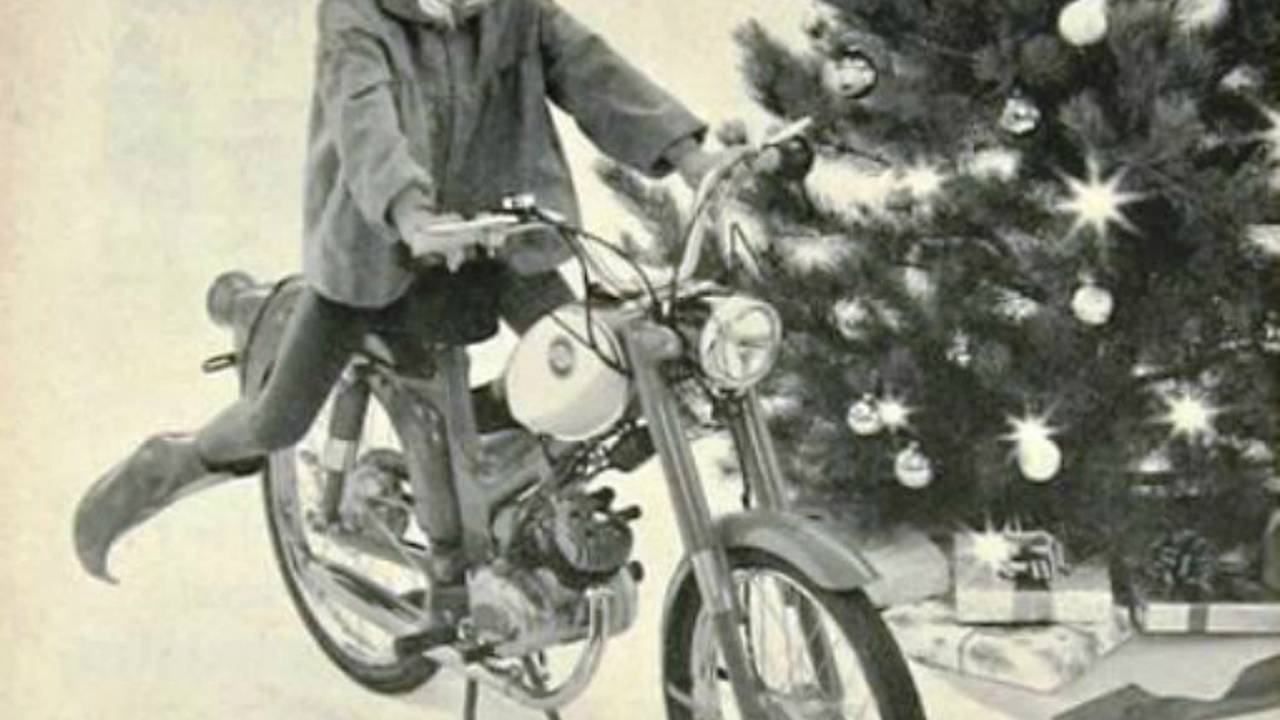 Sleighs? So last-several millennia. Santa needs a bike. A bike with a motor.

All of us here at RideApart already listed a lot of ideas of what to buy us (I mean, your motorcycle riding friends and family) for the holidays, and we've already done all of our shopping.

But over eggnogs at the company Christmas party, we got to wondering what kind of bikes the boss Kringle would ride. So now, a little hung over, I took to eBay to see if I could find an answer, using just what I know about Santa from Christmas specials and carols.

This Gold Wing trike conversion is actually pretty perfect for the jolly old elf. I mean, we know he is fat (read: jolly) and getting on in years, plus he needs lots of room for cargo. This is even in the official color scheme of Santa Claus, red and white (or light silver, it's hard to tell).

We all know Santa lives at the North Pole with no motorcycle dealers around for hundreds of miles. The simple air cooled nature of this 2004 Harley Sportster 1200 means his magical toy-making elves could probably keep it in decent running condition. It has a low seat height for short legs, and a laid back riding position with room for his little round belly. This particular one is in some of Santa's favorite colors too. I image this more as a off-season recreational bike though, since there is little room for toys.

Along similar line to the Sportster is this 1972 Triumph Bonneville cafe racer. Again, it's a nice recreational ride that is sporty, but not too hard on the old guy's back. It comes in the traditional colors to match his red and white suit, and is easily understood by the elves in the service department. Best of all, it's an authentic Bonneville as Santa wouldn't be caught dead on a new bike trying to look old—it would ruin his image.

This Ural, with its sidecar and driven 3rd wheel, is the perfect bike for dashing through the snow. Plenty of cargo space for presents, agricultural engine for the elves to work on, and surefooted in the snow like a reindeer. Plus it's from Germany or Russia (take your pick), but at least a cold northern area similar to the North Pole. And despite the name, this isn't retro—its just a new old bike.

Speaking of the great white North, the ideal motorcycle make for someone from the arctic circle would obviously be a Husqvarna. I can easily imagine St. Nick roasting around the North Pole on this McQueen Era Husky WR250 dual sport bike in his favorite colors.

With how naughty the Germans have been throughout the 20th century, I imagine they started sending Santa free bikes just after WWII, and kept at it at least until the wall came down in the 1990s. I bet if you open up a barn at Santa's workshop, you'd find lots of bikes like...

, which has a custom Santa spec red and white pinstriped tank, with fenders to match his leather boots and belt...

, which I like to think of as Rudolf the red nosed beemer.

This pre-war Harley 74 is typically the type of bike you see Santa depicted on in Christmas cards and the like, and why not? The guy has been around forever, so he probably bought it new. If you wanted to deliver the goods back in the 1930s, the torquey power band, luggage rack and fat tires made it easy to ride long distances and carry cargo. The simple flat head engine and iron construction means the elves can make parts from scratch if need be.

Of course, we have photographic proof from the 1960s: It was in all the magazines that Santa is one of the nicest people and rides a Honda.

So I suppose he would still have one to get around his massive campus in the North Pole, most likely with semi-knobby tires for the snow. He also appears to have gone through a mid-life crisis in the 1960s, or maybe it was just the zeitgeist of free love and experimentation, because this is certainly not Mrs. Claus on the back of his Dream.

If you want your own 150cc Honda in Santa red and white, here's a really nice one. I doubt you'll be able to score with your own Ms. Hathaway though, not without a futuristic bike mounted phone like Santa had.

Here are seven of my suggestions in no specific order. What do you imagine Santa riding instead of the traditional sleigh, or in the off-season for recreation?