Why Wearing Jeans On A Motorcycle Is A Really Bad Idea 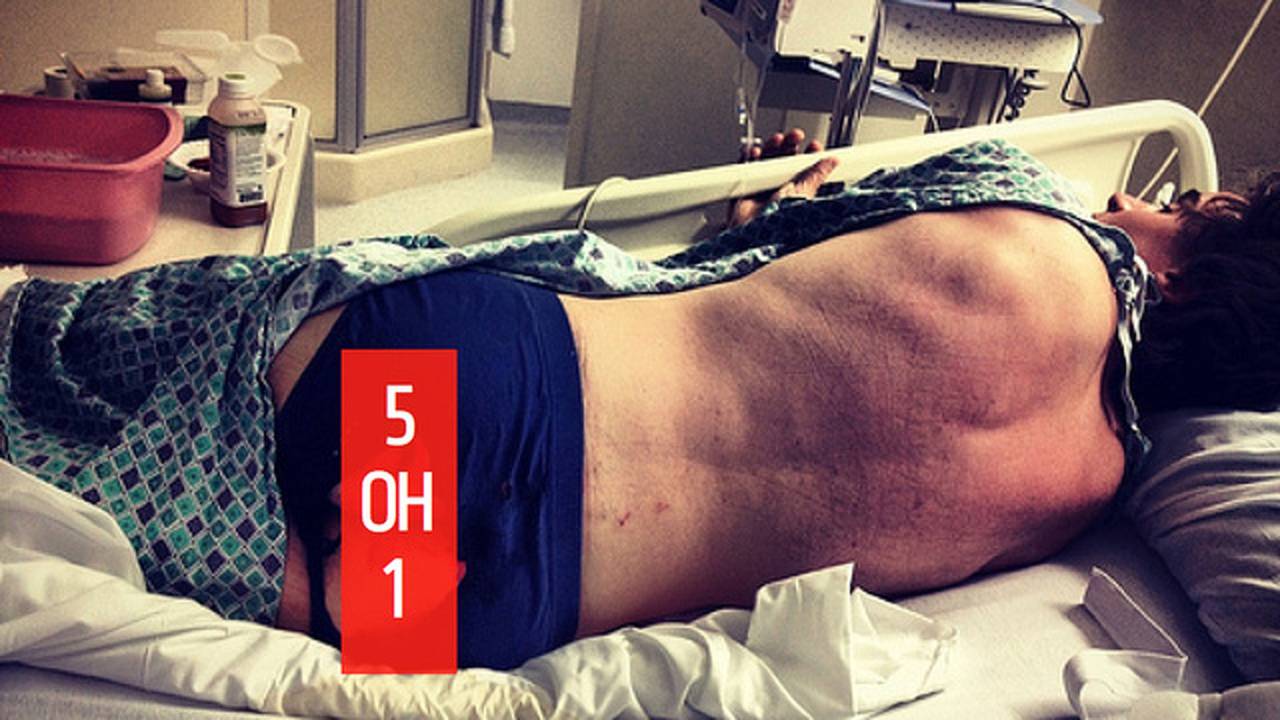 Wes Siler crash photos and story behind his RSV4 motorcycle crash while wearing jeans and the injuries that resulted.

Why Wearing Jeans on a Motorcycle is a Really Bad Idea

In the ranks of embarrassing pictures you could have posted on the Internet of yourself, I’m going to guess this one is close to the top. Yeah, that’s my butt, clearly visible through my shredded Y-fronts, rubbed raw and bleeding from sliding down the road. Those undies provided about as much protection as the Levis 511s I was wearing, which is to say none. This happened at around 35 to 40 mph.

Now this photo, this is of my left knee, which enjoyed a similar amount of protection: none. Cat’s Eye? Foot peg? Wombat? I’m not really sure what poked the hole, but it’s about an inch deep.

Really, it was no big deal. Riding home from dinner around 11 pm, I had a green light to turn left on a city street, so I turned left. I wasn’t practicing for an MSF course, but I wasn’t riding fast either. Just normal guy-riding-a-bike stuff.

Just as I apexed the 90-degree corner, the bike started leaning over really far, then it was sliding away from me on its side. What the hell? Once I’d stopped sliding, I ran over, picked the bike up, put it on the curb, then went back to see what had caused the low-side. Turns out there was a patch of car safety glass, the kind that turns itself into little marbles when it shatters, all over the middle of the corner. I hadn’t seen it in the dark and it was literally like hitting marbles. No warning, just slip.

At that point, I realized my jeans were torn to shreds, my leg and butt were hurting like hell and, man not again, my left arm was broken.

I needed to go to the hospital, but I needed to get the RSV4 someplace safe first. It’d be gone in 30 minutes if I left it unattended on a curb in Hollywood. So, instead of calling an ambulance, I pushed it two blocks to my old house.

Once I’d stopped in the driveway and gotten my old roommates to unlock the gate, push the bike around back and lock it up, I laid down on the couch while they fed me shots of vodka. A quick once over revealed that my knee was bleeding pretty badly, as was my butt. The arm was still broken and there was a growing sense of hollowness in my left chest. Adrenaline wearing off, this was all beginning to hurt.

Mark offered to drive me to Cedars Sinai hospital, but not before grabbing a towel so I wouldn’t get butt blood all over his seats. I got the peculiar experience of strolling into the ER and checking myself in with my butt hanging out of the hole in my jeans.

Five hours later I got a bed and a couple hours after that I got painkillers and then everything was alright.

After much head scratching from doctors, cat scans and X-rays, it turned out there was no actual damage to the bones or ligaments in my knee. Giant sigh of relief, I’m paranoid about injuring my knees.

But, my tailbone was bruised (along with the rest of my butt and thighs), there was the road rash, two fractured ribs and that stupid broken arm.

I’d suspected for a while that the metal I had in my arm from a crash back in 2008 was making the whole thing weaker, not stronger. There was no medical evidence to support it, but I know what breaking a limb feels like and I know what kind of force is required, so it’s been my theory that the metal was to blame when I broke my wrist (exactly at the end of the plate) last summer. That crash just wasn’t big enough to break a healthy bone.

Now, the Cedars ortho team was agreeing. I don’t have the X-rays to share yet, but this plate basically popped its screws and pulled pieces of the Ulna with it. One of the doctors showed me a vertical view and it looked barely broken. Then he showed me a side-on view, and it was gnarly. We both jumped in terror when it came on screen.

So, we agreed to take the opportunity to take the old metal (seen here) out and replace it with something much more comprehensive. I now have a plate covering the entire length of my forearm, coincidentally installed by the same surgeon that worked on Adey’s leg, Charles Moon.

That work is so substantial that now, a little over a week later, I write this with two hands, wearing no cast. I’ve been given the go-ahead to start working the left arm out. Thank God for a surgeon that knows what he’s doing.

Added bonus: I get to sport these stitches out in the open. In combination with a pretty significant limp, I’ve got a solid Halloween costume ready.

Imagine being greeted by this sight. That’s my butt, incredibly swollen, bruised and raw. The girl that cleaned me up and changed my bandages every day for a week is an angel. I’ll fight anyone that suggests otherwise.

Now, that rash is mostly healed and the hole in my leg is mostly filled in. My ribs are mostly healed (so long as I can keep from coughing) and I’m using my left arm mostly like normal. That’s in 10 days. It pays to be in shape and eat healthy.

That first week was tough though. It hurt to sit, it hurt to lie down, it hurt to stand and it hurt to walk. With the ribs, any movement, and I do mean any, was absolute torture.

The Percocet was making me act like a jerk to the people I love, so I stopped taking it after three days and just dealt with the pain. Painkillers have a way of really destroying your mind, it’s crazy how freely our healthcare system hands them out. I replaced mine with some strong Indica. Same effect, no craziness. Yay, California.

Now, it’s all just a mild ache. I’m trying to get as much easy exercise as I can, am eating super healthy and as much as possible and my body is telling me to sleep about 10-12 hours a day. I probably have about 80 percent movement in my left arm and about 60 percent strength, both of which are getting better every day. This won’t be a long lasting injury and, hopefully, with new, better metal, I’ll actually be stronger when it’s all over.

I’ll break down how each item of gear performed in separate articles. Aside from those Levis, I was wearing all of it, including a separate, strap-on back protector.

If I’d been wearing proper motorcycle pants or my new Aerostich Roadcrafter, which I should have been, I’d have avoided most of the above. Will I in the future? Well, sometimes.

My safety gear philosophy has always been to wear as much and as best as possible when doing anything fast, dangerous or enthusiastic. That means full motocross gear (including a neck brace) off-road. Race leathers on sportsbikes and stuff like a two-piece or that Roadcrafter while touring. The big exception comes in town, where my admittedly vain self needs to balance style and safety.

Riding in the city involves a huge amount of risk. Drivers are crazy and there’s lots of them. The roads are shredded by high use, earthquakes and weather, but there’s no time and no money to close them for repair. There’s pedestrians, cops, crazy people and tourists. As my crash highlights, there’s debris all over the roads. But, riding in the city also saves you time, money and hassle. A couple weeks in bed every now and then is better than a a couple hours a day spent sitting in traffic. At least I think so.

I am choosing to use bikes as my primary mode of transportation. Am I compromising safety? Absolutely, but I do so aware of the risks, aware of the consequences and am prepared to accept and deal with them. This is just a part of the life I’ve chosen to lead; a life on a bike. I do something that’s risky, but that risk is part of the point. With proper gear, the risks are minimized.

Jeans are a bad idea, hopefully my experience helps you understand and appreciate that. Hopefully it helps you make an informed choice about what you wear. But there is a choice, and I’ll still be choosing jeans some of the time, though now they are often woven with Kevlar.