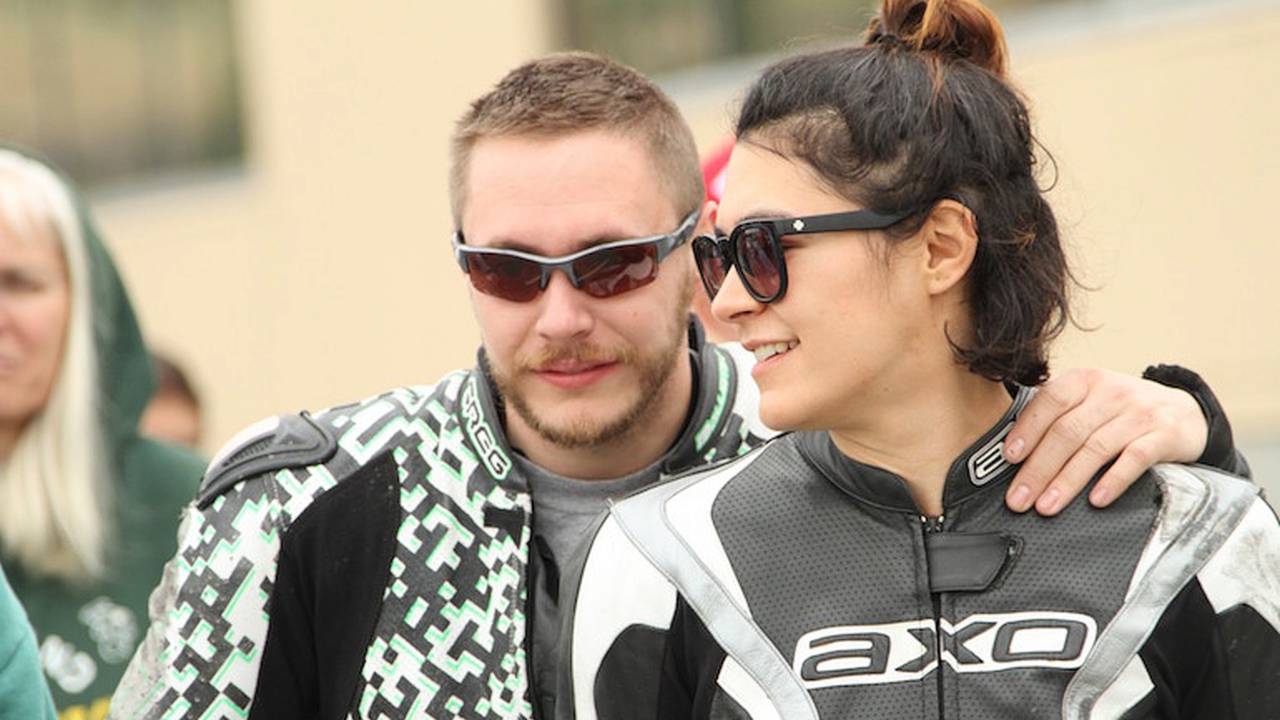 #SheRides - Women Influencing Two-Wheeled AdventuresThe thoughts and opinions of a woman who's always on the go...riding two wheels! For most of us...

For most of us riders there was someone who influenced us to get into riding. Whether it was a relative, friend, significant other, or even a popular (e.g., movie star or racer) figure, it was probably one badass dude…or dudette. The latter, to me, seems not all too common: I don’t frequently hear a lot of stories of women getting guys into riding — just one account so far.

But, I know it totally happens. Women are totally “bad” influencers, too! Even though I have yet to get a guy or girl into riding motos, I have influenced them to do incredibly fun moto-related activities.

My Influencer – My Friend TJ

I met TJ while working at BJ’s restaurant in Baton Rouge, LA. I met him in my early twenties, and when I found out who rode motorcycles, of course I thought it was cool. I always told him that I wanted to ride as a passenger, but for a long time it was just a bunch of talk coming from my end.

It took about two years before I had the guts to even get on a motorcycle. One day, I randomly texted TJ that I wanted to ride on the back of his bike, and of course he was game. I hopped on the back of his Triumph Daytona 675 and we took off for a few hours. When we returned, I knew I didn’t want to be a passenger again. Shortly after my first time on a moto, I obtained my M1 license.

My first time on the bike. It seems that I really liked it!

Fast forward five years, and I’m still friends with TJ. Things, however, have changed obviously. Right after I obtained both my M1 and a motorcycle, I set off to California. I stayed in touch with TJ, but as the years went on, I learned that his riding was becoming more and more nonexistent.

It finally came time for TJ to sell his Triumph Daytona –he sold it this past April, actually. I was bummed because he has never been to the track at all in the 10 years he’s been riding. The week after he sold his bike, I was planning to attend a mini track day at NOLA Motorsports park. (This entailed bikes no bigger than 250ccs going around a kart track.)

I texted him last minute, asking if he wanted to join me. I haven’t seen him in almost three years, so I was hoping we could not only meet up, but also meet up doing something two-wheeled related. He immediately said yes and he met me at the track. We rented Ninja 250s, found TJ some leathers, and off we went.

Of course, we had a blast that day. I also filled him in on all my moto adventures, informed him how fun it is to race a little bike, and reminisced about the days I couldn’t even get a bike out of first gear without stalling it.

The best part of this story is that not only did TJ love doing the mini track day, but he did another one a month later. He told me all about it and told me he wanted to buy a track bike with the intention of racing it — and he hasn’t even been on the big track, yet! TJ is so serious about this, that he recently bought a 2014 Ninja 300.

TJ loved the mini track so much, he went again before buying a Ninja 300 of his own.

Writing this down, I still can’t believe that he dove all in. Obviously, he didn’t need much persuading, but I didn’t think the mini track day was enough for him to get hooked. Either way, I’m glad I was able to pay it forward. If it weren’t for him, I may still be in Louisiana, moto-less…

READ MORE: #SheRides | What Women Racers Can Do for US Racing | RideApart

My Fiancé’s Influencer(s) – His Girlfriend

It was in the beautiful and wet Issaquah Washington is where my now fiancé Greg started riding. He met a girl, who at that time was interested in getting a motorcycle license. It didn’t take much convincing for him to hop on board, so he obtained his M1 and bought a brand new (at that time) 2009 Triumph Street Triple.

Well, not only did she not follow through on getting her license, but she also broke up with him. And as we all now, the best way to get over a break up is to get some two-wheeled therapy. So that’s what Greg did. He traveled to and from San Diego on the quirky Rumph, and soon after, moved to the Bay Area.

Lost a love, but gained a love. This one actually is still around, too!

Greg and I actually moved to the Bay Area around the same time, but didn’t meet one another a few months after. We met on a group ride and became great friends since then.

I became a corner worker for the American Federation of Motorcyclists (AFM) and was doing track days the second I moved to California. Both activities were fun, and as Greg and I became two peas in a pod, I invited him to come to a track day with me.

This photo was taken before Greg and I took off to his first track day ever on a motorcycle.

Greg is not stranger to the track. He actually started racing Porsche 944s when he was 16 years old. He knew about moto track days, but steered clear. He confessed to me that he purposefully avoided doing track days because he knew he had the potential to get addicted to them (and he did). It was a good thing I came along to help push him into the deep end then!

Next, I encouraged him to be a turn worker for the AFM. We worked on the sidelines together for almost an entire year before I decided I wanted to race. Greg wasn’t surprised when I told him he should join me on this journey. He immediately bought a race-ready Gixxer 600 and was ready to get the show on the road.

He ended up getting his racing license before I did (I failed my first try, but eventually got it the second time around). What I really like about him (and why we get along so well) is the fact that it didn’t take much to convince him to do fun, expensive things. It didn’t take long too long after to look at him than more than just a friend, so here we are!

Greg's first time on the grid (#956). Photo by Oxymoron Photography.

Every time someone asks him how he got into racing, he always says: “It’s her fault” and points at me. Oh, I also forgot to mention that I got him in dirt bike riding, too...

Greg and I at his first dirt day (and race!). I already had a dirt time under my belt prior to this. He figured he'd join in on the fun. Photo by Oxymoron Photography.

READ MORE: #SheRides — Pros and Cons of Being a Woman Rider | RideApart

Did a Woman Influence You to Ride?

As I mentioned earlier, I have yet to influence anyone to actually want to learn to ride, but I’m excited by what I’ve done so far. It’s such a great feeling to get the people I care about to be so passionate in what I love to do too.

Right now, I’d like to open the floor (comment section) to ya’ll. I’m genuinely curious to know if you were influenced by a woman to ride? Was it your Aunt Sue who always went against the grain and get you into it? Was it your girlfriend or a college crush? Was it your wife who told you couldn’t have a moto, but then surprised you with one for your birthday? I’d like to know!