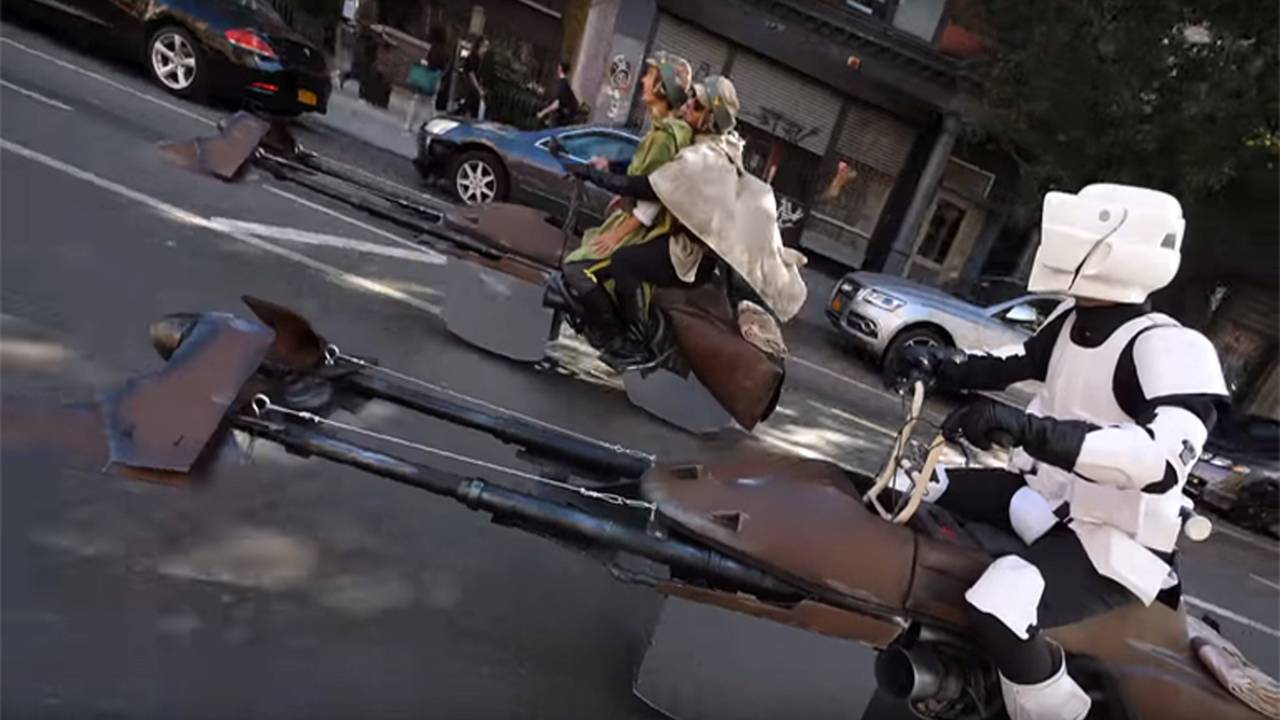 Hard work and a ton of inspiration turned a pair of electric bicycles into killer Star Wars speeder bikes just in time for Halloween.

According to the nerdlords at io9, a group of assorted engineers, designers, pranksters, and bike builders put together a pair of screen accurate Aratech 74-Z military speeder bikes like the ones used on Endor in Return of the Jedi. They then got all dressed up in costumes and sped through Manhattan to the delight of onlookers. Since at least some of them are big time YouTube stars, they filmed the whole thing for the internet to see.

Neat, huh? I bet you're wondering how they did it, though. I know I was when I first saw the video. The group started with a pair of stock Super 73 electric bikes from Lithium Cycles. They then built the speeder bike shells from a combination of plywood, cardboard, expanding foam, and bondo. Other details were made from PVC pipe, other plastic bits and bobs from the local hardware store's plumbing department, some NERF footballs, and other assorted odds and ends. The illusion was completed by hanging some plastic mirrors from the bottom of the shell to hide the bikes' wheels and make it look like it was actually gliding along on by repulsorlift.

The Super 73, which costs around $3,200, has a 1000 watt hub-mounted motor, a 35-mile range, and a top speed of 25 miles per hour. Not as fast or agile as a vehicle fitted with an Aratech repulsor coil perhaps, but these gussied up speeders tackled New York traffic pretty well despite all the extra costuming. The group even put together a behind the scenes video to brag about the project, and it's honestly really impressive.

I have a halfway good costume this year, but it doesn't even touch this. These guys did a hell of a job, and the only thing I hate about it is that I didn't come up with the idea. Have a happy Halloween, friends. Oh, and may The Force be with you.