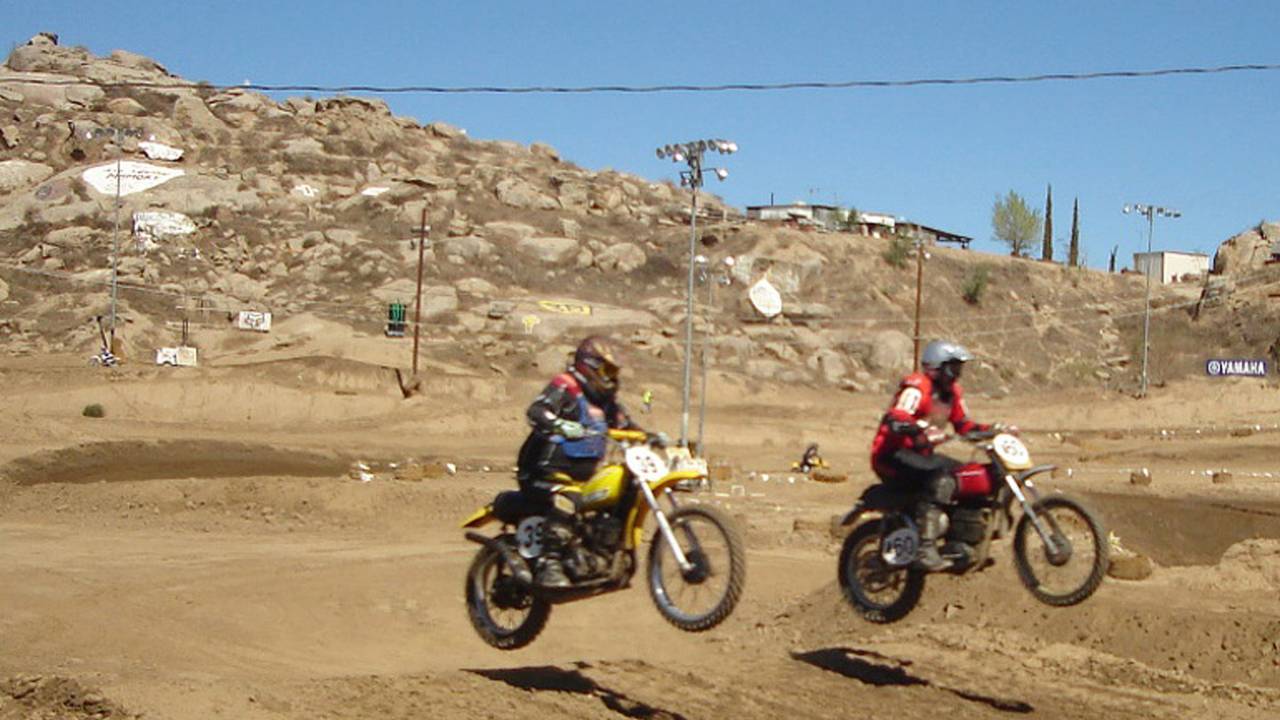 Race Vintage Motocross for $1000 - Yes, Including the BikeSay you've been riding your street bike and you're really hooked. You're itching to race...

Say you've been riding your street bike and you're really hooked. You're itching to race head to head, but as a poor, young noob with a clapped out Yamaha Seca II, road racing seems like the impossible dream. This is mainly because: 1) You need your bike to get to work or school, and 2) the safety gear alone to go road racing adds up to more than you have invested in the Seca.

What if I were to tell you, you could do some real head to head racing for less than $1000, including buying another bike? You would probably think I've been drinking or talking about some outlaw minibike race in a vacant lot (which totally happens). I've haven't and I'm not. I'm talking about racing amateur motocross.

As the gate drops, bike and gear reflect about $800 invested

I know many street guys who don’t ride off-road, and lots of dirt guys who think street riding is a good way to get killed. However, you'll benefit from the interdisciplinary action. A street rider, especially a noob, learns all sorts of bike control secrets for less than optimal traction riding on dirt, and when you do have the money to go road racing, all the race-craft will transfer right over to making passes on a road course.

The beauty of racing off road is that you're rarely riding faster than you would on the street, and dirt is more forgiving when you fall off. Also, with a good pair of boots,a helmet, and a chest protector, you can cobble together safety gear from your local sporting goods store (knee and elbow pads, mouth guard, baseball sliding shorts to literally cover your ass). Unlike road racing, you don’t need a leather suit and back protector, which can add up to as much as a beat up dirt bike.

Jumps may be the hardest aspect for street guys to wrap their head around, but think of them as corners in the third dimension and you will be fine. As you get better and faster (or get a better bike), you won’t slow down for them as much. Soon, you’ll be hitting jumps and timing them to land on the back side of the next one—instead of hitting each one.

Back in the dawn of RideApart, Jamie Robinson did a Hell on Wheels vintage motocross event on a Craigslist Yamaha - http://www.rideapart.com/articles/rideapart-11-hell-on-wheels-moto-rally . I have raced motocross events on a Honda CL450 scrambler, a yard sale Husqvarna 400, and a $350 Honda 125cc dual sport. No matter how lousy and slow the bike is, it will still be a ton of fun and very educational.

Dirt bikes tend to get cheap when they get ugly, but they are built pretty tough, so don't let the cosmetics scare you. A quick Craigslist search turned up a few good examples for less than $1000:

2006 150cc Chinese Honda Clone - If your club will let you race this with the 125cc, pit bike, or dual sport class, you can likely run this thing to death while doing no maintenance and having a blast. Don't buy a non-running Chinese clone though, as parts and manuals are impossible to find.

Unknown year Honda XR80 - If the club has a 100cc or minibike class to race in, this is a cheap option that will never break. It's going to be slow with a full sized human on it, but that just means you are less likely to get hurt. Any size old Honda XR or even XL would be a good start.

1986 Yamaha YZ250 - This is a real race bike you will probably never outgrow. It may be a bit fast for a beginner off road though.

Now you’ll have to find yourself a local club to race with. Most MX clubs have a class called "Bomber" or "Dinosaur" for less expensive, older bikes. Sometimes there is a pitbike class, a dual sport, or play bike class. A new and popular class is "2 x 4," which is any old 4 stroke bike of about 200cc. Find out what classes are available before you buy a bike. At times, something as simple as a front disc brake will bump you up to a much faster class.

Typically in motocross "vintage" refers to the style of track, and the same goes for "Vet." So don't think a vintage club will be racing priceless museum pieces. Vintage and Vet tracks have less vertical obstacles and a more natural terrain. These clubs exist for older riders to race, have fun, and head back to work on Monday without abusing old joints and cartilage. If you're in California, check out CALVMX for monthly races, and Hell on Wheels for occasional events.