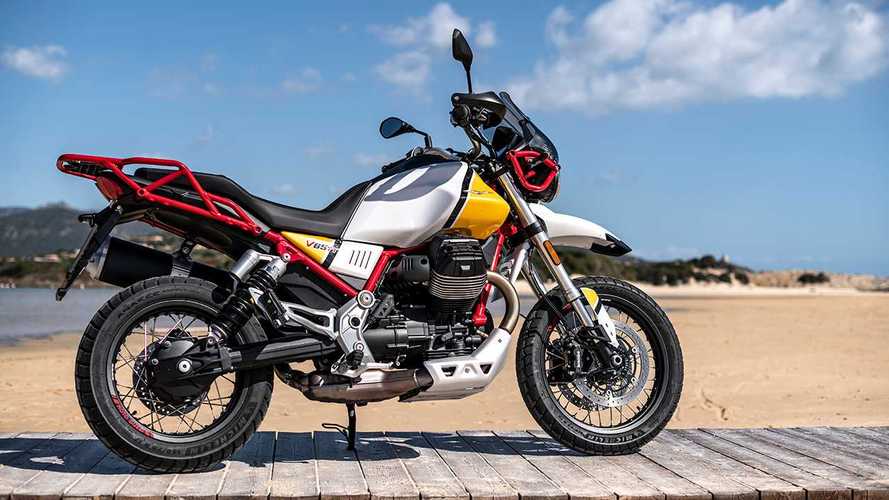 Buyers are trading in other-brand bikes in droves for the V85 TT.

The results are in, and Moto Guzzi’s V85 TT is selling much better than expected. Even more impressively, it’s converting riders to the Goose who weren’t completely sold on the brand’s charms before. It may only have been around for six months, but already the middleweight ADV-that-could is eating up the competition.

As the only middleweight ADV bike to offer the advantages of a shaft drive within the segment, that’s one very obvious selling point. However, it wouldn’t mean much if the engine was still the same clunky type that anyone who’s ridden a Moto Guzzi has come to associate with the brand. The adjective “agricultural” gets thrown around a lot with regard to Guzzi engines, and while it’s usually said with a kind and perhaps even wistful tone, it’s also not inaccurate.

The V85 TT’s new 853cc 90-degree transversely-mounted V-twin has, so far, been impressing most riders who previously only knew other Guzzi engines. Gone is that clunkiness that usually gets chalked up to the ol’ Guzzi charm, and instead there’s a smoothness that seemingly every reviewer can’t say enough good words about—including our own managing editor, Sabrina, who found it a very intriguing ride indeed.

So, What About Those Sales Numbers?

In even better news, apparently 70 percent of trade-ins on V85 TT purchases have been coming from non-Moto Guzzi owners, according to the LA Times. That’s an astonishing conversion rate, and something that Guzzi’s competitors would do well not to ignore.

Even more impressively, the LA Times also spoke to Ed Cook, operator of AF1 Racing in Austin, Texas. No matter where you live in the US, if you’re an Aprilia fan, chances are good that you’ve dealt with AF1 in some way before. They keep parts and consumables for Aprilia models flowing smoothly into the hands of DIY Aprilia enthusiasts here—which is sometimes no mean feat for older and especially discontinued models.

All of this is important to note because of something else Cook said in this interview. AF1 has only had the V85 TT in stock for about a month and a half, but already he’s sold eight of the sixteen he originally ordered.

“We had more pre-sales on this than any bike we’ve ever sold,” Cook told the LA Times.

Don’t worry if you’re ordering one of these in the near future from AF1; Cook says he’s already placed another order for 12 more with Moto Guzzi.

The pricing certainly can’t hurt. At $11,990 for the regular V85 TT and $12,990 for the spanglier V85 TT Adventure, they’re quite reasonably priced to compete with KTM, BMW, Triumph, and Ducati. Maybe the daunting prospect of Euro 4 compliance chasing the Stelvio off into the sunset actually did Moto Guzzi a favor, if that’s all it took to set them on this exciting new path.