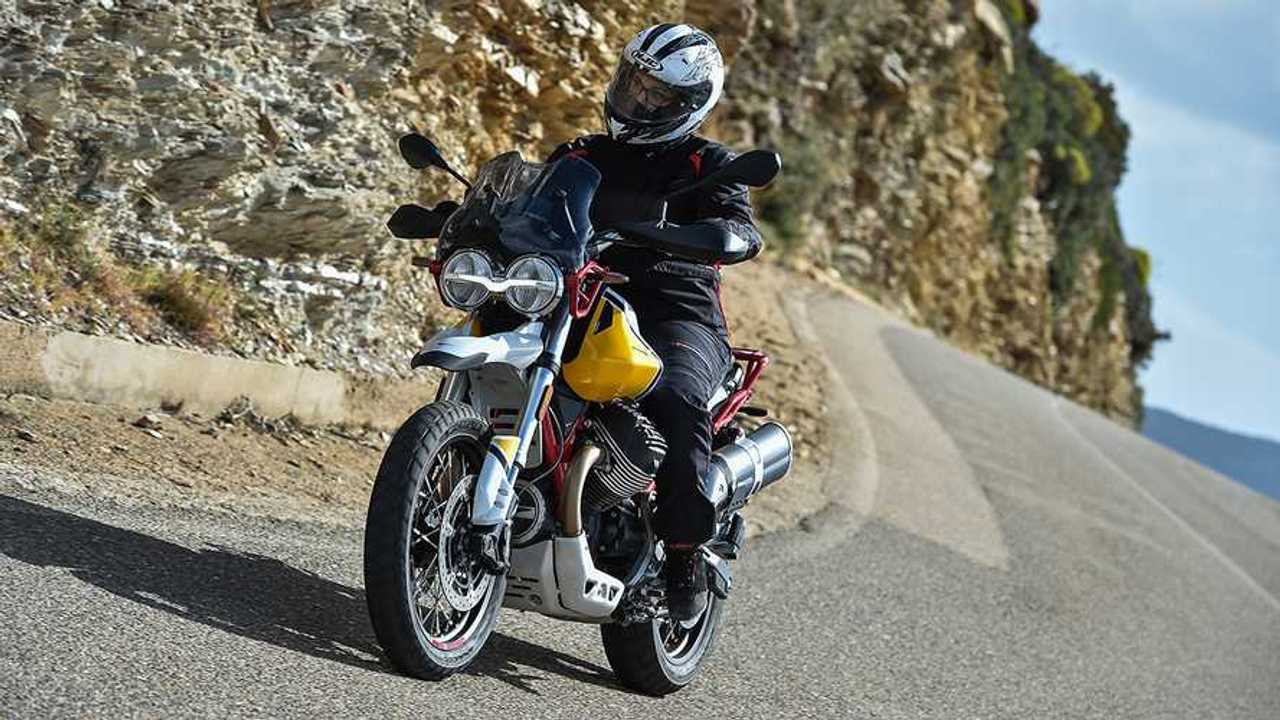 “Hey, how would you like to come and try one of the most-awaited bikes of the year in Sardinia?”

That's how a normal conversation like this goes, right? Good catch on the sarcasm. When it officially introduced the new 2020 V85 TT, Moto Guzzi knew exactly what it was doing: giving ADV fanboys (and girls) like myself a new centerfold to fantasize over.

THE GOOSE IS FLYING

I use the term “adventure” to describe the wet dream that is the V85, but if we’re going to be technical, Guzzi’s new Tutto Terreno really is what it refers to as a “classic enduro”. Don’t worry if that doesn't ring a bell; the company created the category specifically for its new model. According to Moto Guzzi, a classic enduro fits right in-between Crossovers and Easy Enduros on the lower end of the spectrum and Scramblers and Adventure bikes at the very top. What this means is that Mandello del Lario's latest family member aims to provide more balance between on-road comfort and off-road capability. Did it succeed? Let’s talk about that!

Sardinia is an island of contrasts. Located at the very center of the Mediterranean sea, it's the largest island in the basin and a paradise of beaches and mountains for Italian vacationers. From the orange mountains covered in green lush that break down and dive into the blue and turquoise of the sea, the southern area of Cagliari is a high dose of colors and sights straight to the face. Moto Guzzi didn't choose Sardinia (only) for its pretty face, however. No, gorgeous views aren't the island's only wealth: like veins, a rich network of mountain roads create sinuous paths connecting the north and the south of the island. Add to that miles and miles of off-roaders' sandbox and you have a riding paradise. That's what we were in Sardinia for: put the V85 through its paces on and off the road.

I’ll say it right off the bat: I love the V85. I tried very hard to find something inherently wrong with it—I felt the need to make sure that my “wanting to like it really bad” didn’t interfere with my objective judgment. The good news is that while I did find some flaws which I’ll discuss further down, there was nothing that really stood out as a dealbreaker—not in my book.

To come up with the modern-retro aesthetic of the V85, Moto Guzzi turned to its enduro and desert raid legacy. It drew inspiration from notable 80s-90s models such as the Quota 1000 and the V65TT Baja, as well as a few styling cues from the model the V85 “replaces”, the Stelvio. From the high-set front mudguard and deep knee groves of the V65 to the unique saddle profile of the Stelvio and dual headlights of the Quota 1000—the V85 is unmistakably part of the Guzzi family.

The two dozen bikes that would take us on our insular adventure were lined up in front of the hotel. While the entry-level V85 TT offered in Grigio Atacama (grey) with a black trellis frame is quite the looker, I called dibs on a "Giallo Sahara" V85 TT Adventure. What can I say, I’m a sucker for a contrasting red frame. These two color schemes, alongside the Rosso Kalahari (red and white) also available on the Adventure, will be the three available colors in America. The global market will get five—but that's ok, we're getting the prettiest ones if you ask me.

Looks are important, but what about the comfort and the ergonomics? Turns out the V85 fits my five-foot eight-inch frame perfectly. In fact, Guzzi is targetting a wider demographics in the hopes of making its adventure bike—hum, classic enduro—more accessible. The company claims that the size and geometry of the V85 will suit riders ranging from five-feet four-inches to six-feet two-inches in height.

The geometry has you sitting upright with your hands reaching a little wider than shoulder width and your feet aligned with the rest of the body. The reach for the handlebar is comfortable; you don’t have to lean in or sacrifice motion in the arms to get a hold of the grips. The foot pegs are low enough on the frame that standing up doesn’t mean having to dramatically bend down to maneuver the bike through the obstacles while sitting down doesn’t create a dramatic and tiresome bend in the knees. Combined with the triangular seat—narrower near the tank and slightly wider towards the pillion—it seems like I may have a new record of longevity in the saddle.

The TT doesn't qualify as a lightweight at 505 lb wet (which, by the by, is still a few dozen pounds lighter than some of its competitors). That being said, once I got going, the bike felt surprisingly nimble. I’m by no means a highly technical rider, yet almost instinctively the bike knew what to do in the curves and I had no difficulty rocking it in back and forth on the winding Sardinian roads.

The star of the show is obviously Moto Guzzi’s shiny new 853cc, 90-degree transversal v-twin mill. Rated at 80 horsepower and 60 lb-ft of torque, it proudly pokes out of each sides of the motorcycle, thumbing its nose at more conventional engine setups. I’ve heard of former Guzzis lacking a bit of refinement in their power delivery and while the V85 is meant to be a straightforward and simple bike, refinement isn’t entirely off the table. The manufacturer used premium, lightweight components including titanium intake valves and aluminum push rods to help maximize the engine's mid-range performance and reduce the weight.

The engine has a lovely throaty note from the onset. Then I twisted the throttle and that’s how I knew my crush on the V85 was justified. The power delivery is smooth and can be as gradual or as spirited as you desire. It lacks no torque, even when you need to pickup the pace to pass a slower car on a narrow mountain road—acceleration is not an issue, it’s right there when you need it, whatever gear you are in.

Speaking of gears, the V85 is equipped with a six-speed transmission that’s easy to operate—even getting off the neutral on idle is easier than on other bikes I’ve been on. I didn’t need to rock the bike to engage the first. The gears are long—like, reaching speeds of 60 mph in fifth gear with power to spare long. I found that feature particularly useful in the dirt—I easily got going without having to change gears within the first few feet and kept the bike in first for the entire (admittedly short) off-road portion of the ride.

Power is sent to the rear wheel using a shaft drive rather than a chain, making the V85 the only bike in the mid-range enduro segment to use this type of maintenance-free setup. The bike is jacked on 170-mm travel suspension with an inverted fork at the front and an adjustable Öhlins shock at the back. Clearance reaches 8.2 inches which is a respectable number for an adventure-non-adventure bike.

Braking power is provided by two 320 mm radial discs with four-piston Brembo calipers at the front and a single floating disc with a two-piston caliper at the back. While front grip was efficient and responsive, I found the rear brake lacked a bit of grip—not that you want the rear brake to be too aggressive, but it could use a tad bit more bite. It was most noticeable going downhill, having to slow down before a bend. The brake pedal felt a little mushy under my foot and it felt like I had to really punch it to get the desired response.

The three riding modes (Strada, Off-Road, and Pioggia—or Road, Off-Road, and Rain) change the engine’s mapping and adapt it to the road conditions and surfaces. For example, in Off-Road mode, there is more engine braking and the ABS is turned off at the back wheel. Using the menu, the rider can also opt to turn it off completely—but that’s an option available only in Off-Road mode. In Rain mode, the computer increases traction control while keeping the throttle input modest while the Road setting cranks things up a notch by increasing the throttle response and adjusting the traction control to a less invasive level.

Now, the flaws, because there is no such thing as perfection (perfection’s boring anyway). I found two: the first one is the engine block positioning. As delightful as the engine sounds and feels to me, without any crash bar or protector to take the hit in case of a fall, if I planned to take the V85 off-road, I’d be a little worried about taking a tumble a damaging the engine. We’re not in BMW-Boxer territory here obviously, but if the foot peg folds back, that beautiful Moto Guzzi-branded cylinder head takes the brunt of the fall.

The other flaw I found is the controls' ergonomics. The 2020 V85 TT introduces a fancy new TFT color display to the Guzzi lineup, complete with Bluetooth capability, voice-activated commands, call management, and navigation (when paired with a smartphone). The selectors for the riding modes and the menu are located on the righthand grip cluster. This means that should you decide to change the riding mode while on the go, the same hand that has to hold the throttle also has to navigate the modes. That's a little too much multitasking, it might be easier to stop to do the setup.

Are those bad-enough flaws that should make you drop the all-new Moto Guzzi V85 TT from your “want” list? I'll let you make your own call, but it sure still ranks high on mine! With a starting price of $11,990 for the entry-level model, it has a lot to offer. Here’s hoping Moto Guzzi stays on this path because, in my humble opinion, this V85 is beginning of something neat.