The Moto Guzzi love is real, not just sponsored.

There is now officially no degree of separation between Ewan McGregor and RideApart’s managing editor, Sabrina Giacomini. They both openly adore the Moto Guzzi V85TT. Only small difference is that he’s the newly minted brand ambassador and central character in Moto Guzzi’s campaign for the shiny new enduro.

We All Have Our Favorites: 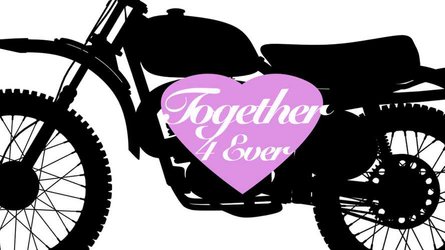 Ask RideApart: What Bike Would You Ride On Forever And Ever? 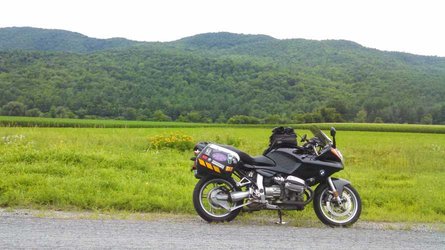 The best and most believable testimonials come from those who loved the product before they were so famous that any manufacturer would be chuffed to throw free bikes their way. Turns out McGregor has a long history of loving this brand, having first made his preference clear when he visited Moto Guzzi HQ in the midst of his epic motorcycle road trip “Long Way Down.”

The trip to the famous factory in Mandello del Lario, nestled along the gorgeous shores of Italy’s Lake Como (fellow Hollywood hunk and motorbike rider George Clooney’s favorite holiday spot), was the start of a beautiful partnership. McGregor was invited to the 2007 edition of GMG - Giornate Mondiali Moto Guzzi (Moto Guzzi World Days), and later was involved in the 2013 launch of the new California 1400 in West Australia.

As part of the V85TT launch, McGregor traveled around the rugged, breath-taking landscape of Southern Sicily, beginning and ending his journey at the Is Molas Resort and golf course. McGregor, who only agreed to promote the new model after testing it first, is captured riding the adventure bike over all sorts of terrain effortlessly. And that’s the thing: the bike isn’t just pretty, it has substance too—kind like McGregor himself actually.

Celebrity endorsement is great, but legitimate fandom is even better. Both? Alchemy. McGregor isn’t just riding the bike because he’s being paid, he loves it, and the brand, and though it’s likely that many among his throngs of admirers are paying more attention to Moto Guzzi than if he were not involved, the bike speaks for itself.

McGregor and the V85TT look good together.

Sales of the V85TT have surpassed expectations, especially in Italy, Germany, France and the UK, and there is no sign that they will slow down. Why would it? The V85TT has style, substance and some solid credibility. just like McGregor.

EWAN MCGREGOR, AUTHENTIC MOTO GUZZI FAN, IS BACK IN THE SADDLE OF A BIKE FROM MANDELLO

THE HOLLYWOOD STAR IS THE AMBASSADOR FOR THE V85TT, THE MOTO GUZZI ALL-TERRAIN

TAKEN IN IS MOLAS, IN THE BEAUTIFUL SETTING OF SOUTHERN SARDINIA, SHOTS OF THE NEW ADVERTISING CAMPAIGN

Mandello del Lario, 29 May 2019 - Ewan McGregor is back in the saddle of a Moto Guzzi, his age-old and authentic passion. The opportunity stems from the launch of the global advertising campaign for the new Moto Guzzi V85TT, the all-terrain that bears the Italian brand in the large enduro touring segment.

This is not the first time the Hollywood star, one with a vast fan base, has matched his image and reputation as a truly passionate biker with Moto Guzzi. In fact, the first episode of this happy partnership dates back to 2013 when – in West Australia – Ewan was the protagonist at the launch of the new California 1400.

The relationship between Moto Guzzi and the Scottish actor is genuine and sprung naturally from McGregor's love for motorcycles and in particular, those built in Mandello del Lario. Star of more than fifty films, including blockbusters the likes of Trainspotting, Star Wars, Moulin Rouge, Angels and Demons, The Impossible, T2 Trainspotting, McGregor had already talked about his passion for Moto Guzzi in road movie “Long Way Down”, when he made a stop in Mandello del Lario to visit the Moto Guzzi headquarters for the first time. A few months later, he reappeared on the banks of the Lario for the 2007 edition of GMG - Giornate Mondiali Moto Guzzi (Moto Guzzi World Days), returning to London astride his white California Vintage.

Today, the relationship continues with a collaboration which is unique in its kind, with Ewan McGregor the protagonist of the new launch campaign for the Moto Guzzi V85TT, a bike that, as a true biker, Ewan – as is always the case – wanted to ride personally on the road before agreeing to take on the role of testimonial for it.

Making the production of the campaign even more charming was the location from which the actor's voyage began astride his V85TT, the exclusive Resort Is Molas project, located in the splendid setting of Southern Sardinia. A true hermitage of uncontaminated natural beauty, this part of Sardinia has some wonderful views of the sea and the landscape of beautiful golf greens, a unique environment that welcomed and pampered Ewan McGregor and his Moto Guzzi on the departure and return from routes on paved and dirt roads in this little corner of paradise.

The photos of McGregor and his Moto Guzzi V85TT were taken by Paolo Zambaldi for The Ad Store Italia agency which, directed by Natalia Borri, produced the campaign under the artistic direction of Luca Eremo.

Two months after its arrival on the market, V85TT is confirming just how intensely awaited it was by riders everywhere: more than 10 thousand test rides were booked before the bike was even available, and the requests keep rolling in on the Moto Guzzi website. All the European countries are involved in the test rides and in terms of sales, the Italian, German, French and UK markets stand out with a demand far beyond the highest expectations.

Moto Guzzi V85 TT is the classic enduro dedicated to travel and tourism that provides ultra modern performance and technologies in a style rich in Moto Guzzi values and tradition.

V85 TT is built on a new technical platform and powered by a brand new 80 HP / 80 Nm engine, a 90° V-twin that is unique in the world for its construction layout and riding sensations. Comfortable, easy to ride, intuitive and featuring state-of-the-art chassis architecture, the new V85TT is a great traveller that adapts to everyone, gratifying both in everyday riding and on great adventures. It boasts premium standard equipment and there is an extremely vast range of accessories to satisfy the rider for every use, from daily commutes to touring to off-roading. The V85TT comes standard with Multimap Ride by Wire throttle and traction control. Plus, the Moto Guzzi MIA application lets you connect your smartphone to the instruments, significantly expanding the functions.