Blurring the lines between race bike and daily rider.

Suzuki introduced the SV650 platform in 1999, and it quickly earned a reputation as the poor man’s Monster thanks to its trellis frame, V-twin powerplant, and medium-tier componentry. That affordability lent to the SV650’s versatility, however, with owners utilizing the naked bike as a race bike, daily rider, and everything in between.

In 2009, Suzuki replaced the SV with the SFV650 Gladius, but the ill-fated SV substitute only lasted nine years before the SV650 made a triumphant comeback in 2016. Despite the updated specs and streamlined tubular steel trellis, Finland-based Stoker Motorcycles preferred the big-boned 2000 model for its street tracker (STR) project.

Full-time industrial and automotive designer Antti Eloheimo runs Stoker out of a Helenski garage, and the moonlighting builder wanted a race-inspired SV for the daily commute. Borrowing from the world of flat track, Eloheimo delivered a custom build that remains comfortable on the urban streets.

First, he modified the Suzuki’s gas tank to sit lower in the chassis. The altered fuel cell not only centralized the mass but provided clearance for the new flat track bodywork. Eloheimo hand-shaped the fiberglass bodywork from tank to tail, with subtle details like integrated air intakes and rear wind channels refining the package. A race-worthy foam pad seat completes the SV650’s cosmetic makeover, but Eloheimo stands by the decision.

“I wanted to build something easy and fun, that doesn’t hurt your body after a few kilometers,” admitted Eloheimo. “The saddle looks hard but is actually quite comfortable to sit on—or it might be that I have got used to road racing foam seats!”

Under the updated bodywork, aluminum side panels and an under-tail plate blocks the engine’s rear cylinder, rebuilt subframe, and electronics from view. A belly pan also simplified the STR’s form but keeps debris off the front cylinder in the process. Stoker then beefed up the SV650’s appearance and protection with a 3D-printed radiator grill and side covers.

Eloheimo painted the project with a two-tone white/silver color scheme that visually ties the bodywork to the signature trellis frame. Yes, the Suzuki SV650 may be long in the tooth at this point, but that doesn’t mean that it can still make one mean custom street tracker.

An Oldie But A Goodie: 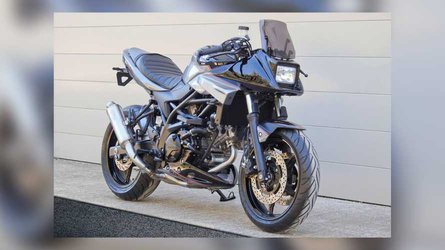 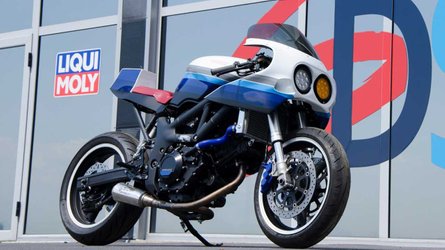