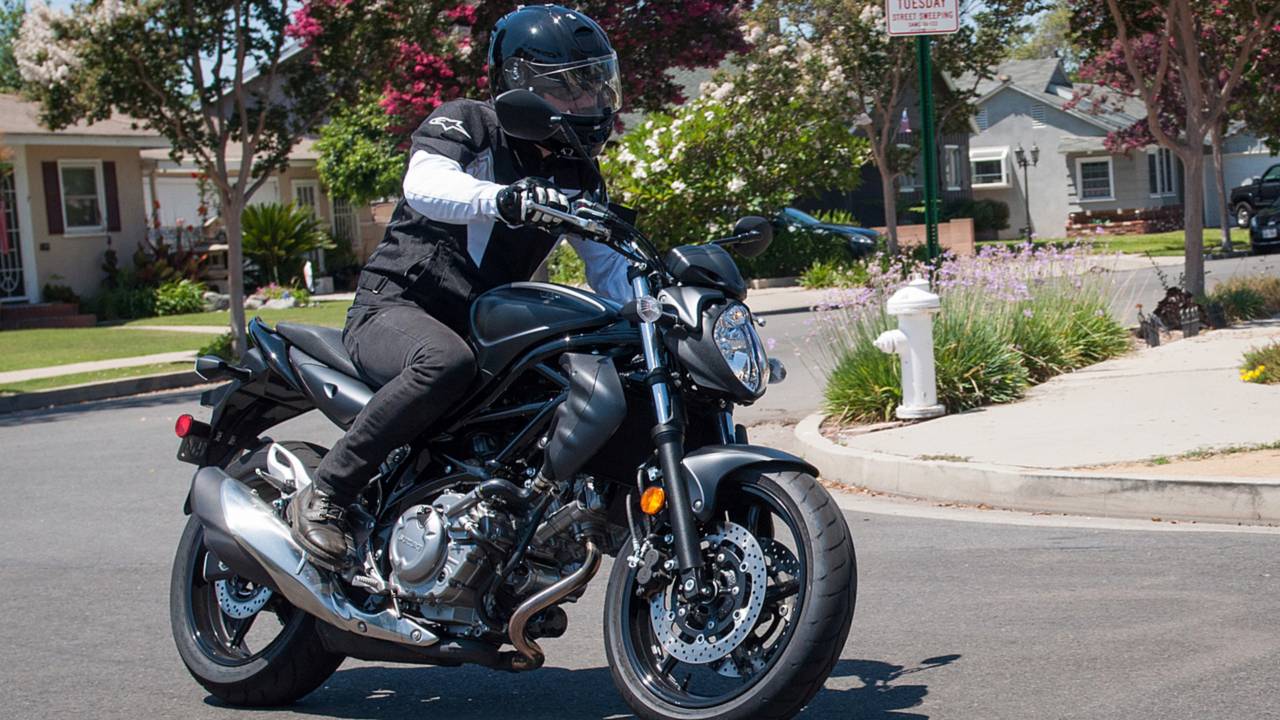 Remember the Gladius? It had the unfortunate distinction of launching just before the bottom fell out of the economy — and the bike market — back in 2008. Now it’s back, simply known as the Suzuki SFV650.

Not a lot has changed on this bike apart from dropping the Gladius title, bringing the SFV650 in line with the Suzuki’s new policy of giving its motorcycles numbers and not names.

The original SV650 that launched in 1999 was a bike that was specifically aimed at novice riders but, because of its agile handling and overall fun factor, it actually found a much broader appeal with more experienced riders.

Fast forward four years and, due to cost savings, Suzuki adopted the SV1000’s frame for the SV650. This meant the low seat was gone, which was one of the critical appeal factors for a novice on the SV650. And it wasn’t until 2009 when the SV650 was replaced by the SFV650 that its new rider appeal returned thanks the return of the low seat.

For 2013, Suzuki has continued using its popular liquid-cooled, fuel injected 645cc, 90-degree v-twin. But it now has a crankshaft with lower rotating inertia (which improves acceleration), new intake/exhaust tract lengths and a revised exhaust system. There’s still a conventional six-speed transmission and power is delivered to the rear wheel via a conventional chain final drive.

Re-launched last fall, the SFV is only available in the U.S. in black and it looks, well, sort of ho-hum.

There’s a naked sport bike feel to it and at some angles it looks terrific, while other design cues, to our eyes, look just plain weird. The oddly shaped headlamp doesn’t do the SFV650 any favors and, because of the way the SFV650 is set up, it appears it’s carrying all of its weight at the front of the all-steel, trellis frame. That chest-heavy appearance is perhaps accentuated by the big gap between the top of the rear tire and fender. So, on looks alone, we feel the SFV650 is a bit of a compromise.

At 445lbs (wet), it’s not especially heavy, but loses out to the lighter Honda CBR500R that weighs in at 425lbs, or Triumph’s Street Triple at 403lbs and Ducati’s perennial Monster 696 which is the lightest of them all at 402lbs. Only the 460lbs Kawasaki Ninja 650 is heavier.

The SFV’s upright seating position is good. The low seat at 30.9 inches is far better than the last-gen SV650 and most riders will be able to get both feet on the ground at a stop. The issue for us is that the seat is another compromise on the SFV. To achieve a good riding position, the SFV is equipped with a wafer thin seat, which for long legs or heavier riders will become just plain uncomfortable after time. There is a solution with an aftermarket seat from Suzuki that offers an extra bit of padding, but that in turn will make the seating position higher.

There’s not much equipment at all on this bike and all of the instrumentation is housed in a single pod in the center of the bars. LCD speedo, analog tacho and all the usual warning lights are there, including a gear indicator. However, there’s no fuel gauge but there is a low fuel warning light backed up by an LCD reserve trip meter. So you’ll have to keep an idea on the number of miles you are doing to know how much gas you’re going through.

With a 3.8-gallon tank and an around an average of 50mpg you should be good for at least 175 miles before needing to fill up.

The SFV’s bars are well positioned and should suit most riders bringing everything close at hand but there is a turned-out angle at the end of them, which for this reviewer, proved a little uncomfortable on the wrists.

Up front there are skinny 41mm front forks that are spring-preload adjustable, as too is progressive-link rear suspension that can be set at seven points. The ride is good. Not outstanding but sufficient for the job in hand. You can mess around with the settings to get a better set-up to suit your riding style, but there’s no huge discernable difference between them all.

The SFV has a triple disc brake set-up, which is best described as adequate, with twin 290mm floating front discs and a 240mm single rear disc. There’s reasonable bite from the brakes but there’s definitely room for more without them becoming too fierce.

ABS is not available on the SFV. Not even as an option. Suzuki does offer an ABS version of the SFV in other markets just not the U.S. That we think is an oversight as it would make a real difference to increasing the appeal of this bike to novice or inexperienced riders. But, in this competitively priced sector, that would probably tips the price scales and make the SFV even more expensive.

The Suzuki SFV is not a difficult or a demanding bike to ride. In actual fact, it’s a pretty entertaining motorcycle thanks in part to its terrific v-twin engine that is always eager and willing. 71bhp at 8,400rpm and 47lb-ft and 6,400 delivers a flexible, easy powerband.

That’s more than enough to haul you out of corners at a fair rate and there is no hesitation from the SFV in getting past slower moving traffic. You don’t have to rev it too hard either as the power delivery is smooth and linear once you get over 3,500rpm. Then it will pull all the way up to the red line at 10,500rpm with no complaint. It sounds good too. At full chat there is an aggressive rasp to the exhaust note, which we really liked.

However, in slow speed traffic, the throttle on the SFV is a little tricky to get right. Close it down and then open it up slightly and there’s a slight lurch and, after time, this gets to be a little annoying. The throttle appears to be a little too sensitive at low speed and if you’re not paying attention you can make the bike surge forward in first gear. More experienced riders probably won’t even notice. But for some novices this could be a little intimidating.

On the move the SFV’s ride is compliant and we liked how direct and agile this Suzuki feels. It steers well too and gives a lot of rider feedback offering a good balance of agility and stability. Once you have learned some of its quirks it actually a pretty decent and fun motorcycle to ride.

The seat offers a good riding position. And because you’re more upright than on a sport bike you can see a long way ahead down the road. The problem is that unless you have a butt made from iron that thin seat offers no real support and gets pretty uncomfortable.

The SFV is an entertaining ride if that’s only what you’re looking for. Fit and finish is excellent, too, and the v-twin engine is a gem. As a starter motorcycle it’s worth considering because over time you’ll get to appreciate how entertaining and flexible that engine can be.

Compromised looks. It’s not pig ugly but there are some design cues that are very odd. Maybe the SFV would look better in another color or with the frame painted in a contrasting color, which it did at its original launch. But black is the only choice we get here in the U.S. The brakes are adequate but ABS would be a really good addition particularly for a novice rider.

Low speed throttle control needs to be watched and the seat is just plain uncomfortable.

At $7,999 the SFV is not exactly cheap when compared to the huge range of bikes that a novice rider could consider. First port of call would be the Honda CB500F that has a smaller engine but is available with ABS at $5,499 or its sibling the CB500F at $5,999 with ABS. Both of these bikes have been given the thumbs up by RideApart staff in recent week. Ducati’s Monster has Italian good looks and better performance ,but for several thousand dollars more. Triumph’s Street Triple ($9,399) is a lot of motorcycle for the money, while the Kawasaki Ninja 650 is a positive steal at $7,599.

“This motorcycle is cued off the classic SV650 — a motorcycle cult favorite regarded for its performance-to-price ratio. Suzuki’s middleweight pumps out a smooth spread of useable power that makes it perfect for jetting around town courtesy of its liquid-cooled 645cc V-Twin engine.” — Motorcycle-USA

Since it was first launched in 2009 here in the U.S., which was then followed by several years in exile, Suzuki’s SFV is now up against some really tough competition.

As a novice rider’s bike the SFV could do several things a lot better – low-speed throttle control, improved seating and better brakes for a start. It is, though, a likeable, competent motorcycle, entertaining and rewarding to ride and, for some people, it will still make a lot of sense.

The challenge the SFV faces is that the world has moved on along with all of its competitors, who in some cases are now faster, better equipped and cheaper.