A throwback throwdown for the ages.

In September, 2020, Honda announced its plans to enter India’s popular retro motorcycle segment. By the end of that same month, Team Red unveiled the 2021 H’Ness CB350. The model was fast-tracked to dealerships and whisked off of showroom floors, selling more than 10,000 units by February, 2021. While Honda’s blitz was undoubtedly impressive, the CB350’s soaring sales were bound to ruffle some feathers—namely, Royal Enfield’s.

India’s Royal Enfield has enjoyed an unchallenged reign over the country’s throwback market for years. Competitors like Jawa have taken their shot, but Enfield remains the undisputed champ in the class. However, around the time that Honda launched its new modern-classic, Enfield was having problems getting its Meteor 350 off the ground. The Meteor finally touched down in November, 2020, after months of delays, sparking a throwback throwdown for the ages.

While Royal Enfield launched the Meteor 350 in Europe and North America, Honda hasn’t announced plans to expand the H’ness’ territory beyond India and Japan. For that reason, we’ll have to resort to the tale of the tape to see how these two lightweights stack up against one another.

Featuring nearly identical displacements, the Meteor’s 349cc single ekes out a slim advantage over the CB350’s 348cc thumper. Both mills feature a single overhead camshaft, and the Meteor employs both air and liquid cooling. The Honda powerplant opts for less bore at 70mm and more stroke at 90.5 mm while the Enfield engine increases bore to 72mm but reduces stroke to 85.8 mm.

The Meteor and H’ness also share a 9.5:1 compression ratio, resulting in nearly identical power figures. However, the Honda conquers both categories with 20.8 horsepower and 22 lb-ft of torque over the Enfield’s 20.2 horsepower and 19.9 lb-ft of torque. Considering the H’ness also weighs in 22 pounds under the Meteor’s fighting weight, the performance edge almost certainly goes to the Red corner.

To get that power to the back wheel, both platforms utilize a wet, multi-plate clutch, five-speed gearbox, and chain final drive. Both bikes lean on classic styling, with cradle frames, telescoping, non-USD forks, dual shocks, flat seats, and big, round fuel tanks. Don’t let the old-school looks fool you, however. Both bikes have thoroughly modern running gear and feature fuel injection, electric start, and even a built-in nav system on the Meteor’s part. 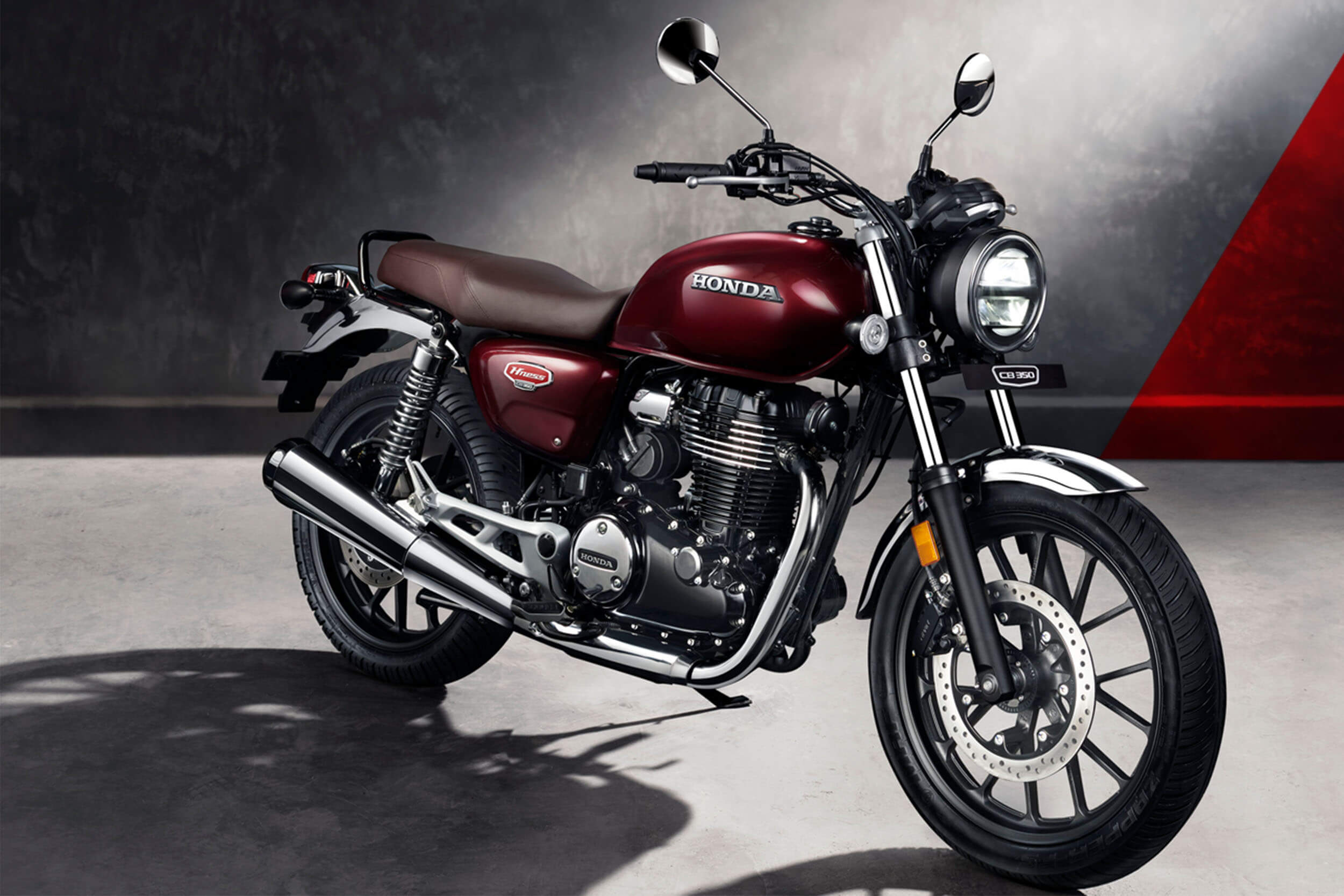 The Meteor’s 55.1-inch wheelbase is shorter than the H’Ness’ 56.7-inch measurement, and Royal Enfield’s cruiser surprisingly enjoys a 6.7-inch ground clearance over the CB350’s 6.5 inches. Seat height goes to the Meteor as well at 30.1 inches while the H’Ness lives up to its name at 31.5 inches.

Both can go the distance, however, with each model touting a four-gallon gas tank. They also share the same front-wheel attributes with 100/90 tires mounted to 19-inch wheels. The back end is another story though, with the Honda sporting an 18-inch wheel and 130/70 tires and the Meteor sitting on a 17-inch wheel shod in 140/70 tires.

The CB350’s 310mm front brake disc is beefier than Enfield’s 300mm rotor, but the Meteor strikes back with a 270mm rear disc to the H’Ness’ 240mm unit. Luckily, both platforms prioritize safety with dual-channel ABS and LED lighting. Yes, under close inspection, the spec sheet showdown is a blow-for-blow battle at this point, but buyers will certainly consider style when choosing between the two.

With the Meteor 350, Royal Enfield caters to the easy-riding crowd. The slightly-forward mid-controls, sweptback bars, and low seat height promote cruising, and the design language reflects that. The two-up style seat, bobber-influenced taillight, and chrome finishes all speak to bona fide cruiser fans. Yes, Royal Enfield is known for its café racer roots, but the new platform slots in nicely between the brand’s Classic 350/500 range, 650 Twin variants, and Himalayan adventure bike.

In the opposite corner, Honda borrowed heavily from its CB350 of the past. While they transformed the old parallel-twin into a 348cc single and updated to disc brakes, many of the old qualities remain. From the iconic tank shape to the bench seat, from the chrome fenders to the taillight, the H’Ness is a proper call back to the CB350s of yore.

Only in production between 1968 and 1973, the original CB350 sold over 250,000 units. If the new Honda can conjure a fraction of that magic, it will be a huge success, but despite the H’Ness moniker, it caters to a much broader audience. The CB350s of the ‘60 and ‘70s boasted 36 horsepower, a 110-mph top speed, and weighed 374 pounds (wet). The new CB350, however, takes a page from Royal Enfield’s playbook, sacrificing performance for a more approachable riding experience.

With the two bikes featuring nearly identical engines, chassis, dimensions, and electronic aids, the looks might be the deciding factor in the end. Rarely do we see such evenly matched combatants in the Spec Showdown ring, but the retro Indian market is one hotly contested segment these days. This might be the first round in Honda and Royal Enfield’s brewing bout, but if the rest of the showdown is anything like this, we’re in for one legendary rivalry.