This Ducati Was So Irresistible, Thieves Busted Through A Wall To Get It 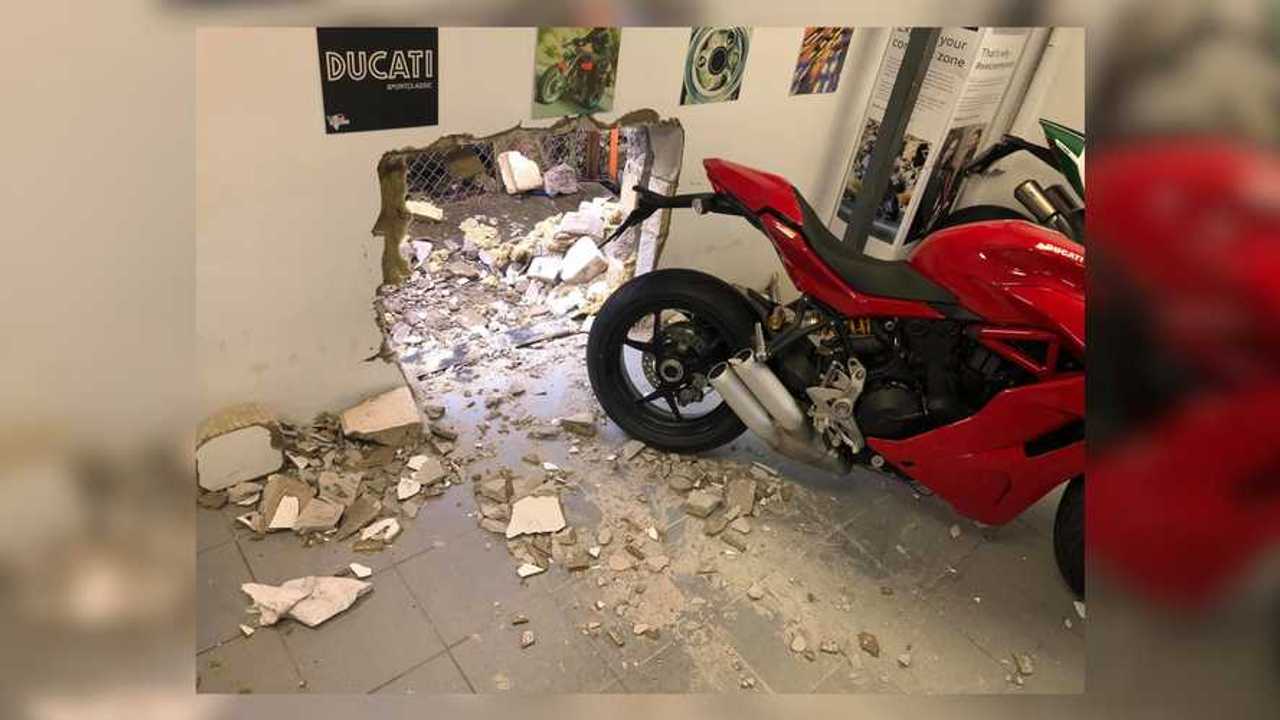 Ducati motorcycles set many hearts around the world alight with dreams of ownership. The Panigale and Streetfighter V4 are certainly no exceptions to this rule. While most of us might dream of exchanging our local currency for our most-wanted Ducati in the future, some pretty enterprising thieves in Winchester, Hampshire, U.K. decided to take an unscrupulous shortcut to ownership.

UK Fam, You Have Our Sympathy:

Watch A Stolen BMW Get Recovered By A Tracking Company

This Bike Rode Around The World Got Stolen At Home. Can You Help?

We don’t know for sure how many thieves came in to rob Moto Rapido Ducati of a V4 that was spoken for and was waiting to be delivered to its new owner. However, it’s probably a safe bet that more than one was involved as the scheme involved cutting a hole in an outside wall, then pulling the nearest bike out through the hole so they could take it away.

The bike was located under a flight of stairs, conveniently out of view of both the shop’s CCTV and alarm sensors according to Moto Rapido owner Steve Moore. Clearly, this plan took a carefully coordinated effort on the part of these criminals.

Thieves absconded with their ill-gotten Duc on the night of February 19, 2020. According to the shop, it carried an MSRP of £35,000, or around US $45,210. Although the shop owner didn’t specify a model in any of his posts, he did mention in one of them that it’s a V4R, which all but guarantees that it’s a Panigale.

According to the Hampshire Chronicle, the V4R was likely not even supposed to be the target of this theft. Instead, another unspecified bike estimated to be about a third of the price was. Presumably, that’s because the V4R hadn’t been sitting in the spot under the stairs for very long. Another, less expensive bike was previously parked there and had been for some time. Amazingly, the thieves didn't touch the Desmosedici that was apparently close by. Does that mean they'd have taken the kiddie Ducati toy bike instead if it had only been in the right place? We can only wonder.

Anyway, Moore told the Hampshire Chronicle that other motorcycle dealerships had since contacted him to say that they’d had bikes stolen the same way. CCTV footage from a camera installed on a neighboring building shows the thieves knocking out those cameras and taking out at least one security light prior to making off with the V4R. Luckily, Ducati is immediately shipping a replacement bike to Moto Rapido for the customer to pick up.

As for the shop itself, it patched that wall up immediately and stuck a big, burly Multistrada in front of the hole to stand guard.