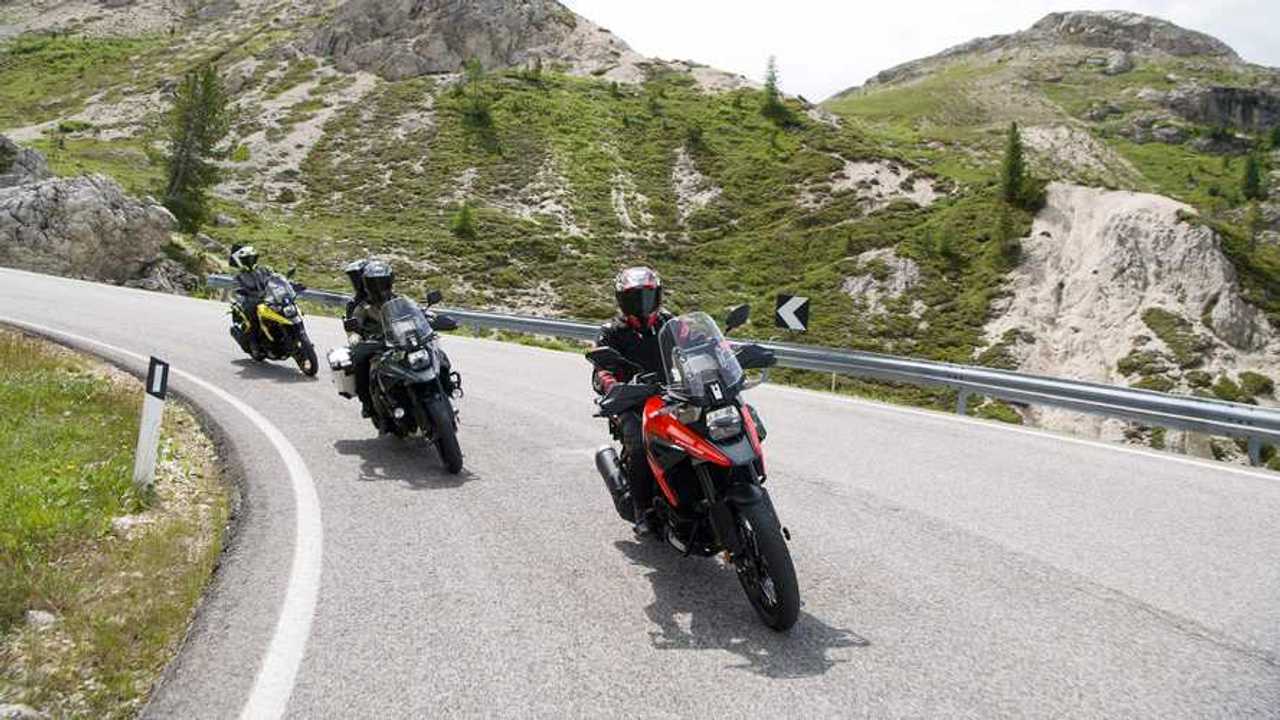 Paging DR Big to the podium.

The highly anticipated new 2020 Suzuki V-Strom was launched on Tuesday at EICMA with a twist: not only does the new Strom receive a new look but also changes its name from 1000 to 1050. Here’s a look at Suzuki’s new adventure-touring flagship.

Design-wise, there are a number of upgraded features on this new generation of the V-Strom. You’ll notice the new rectangular headlight that replaces the almond-shape unit. The arch of the gas tank is more pronounced and angular. The single-piece saddle has been replaced with a two-part one. The handlebar is made of vibration-damping, tapered aluminum and is mounted with a new LCD instrument panel and a mounting bar that can receive a navigation system.

Taking the touring and adventure aspect of its personality a step further, the new V-Strom also features a USB port to charge GPS and phones, as well as three riding modes that modify the power mapping and adapt the motorcycle’s behavior to the rider’s needs.

The main attraction in the new V-Strom is, of course, the name change from 1000 to 1050—while the engine remains a 1,037cc, Suzuki promises that the V-twin produces more horsepower while preserving its low-end grunt and optimal fuel economy. The power figures have yet to be announced.

The more rugged V-Strom 1050XT has also been thoroughly updated and armed with an array of systems and technology that make it more adventurous. Among other things, the model receives the Suzuki Intelligent Ride System (S.I.R.S.) that includes such systems as cruise control, a new hill hold control technology, and a slope dependent control system that keeps the rear wheel on the ground while riding downhill. The model’s Motion Track Antilock & Combined Brake System has been upgraded that adapts the braking force to the presence of a passenger or of luggage.

The XT is also equipped with an adjustable windscreen to minimize turbulence and improve comfort, a height-adjustable saddle, quick-release aluminum panniers, heated grips, and a center stand.

Since the V-Strom test mules were spotted a few months ago, there’s been talk of a revival of Suzuki DR Big—the early 90s DR 800 armed with a gigantic single cylinder. All the buzz wasn’t exactly wrong. So what does the model borrow from its ancestor? A livery. One of the available color schemes on the V-Strom 1050XT is an orange and white paint job inspired by the DR. The XT is also offered in a Championship Yellow scheme that pays homage to the DR-Z.

A selection of accessories will be available to buyers as well to take the bike’s convenience a step further. Pricing and availability of the new 2020 Suzuki V-Strom 1050 and 1050XT will be announced at a later time.