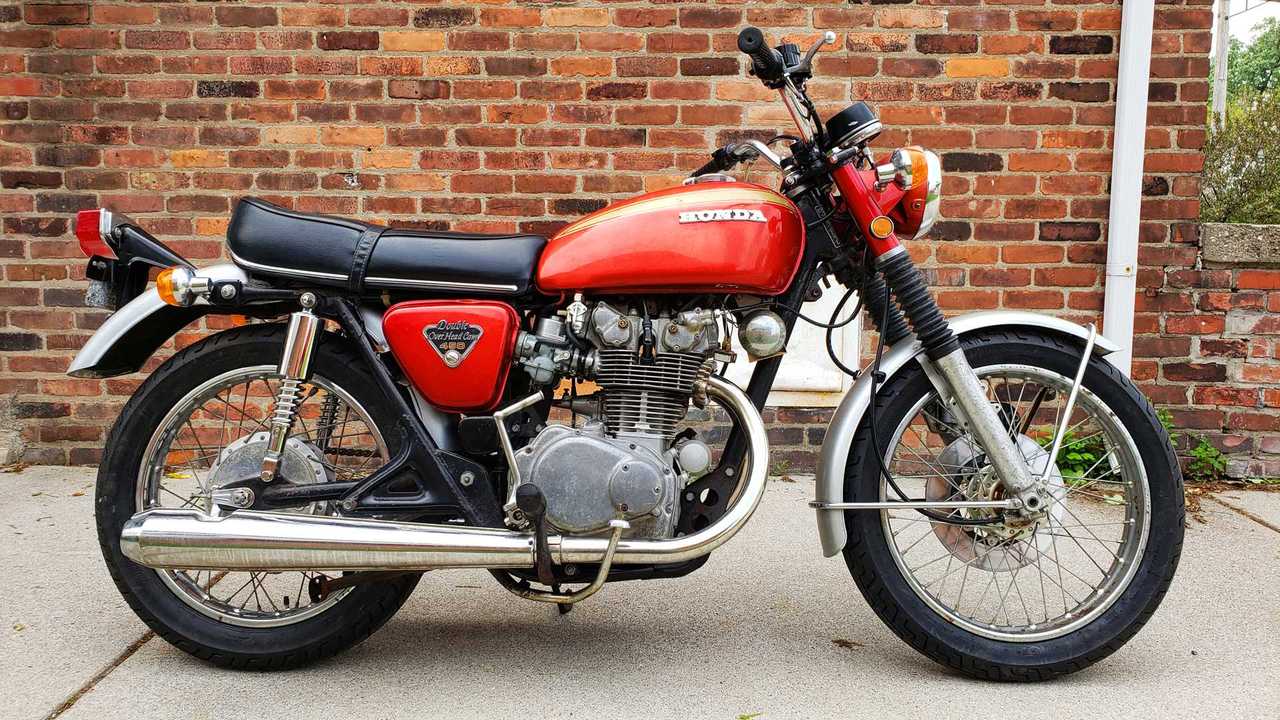 None of this was supposed to happen...

Those of you who have been reading along may remember that last year I got into buying, fixing, and flipping old bikes. This, of course, was a fantastic idea with no unforeseen troubles or obstacles. My first rescue was a heavily abused 1974 Honda CB200 with a wonky camshaft that had recently been relegated to parts bike status. More small bikes quickly followed—an '02 Buell Blast that lost power under throttle and had no rear brakes, a 60-something BSA basket case that had been in a garage fire and had no engine—each one sadder and in rougher condition than the last. I was awash in long-abandoned (mostly) Japanese iron.

Among these mechanical charity cases was a filthy '71 Honda CB450, a bike I thought would bring in a pretty penny if I could get it running. Parked in a leaky, rural Southeast Michigan barn since 2003, this bike was a serious diamond in the rough. It was, as I mentioned before, extremely filthy with ancient mud caked inside the fenders and a layer of dirt on every surface. I even found grass under the saddle for Pete's sake. Every piece of brightwork that wasn't pitted covered in scabrous rust was coated in splotchy greenish-white corrosion. The circa 1977 Dunlops were technically tires in the sense that they were round and made of rubber, and the brakes were totally absent.

Don't worry, honey. You're going to a much better place... Detroit!

It wasn't all bad, though. The engine turned over no problem and it had good compression, the paint was still surprisingly good (in places) and, hey, it was a Honda. How hard could it be? I forked over $500 American dollars, stuffed it in the back of the van, and off we went. Little did I know that this flip would not, in the long run, turn out like I planned.

For the first couple of months the CB450 sat in the corner while I toiled away putting to rights everything the previous owners had ruined on the CB200. I couldn't stop looking at it though, and I couldn't wait to tear into it. Once I finally got to 200 running, for various metrics of running, I moved it out of the workspace and replaced it with the big red 450. I took stock of what I needed, placed some orders, and parts began to flow in from 4into1, David Silver Spares, and Common Motor Collective. It wouldn't be long before I had this old bike running and out of my garage. That's what I thought, at any rate.

I believe I've mentioned before that I have various imaginary engineers—Nigel, Kurt (or, on some days, his brother Klaus), Daryl, Hiro—who I cuss while working on various bikes depending on the bike in question's country of origin? Well, for the 450 I bypassed Hiro and went straight to the Old Man and started cussing Soichiro Honda himself. Every stripped screw, weird-sized bolt, or dumb engineering decision (the fuel tank crossover, for example, and the overly-complicated clutch actuator) elicited a loud Goddammit, Soichiro from me. It was so frustrating, that old 450! Late at night you could hear my lamentations floating over Detroit, and never have I been angrier at a bike (and an entire OEM) than I was while wrenching on it.

So it begins...
Ugh, all this just to change the damn oil.

Eventually, though, I noticed something strange. I couldn't stay away from the 450. My regard and respect for it grew as I spent more time with it. I started to care for it more and my work got gentler and more deliberate. I replaced, repaired, or upgraded parts I never planned on touching like the rear wheel bearings, the shocks, the entirety of the front brake system. I upgraded the old, busted regulator and rectifier with a combo regulator/rectifier from Common Motor and performed the electrical upgrades that allow the stator to run at full power at all times rather than just when the headlight was on. I even changed the fork oil.

Along with the mechanical issues I started to actually clean it. I bought waxes and polishes and a hundred different grains of sandpaper. I spent hours fiddling scrubbing rust off 50 year old bolt heads with a wire wheel and apple cider vinegar. I bought cutting compound, something I've never done before. I cleaned chrome and repainted parts and scrubbed and scrubbed and scrubbed. This was, of course, in between rebuilding carbs and replacing worn-out parts. I wasn't just fixing this thing up, I was restoring it. You all see where this is going, right?

I was in denial about my feelings for months until one night after a few beers and some vigorous wrenching, I threw my leg over the saddle and just sat the bike. It was propped up on its center stand there in the garage with the Christmas lights twinkling in the newly polished chrome and the overhead fluorescents making stripes on the tank. Man, I thought to myself, I love this bike. That was it, I was done for. With those five words the CB450 was officially mine and lived at my house. I never looked back.

Now, after months of tinkering and polishing and cussing and getting oil everywhere because I have sloppy shop habits, the CB450 is finally done. Well, mostly. I got it registered and insured, and even got a sweet 1971 Michigan plate for it. I've put about 20 or so miles on it since I called it "done" and I'm still tuning the old Kehin round-top carbs to eliminate their notorious flat spots. I even, just the other day, bought Common Motor's Shockwave electronic ignition—a kit that the guys from CMC developed in house for Honda's late-60s/early-70s CB350, CB360, CB450, CB500 twins and their various scrambler variants—to replace the points and condensers. I'll be writing about the Shockwave as soon as it arrives and I get it installed.

So, yeah. That's the story of how I fell in love with a barn find Honda I had every intention of selling. The short version at any rate. Let it serve as a warning to you, faithful readers. Old Japanese bikes have an irresistible charm about them (some more than others, obviously), and if you let your guard down even a little bit you'll end up with a garage full of them.

PS: If you're into old Hondas, check out Common Motor's YouTube page. Brendan, William, and the rest of the CMC crew have a ton of really well done, enjoyable, easy to understand how-to videos over there. The subjects range from balancing wheels and adjusting clutches to full-on engine rebuilds. Go check 'em out, and tell 'em I sent you.