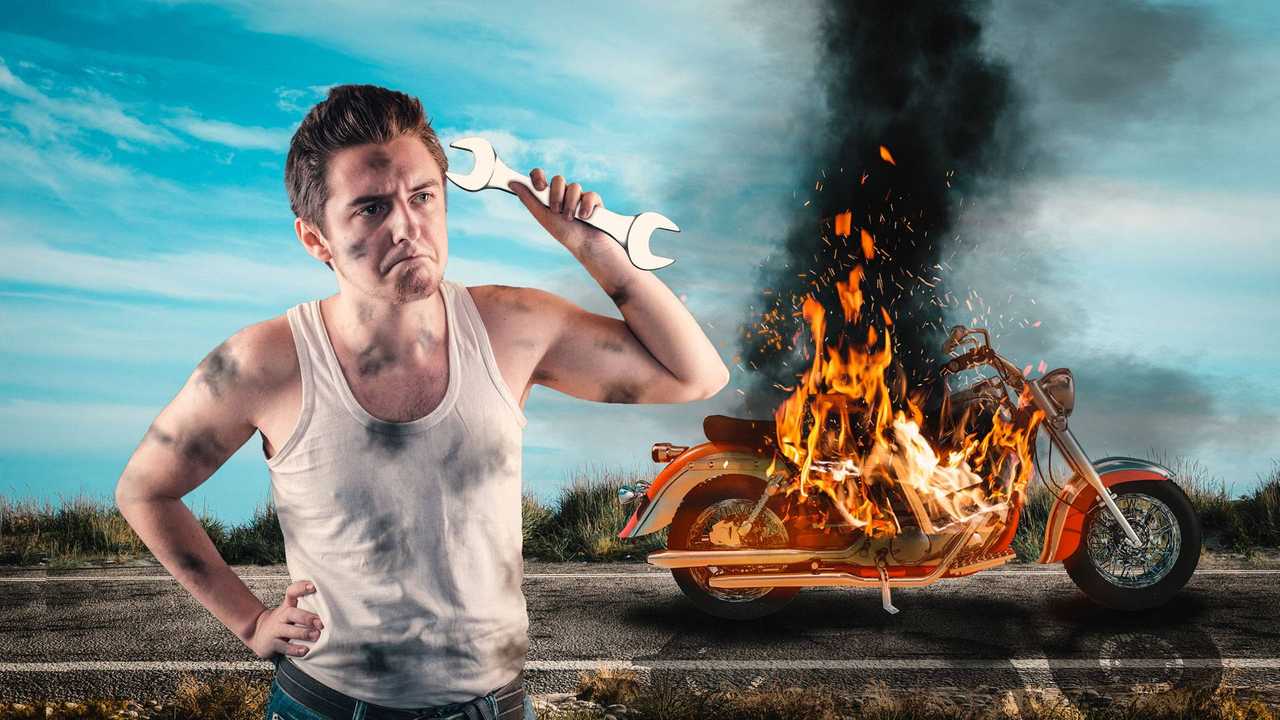 Soichiro would be proud. Then he'd be very, very angry

So, there's an unwritten rule among motorcyclists that states that everyone who owned your bike before you did is a colossal idiot while you are a pure and perfect genius who would never take a shortcut or hamfist a repair. In short, previous owners suck. I think we—and by "we" I mean those of us who wrench on our own bikes—generally work hard to not be that previous owner that future owners piss and moan about. Things happen, though. Sometimes there's a weld so ugly or a bodge so dodgy or a mistake so boneheaded that we become that previous owner, if only in our own embarrassed heads. It happens, and hopefully, we learn from it and become better mechanics (and hopefully we can hide it well enough that no one ever finds out).

Why am I talking about POs today? Well, you guys remember that '74 CB200 I picked up a few weeks ago, right? Ever since I tore into that little bike it's been a whirlwind of emotions over here. I bought the thing as a non-runner from a pal for $300. She'd bought it from some guy back in '12 as a parts bike for her own CB200 but never got around to doing anything with it. So it sat, sad and neglected until I bought it off her as a restore and flip project a few weeks ago.

Over the weeks I've had it I replaced a bunch of things—ignition switch, coil, condenser, tach, some cables, etc—with either NOS parts or eBay specials (shout out once again to 4into1, they rule). I soaked and rebuilt the carbs and, with a new petcock and fuel lines, got it running and idling again! Unfortunately, it was only running on one cylinder. Todd (of Business in the Front fame) and I did some troubleshooting with the engine in the frame and couldn't figure out precisely what the deal was. The mufflers were a disaster and all plugged up so I sawed them off (the header and muffler is all one piece on the CB200), and that caused that cylinder to fire intermittently, but it didn't really solve anything. So, in for a penny in for a pound, I hauled the engine out for a more in-depth look.

This is where it gets good. Well, for various metrics of "good" at any rate. First, I took the rocker cover off and discovered that it didn't have a gasket. Huh. The rockers on the left side, which is the side that wasn't firing, were all covered in a viscous goop that was a combo of oil, metal shavings, water, dirt, and other unidentifiable gunk. Then I popped the master link off the cam chain and separated the head from the jugs. Oh, there's a gasket! Whew, okay. The tops of the pistons looked good, no damage or anything, but you could totally tell that the left side hadn't been firing. The jugs came off next, and that's where the horror began.

RTV! RTV everywhere! In the oil holes, down the stud holes, smeared on the outside of the cylinders. Turns out someone had been in this engine before me and had replaced all but one of the gaskets with RTV. It, uh, it was really gross. So, okay, that probably explains the lack of compression. It's a wonder this engine ran at all. Soichiro and the boys at Honda should all be proud of this sturdy little engine for putting up with that level of half-assery. This was definitely up there with the worst of PO tricks I'd ever seen. Little did I know it was about to get worse.

If you don't know, the 200cc twin in the CB200 has a single overhead cam. It runs through the head and out holes in either side where it drives the tach (right side) and the points (left side). It doesn't have traditional bearings. Instead, it rests in "bearing surfaces" inside the tach and points boxes. Oil seals keep the tach drive and points dry in their little boxes. The bearing surfaces are lubricated by the oil pump, but since they're the furthest point away from the pump they're the first things to fail if you skimp on maintenance. Let your oil get old or dirty, and the camshaft will seize up in your head and you'll have a real bad day. With me so far? Good.

See that? That there is the cam from a CB200, along with the points cover/box (bottom) and the tach drive cover/box (top). See those little snoots on the boxes? That's where the bearing surfaces are (these boxes have been converted to roller bearings, a common mod but one I'm not doing). Those snoots go through the holes in the sides of the head and the cam passes through them. It's a neat system and was pretty common on the small Honda twins around that time. Pay close attention to how the bottom of that cam, the part that goes into the points cover, is finely machined and steps down in size in two distinct parts.

Now THIS is the camshaft out of my CB200. Notice how it's tapered and extremely chewed up? See how there's some basic, no-name, Chinesium bearing hammered on there? That's totally not how that works. Like, at all. The bearing was held in place in the head by three small shims. The shims extended to the outside of the head, so whoever did this made a custom gasket that is thicker than stock with cutouts in it to cover the shims and prevent leaking. As near as Todd and I can figure, some PO in the distant past skimped on their maintenance and the camshaft seized in the head. Instead of, like, just fixing it they ground the cam down on a bench grinder (I assume, but who knows?), hammered that bearing on there, and figured they were good to go. Probably the same idiot with the RTV.

The thing is, it worked. There's absolutely no reason that bodge should have worked but it did. It ran for me with some fresh gas and new points. Eagerly ran, in fact. Todd and I were in awe. After shouting at the head, "WHO DID THIS TO YOU?" we came to view this graduate-level bit of hillbilly engineering with equal parts respect and wonder. Who does this sort of thing? Why? Why go through all that effort and time to fix something the wrong way? Why did it ever work?

We reckon it worked because of Honda engineering. Well, that, and a hell of a lot of luck. That trick with the camshaft is by far the dumbest PO trick I've ever come across. It was also like poetry in its previous owner-ness. A perfect example of the hamfisted PO bodge taking something relatively simple (replacing a camshaft and removable/replaceable bearing surface) and making it ten times harder than it needs to be.

As you can imagine, this discovery has stalled the project for a bit. I ordered a used head, complete with camshaft, rockers, valves, etc., off eBay yesterday along with a couple new cylinder studs since one was rusted all the way down. The head was good and cheap despite being complete, and if worst comes to worst I can mix and match parts from that and my existing head to make something that works. I also grabbed a full gasket set from 4into1 so I can put this thing back together the right way. It'll need a cam chain (oh, and a final drive chain) and it'll be done. I think. Probably.