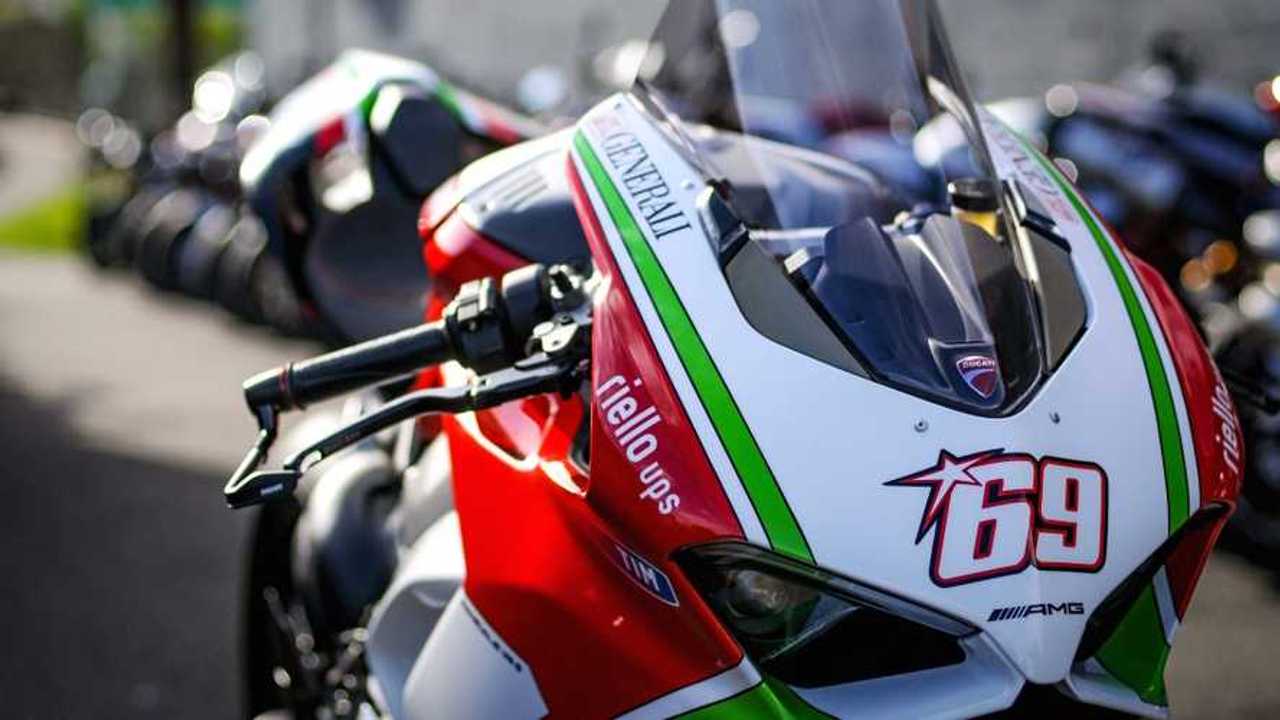 In May of 2017 the motorcycling world was rocked by the news that ex-premier class world champion and genuinely all around good-guy, Nicky Hayden had passed away after sustaining injuries from being hit by a car while training on his bicycle. Since the Kentucky Kid’s tragic passing, there has been an outpour of support from the racing community. In addition to Dorna officially retiring Hayden’s number at the most recent Americas GP in Austin, (not to mention his hometown erecting a statue and declaring a remembrance day back in June) another homage to the #69 racer was revealed in the form of a special Hayden GP12-themed Ducati Panigale V4.

Built by MotoCorsa, a well-known, Portland-based Ducati dealership, the Italian V4 has been treated to a bevy of both aesthetic and performance mods. The first, and most apparent change is the livery, recreating the design seen on Hayden’s 2012 Ducati MotoGP mount, sporting a replica tri-color scheme adorned in Hayden's various sponsor logos of the era. Unlike most race liveries, which largely use decals for a great deal of the work, the paint job on MotoCorsa’s Hayden tribute was done by hand.

The stock suspension on the Panigale was jettisoned in favor of even higher-spec Ohlins bits fore (R/T forks) and aft (TTX monoshock) supplemented by a steering damper form the Swedish suspension outfit. The Duck also received an STM dry clutch kit off the V4 R. Finishing out the performance mods are a set of BST’s Superleggera carbon fiber rims (shod in sticky Pirelli Diablo Supercorsa rubber), bringing down the weight of the build's unsprung mass, while burnt fumes now exit a slip-on titanium exhaust from Akrapovic.

Other additions include mirror block-off indicators and a fender eliminator with built-in signals, both from Futurismoto, and machined rear-sets, levers, lever-guard, race seat, axle sliders, a tall, race windscreen from the Ducati Performance catalogue, as well as its carbon fiber heel guards, rear fender, tank cover, and swing-arm cover, and some other odds and ends from Rizoma such as the gas-cap and anodized bar-ends. As a finishing touch, the top triple was laser-engraved with Hayden’s race number (#69) as well as a “01/01” denoting the tribute’s one-off nature.

If you didn’t have a chance to see the V4 at the Circuit of the Americas, it’ll be making a second appearance at the Laguna Seca WSBK round in July (12th-14th). Around a fortnight later on August 1st, 2019, the Hayden tribute will head to the digital auction-block of eBay, where it’ll reportedly have a BIN price of $69,000—a blatant reference to the late racer’s number. While this may seem like a lot (because it is), it’s worth noting that MotoCorsa is donating everything north of the reserve price to the Nicky Hayden Foundation—a charity managed by the Hayden clan.

“We wanted to do something special for Nicky Hayden and the NH Foundation, so we could honor him and his legacy, and the best way we could think of to honor Nicky’s memory was by building a tribute bike based of the livery of his 2012 Ducati MotoGP bike,” stated Jaime Rucklos, MotoCorsa’s GM. “During his years as a Ducati factory rider, he always represented the brand with such class, and had a positive impact on customers and dealers worldwide. We certainly all miss him.”