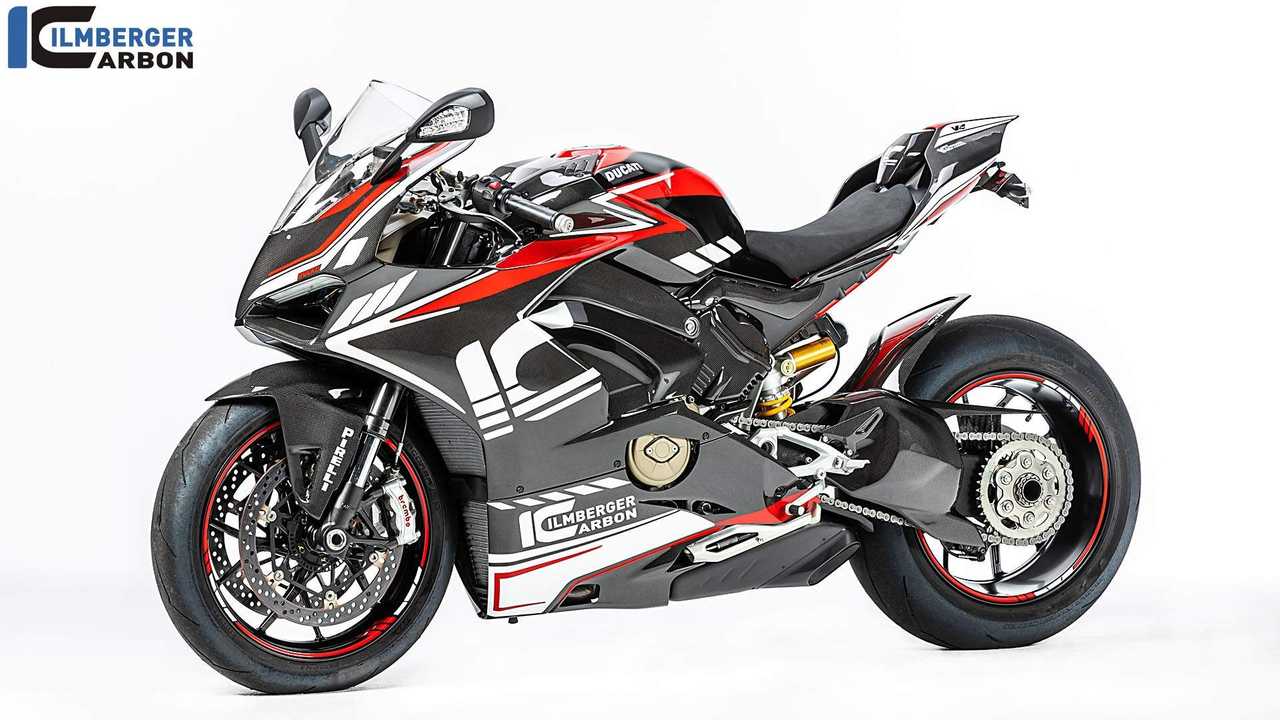 I've got a fever, and the only prescription is more carbon

Ilmberger Carbon has announced a new recipient for their treatment of custom carbon fiber parts; the Ducati Panigale V4 Carbon.

Ilmberger Carbon was founded by German motorcycle racer Julius Ilmberger in 1990. Since then, the shop has grown to produce carbon fiber parts for a wide selection of motorcycles and cars. The manufacturers have noticed, too. When BMW Motorrad created their $78,000 HP4 Race they commissioned Ilmberger to create the all-carbon body panels.

The company's latest build decks out the Ducati Panigale V4 in lightweight carbon fiber. This bike now features full carbon fiber shell, plus frame and engine covers. Although I think anything Italian, particularly Ducatis, look best in red, I can make an exception to my rule for unpainted carbon fiber components. The bike still retains its looks but with a more serious and high-tech appearance thanks to the material.

These components don't just look good, either. Ilmberger uses the autoclave construction process to create the lightest and toughest carbon fiber pieces. They are also ultraviolet resistant, so they won't fade after weeks and months of fun in the sun. All of their parts are TUV and ABE approved and are environmentally friendly. Parts are available individually or in a full package so you can add as much or as little carbon fiber to your Panigale V4 as you want. Each order also includes free shipping, no matter how much or little you buy.

If you don't have a Ducati Panigale V4, fear not. Ilmberger offers carbon fiber parts for a wide variety of motorcycles, ranging from Aprilia to Triumph, and including BMW, Buell, Honda, Husqvarna, Kawasaki, Suzuki, and even Harley Davidson, with numerous models covered in each brand. No matter what you ride (except my Honda PC800), Ilmberger has you covered in carbon fiber.

Ilmberger's latest build, the Ducati Panigale V4 Carbon, is a real head-turner. This bike now features full carbon fiber shell, plus frame and engine covers. The attention to detail and precision carbon fiber manufacturing at Ilmberger is truly impressive. Attached are a few images of this stunning Panigale V4 Carbon.

Ilmberger uses superior autoclave carbon process with the highest standard in prepreg weaving. This process creates the lightest and toughest carbon fiber pieces that are UV resistant. All their parts are TUV and ABE approved and are environmentally friendly.

Ilmberger also provides carbon fiber parts direct to riders and whether they order one part or an entire carbon bike package they are shipped to the US with free FedEx shipping.