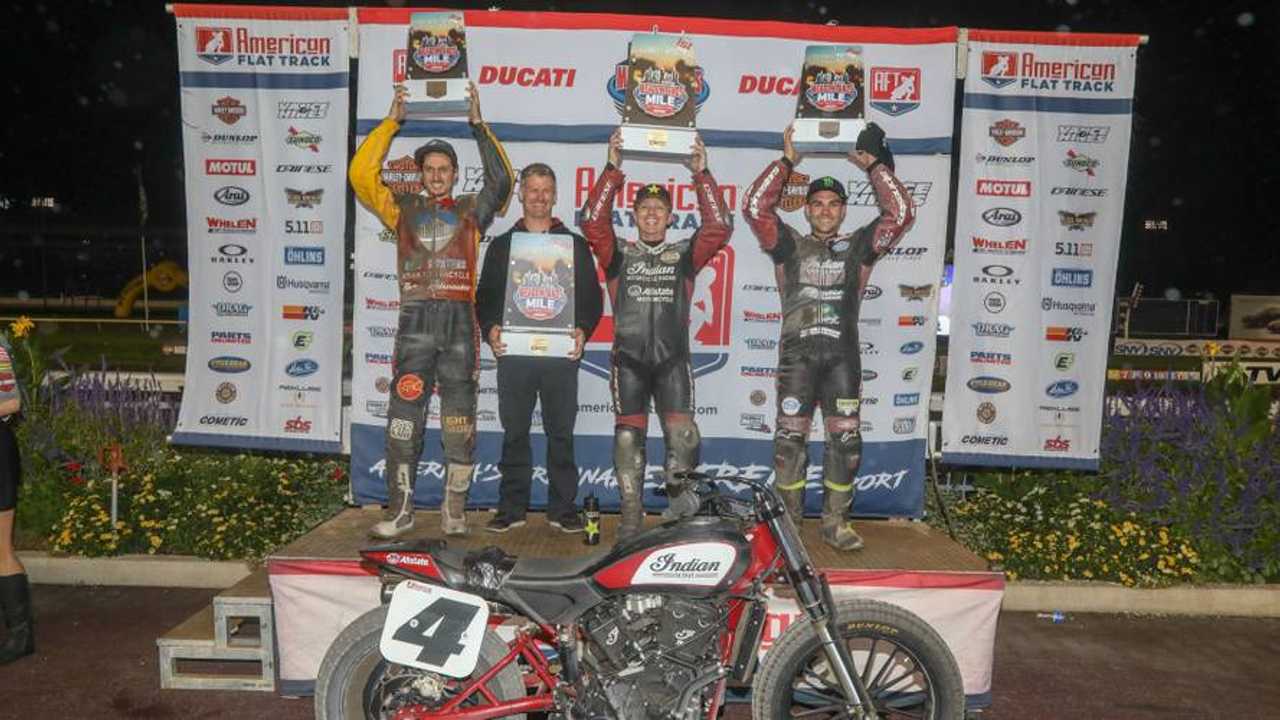 The only thing that could stop them was time itself

It's finally over. After the screaming of engines and competitors finally abated at this year's Meadowlands Mile, Indian Motorcycle's Wrecking Crew and assorted privateers stood victorious. The unstoppable juggernaut that is Indian flat track racing took the podium and the first five slots. Again. After the dust settled it was Wrecking Crew rider Bryan Smith in first, his colleague Jared Mees in second, and privateer Jeffery Carver Jr. in third. It was, as they say, a hell of a race.

“The riders raced hard and really put on an incredible show for all the fans,” said Indian's Vice President of Racing, Technology, and Service Gary Gray. “The Meadowlands Mile is a fantastic track and a really nice venue. Hats off to AFT and all the riders for a great season and a memorable season finale.”

It was especially cool that Smith won, seeing as how he broke his leg back in the season's third race. He came back to win three of the last four races of the season, which isn't too shabby. Mees finished the season with 10 wins and an additional six top-five finishes. That, also, is not too shabby.

The race at the Meadowlands Mile was also a bittersweet occasion as 25-year flat track vet Kenny Coolberth, Jr. hung up his leathers and rolled his FTR750 into the garage for the last time. During his illustrious career, he won three Grand National Titles and had a total of 36 victories.

So, now that the season is over what will Mees and Co. do with their time? Probably practice, work on bikes, and figure out new and interesting ways to utterly destroy their opponents come 2019. Stay tuned for next season, it'll probably be a blast.

The Main event at the Meadowlands Mile was nothing short of exciting, as Smith and Mees battled for the top position through all 25 laps. Mees lead for the majority of the Main, though, the two exchanged passes throughout. Smith ultimately delivered the final pass in turn three of the last lap and captured his third win of the 2018 season. Carver worked his way through the pack and made several key passes in the final laps to get on the box for the eighth time this season.

“The riders raced hard and really put on an incredible show for all the fans,” said Gary Gray, Vice President – Racing, Technology & Service for Indian Motorcycle. “The Meadowlands Mile is a fantastic track and a really nice venue. Hats off to AFT and all the riders for a great season and a memorable season finale.”

Smith, who suffered a broken leg in the third race of the season, finished the 2018 season by winning three of the final four races, including back-to-back wins to close out the year at the Minnesota Mile and Meadowlands Mile. Mees, the 2018 Grand National Champion, finished the year with 10 wins and an additional six top-five finishes.

Additionally, the Meadowlands Mile marked the final race for AFT legend Kenny Coolbeth Jr. Wrapping up his illustrious career as an Indian Motorcycle privateer aboard the FTR750, Coolbeth won one race and added five additional top-five finishes in 2018. His 25-year career includes three Grand National Titles and his 36 victories lands him fifth all time in total wins.