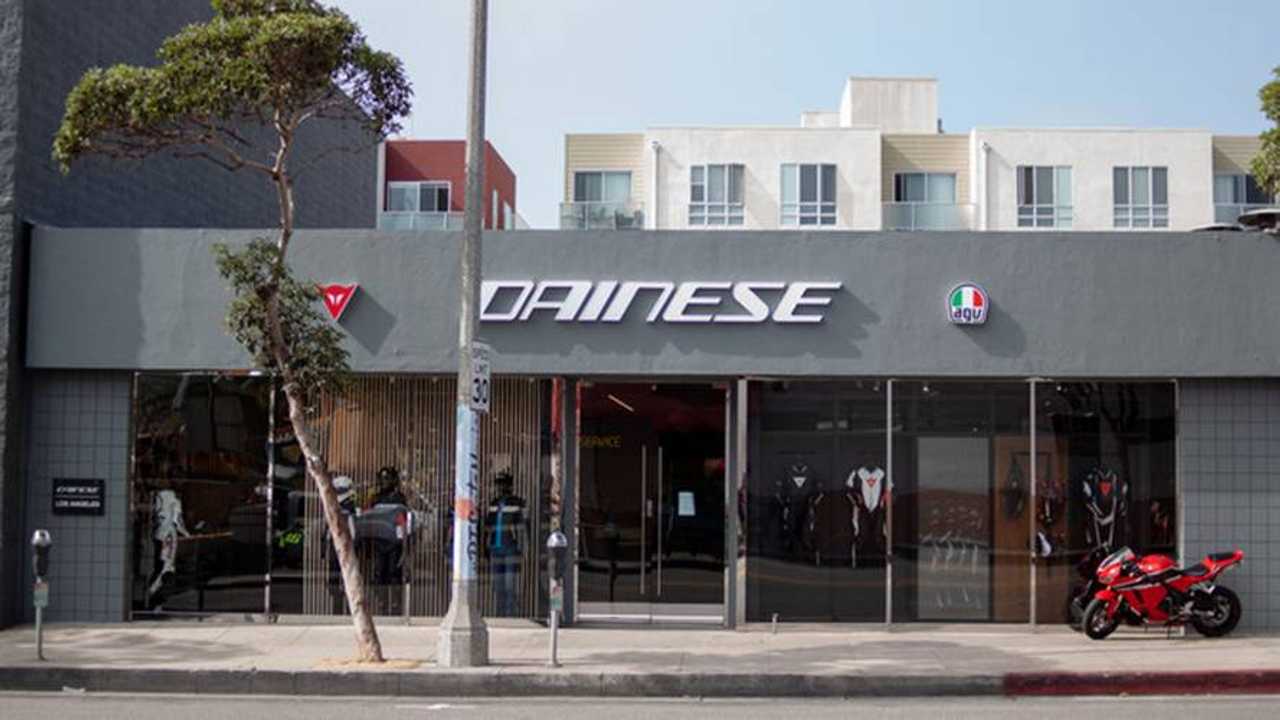 Another good reason to visit LA

Dainese is one of the only motorcycle gear manufacturers with its own line of stores. Harley has 'em, typically in touristy areas, but not many others do. Since Dainese is an Italian company, most of its stores are on The Continent. That said, Dainese stores have slowly been popping up here in the colonies over the past few years. The latest one, just announced, is in Santa Monica, California.

The Dainese Custom Works Tour is Back

The store, which is the company's tenth worldwide, is an exercise in the kind of bare concrete and exposed beam minimalism beloved by ad execs and college kids. It features a full line of Dainese, AGV, and Dainese Settandadue gear including suits, helmets, gloves, jackets, pants—the whole shebang. It's also part of the Dainese Works program, so if you're in the neighborhood you can just waltz in and get fitted for a custom tailored jacket or racing suit. Neat, eh?

“The Dainese team is thrilled to have the new concept store open in Los Angeles, and to be able to better serve the many riders in the region as well as visitors to the area,” said Roberto Sadowsky, Executive Vice President of Dainese North America. “The Dainese store experience is special. It takes you back in time through the rich history of the sport, while at the same time highlighting the most cutting-edge products and technology used by Valentino Rossi and other top athletes.”

It's not just a store either. Okay, well, it's mostly a store, but alongside selling fancypants helmets and riding suits, the Santa Monica store will be holding monthly events and new rider nights all throughout the year. If you'd like to know more, check out the press release below or mosey on over to the store's website.

CORRECTION: Okay, so, I forgot that Harley does, in fact, have gear-only storefronts. I even wrote about them—the ones in Alaska, at least—a month or two ago. I've corrected my stupid mistake here so don't @ me anymore, GOSH!. Mea culpa, mea culpa, mea maxima culpa.

The design of the Dainese Store Los Angeles is a minimalist approach that features raw materials, and the "room in a room" concept becomes the focus of attention for special projects and storytelling. The brand's fully redesigned retail concept, developed for Dainese by architect Renato Montagner, speaks to all riding styles: racing, street, touring, urban and lifestyle. The Dainese Store Los Angeles is the 10th location worldwide to feature the new retail approach, offering customers full immersion in the rich heritage of the Dainese and AGV brands.

In addition to offering the wide product lines of Dainese and AGV, the concept store showcases a dissected Valentino Rossi suit that shows off the nearly 360 pieces that make up a Dainese Moto GP racing suit. Other highlights include the store's Custom Works program, offering a made-to-measure experience for riders to design and customize their dream leathers. Dainese Settantadue, a new brand that resurrects the history of motorcycle clothing in the glory years and gives it a contemporary heritage twist, with garments that combine elegance and technical solutions that meet today’s safety requirements, is currently featured in the room-in-a-room area. Racing suits and jackets with Dainese's integrated D-Air® technology, a proprietary wearable airbag system providing unmatched protection for riders, are on display and available.

The new store will also feature the full line of AGV helmets, including the Red Dot award-winning SPORTMODULAR, the world’s first fully carbon fiber modular helmet. A unique display of the SPORTMODULAR highlights the 65 pieces that together form the first-of-its-kind modular helmet. Also on display is the AGV Legends collection with the X3000 and X70 styles from racing legends Giacomo Agostini and Renzo Pasolini brought back to life. AGV Legends is a perfect complement to the contemporary heritage jackets, pants, shoes, gloves and accessories from the Dainese Settantadue brand.

“The Dainese team is thrilled to have the new concept store open in Los Angeles, and to be able to better serve the many riders in the region as well as visitors to the area,” said Roberto Sadowsky, Executive Vice President of Dainese North America. “The Dainese store experience is special. It takes you back in time through the rich history of the sport, while at the same time highlighting the most cutting-edge products and technology used by Valentino Rossi and other top athletes.”

The Dainese Los Angeles store will host monthly events and new rider nights throughout the year. The store also offers free ozone boot, garment, and helmet sanitization for customers, as well as phone orders and free home shipments within the USA.

The Dainese Store Los Angeles is located at 1418 Lincoln Ave. Santa Monica, CA 90401. Hours are Monday to Friday from 10am to 6pm, Saturday 11am to 5pm, and Sunday from 12pm-5pm. The store offers a parking lot dedicated to Dainese customers.