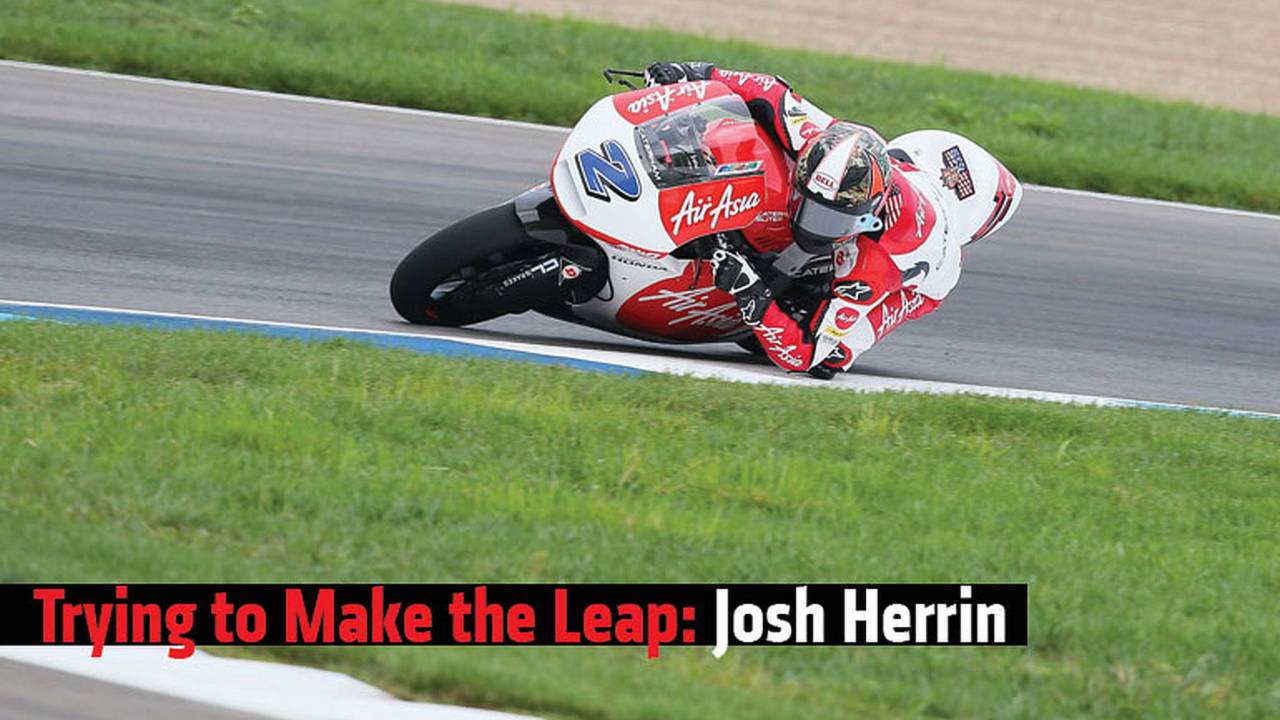 AMA Superbike champion Josh Herrin is in his rookie season in the Moto2 world championship. Can he survive a string of bad luck and adapt to the challenge?

Roadracing is never a fairy tale.

Even when things turn out well in the end, the middle of every rider's ascendance is often filled with heartache and catastrophe. Ben Spies, for example, won the World Superbike championship in his rookie season in 2009, but it wasn't pretty. He dealt with mechanical failures, getting taken out on track, running out of gas and a host of other tribulations. Nicky Hayden's world title hopes in 2006 were infamously almost scuttled by the impertinence of his own teammate at Estoril. And for every Hayden and Spies, there are dozens who never quite make it, often for reasons entirely beyond their control.

For decades, top flight American roadracers have had an abundance of opportunities to rise to the world stage, courtesy of the paths blazed by names like Roberts, Spencer, Rainey and Schwantz. Team principles scouting for talent could look to a thriving domestic series, cherry-pick the best and youngest and count on being able to nurture those talents to their full potential with the ample resources provided by the presence of an American rider.

A series of unfortunate events have widened the gap between rising American stars and the few available rides on the international circuit. First, the motorcycles used in MotoGP changed with the advent of advanced electronics and 800cc bikes. With roots in dirt track racing, the American style of riding used to translate favorably to the demands of riding a GP machine, but the smaller displacement bikes demanded a much more precise approach. At the same time, a global economic crisis crippled the budgets of manufacturers and sponsors, reducing the number of rides available and scuttling some teams entirely. Then the AMA series started to shake itself to pieces, becoming a sputtering, skeletal hulk of what it once was, crippling the chances of rising American stars to display their talent as a precursor to a leap across the pond.

This is the situation in which reigning AMA Superbike champion Josh Herrin finds himself. Having found a way out of the United States and into the Moto2 championship with the Caterham AirAsia squad, he's landed among some of the fastest riders in the world, on their turf, aboard a machine unlike anything he's ever ridden.

But the return to smaller displacement engines doesn't make the adaptation simple. Moto2 machines are prototype chassis wrapped around a spec Honda 600cc engine, making them very different from the production Yamaha R6 Herrin rode in the AMA. Learning the new bike, with new tires, on new tracks is a huge task, one made more complicated by a string of bad luck, a handful of crashes and the first smattering of injuries he's had to contend with in his career.

Herrin crashed out at Qatar and Circuit of the Americas, then broke his collarbone in a training accident, forcing him to miss Argentina and Jerez. He rode cautiously at Le Mans in order to secure his first Moto2 finish, only to crash heavily in the next race at Mugello. Catalunya and Assen were both positive steps, Herrin finishing just outside the points at the former and keeping it together in the rain at the latter. Then his hand was run over in an incident in practice at the German GP, and the resulting injury prompted is premature retirement from the race.

The crashes and injuries have exacerbated what is likely the biggest challenge facing the 24 year old from California: experience. The gap of it between him and most of the rest of the field, on GP machinery and at the tracks they visit, is enormous. Many of his competitors have been racing on prototypes at the European circuits for a decade or more, where Herrin is only seeing most of them for the first time during practice on Friday morning.

Over the summer break, Herrin focused on returning to full fitness, and addressing the shortcomings in his program. He spent much of his time training at the Supermoto track he built in his backyard, turning lap after lap on his Yamaha TTR 125s. One goal, he said, was to focus on riding alone, which would allow him to use time more effectively during qualifying.

Herrin on the gas, in practice at Indianapolis.

Arriving at Indianapolis, Herrin had reason to be optimistic. He was healthy, fit, at a home race and at a track that played to his experience racing on infield courses, even if he hadn't raced at Indianapolis before. A solid result at Indy would be well timed, as contract negotiations for next year are heating up, and will likely start to solidify for Moto2 at the Silverstone round.

"It's gonna take some really good, solid results or some luck to keep this for next year," said Herrin. "I just hope that one of those comes. It'd be nice to stay here, but it's going to take one of those things."

Mark Woodage, Herrin's crew chief, thinks that despite the nightmarish start to the season, Josh has a chance of being back next year, so long as he's seen to continue to progress as a rider.

"He just needs to keep improving," Woodage said. "He's improving all the time, it just takes time. It's the world championship."

To judge that progress sometimes requires close analysis. Despite not getting a clean lap during qualifying at Indy, Herrin's time was just 1.2 seconds off pole. That sort of gap would place him in the top five of an AMA Superbike grid, but in the meatgrinder class that is Moto2, it was only good for 23rd. A few rounds ago at Mugello, the gap to first was 2.2 seconds, so progress is being made.

Unfortunately for Herrin, a change in luck was not to come at his home Gran Prix. He lost the front in qualifying while trying to pass two riders, collecting Xavier Simeon in the process. Both riders were unhurt, but Herrin was deprived of the chance to put in his best hot lap before the session was over, and would start the race from the eighth row of the grid. In the race, Herrin got away cleanly and was making progress through the field, climbing to 16th position. But the race was stopped after a crash in turn 10 involving four riders, which left Mattia Pasini lying in the runoff.

After the race was restarted, another crash in turn two left Herrin with nowhere to go but off the track, where he crashed over Thomas Luthi's fallen bike. Herrin returned with his bike to the pits, but it was too damaged to continue. A bitter pill for the American to swallow at home, and at a crucial point in the season.

The next two GPs at Brno and Silverstone will be critical for Herrin's future, and indeed for the immediate future of Americans in world championship motorcycle racing. If he can back up his improved form with solid results, he may yet be back for a second season, one that will assuredly see him perform closer to the level of talent he is known to possess.