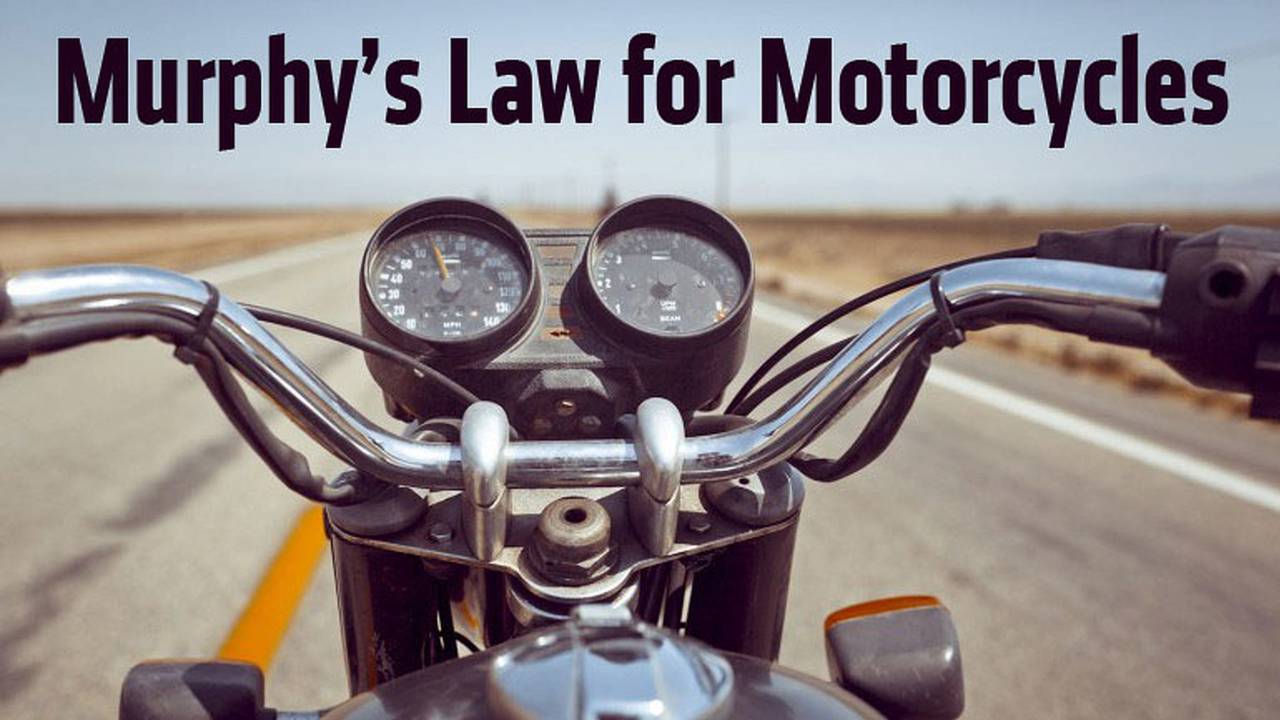 Anything than can go wrong, will go wrong; especially on a motorcycle. Here are 10 examples of how Murphy's Law impacts your motorcycle.

It’s said that anything that can go wrong will go wrong. Known as Murphy’s Law it definitely applies to motorcycles and riding too. Here are some of RideApart’s list of the things that you hope will never happen on a motorcycle but somehow you know that they always will.

Murphy’s Law - Clause 1: It’s a fact of life that a motorcycle cannot fall over without an audience. The odds of a motorcycle falling over are directly proportional to the number of people watching and the rider’s ego. If the motorcycle is new and expensive then the chances of this happening are even greater.

There is a sub-clause to this; the chances of your helmet dropping to the concrete or asphalt is directly linked to how new it is and how much you paid for it.

Murphy’s Law - Clause 2: You’ve just ridden through a thunderstorm. The rain was so heavy that you had to pull over to find somewhere to sit it out. Finally the sun has come out and you and your gear are now dry so you can set off. Five miles down the road it starts to rain again.

There is a sub-clause to this section too; the chances of you riding in the rain is directly related to how accessible your gear is, or if you have remembered to bring it with you in the first place.

Murphy’s Law - Clause 3: If you run out of fuel it doesn’t matter which direction you push your bike, the nearest gas station will always be uphill and in the opposite direction. The odds are increased that all nearby gas stations are closed.

Murphy’s Law - Clause 4: The battery on your bike will die at the exact same time as something else breaks leading you to think for the next two weeks that the two things are somehow connected.

Murphy’s Law - Clause 5: Nothing on this planet is harder to start than a used motorcycle being shown to prospective buyer. This is despite the bike firing up and running like a dream five minutes before the potential purchaser arrived.

Murphy’s Law - Clause 6: You will never have a puncture on the road until you leave the tire repair kit at home in your garage.

Murphy’s Law - Clause 7: The chances of finding a motel or camping spot while out on the road are directly related to how late in the day it is and what the weather is like. If it’s dark and raining you’re going to be riding a long time before you find anything suitable.

Murphy’s Law - Clause 8: You’ve spent weeks in a parking lot practicing how to do a wheelie on your bike. You’ve now got it down to a fine art and know exactly what you are doing. First time you attempt it out on the road you pass the local police officer parked in his cruiser. He also happens to dislike motorcycles.

Murphy’s Law - Clause 9: When your throttle cable snaps it will always happen in the sketchiest part of town. You’ll coast to a halt alongside a group of suspicious looking characters who are at first curious as to what you’re doing on their turf and then would like to charge you for any assistance they offer you.

Murphy’s Law - Clause 10: The one and only part that you really, really need for your motorcycle will be the only item that is on permanent backorder. How long it takes to eventually arrive is also proportional to how badly you want it.

Murphy’s Law is a case of hoping that some of these things will never happen to you but you know deep down that in reality they one day will. It’s not a case of if with Murphy’s Law but more a case of when.

What additions do you have to add to this list?

Lists: 10 Dumbest Things You Can Do On a Bike