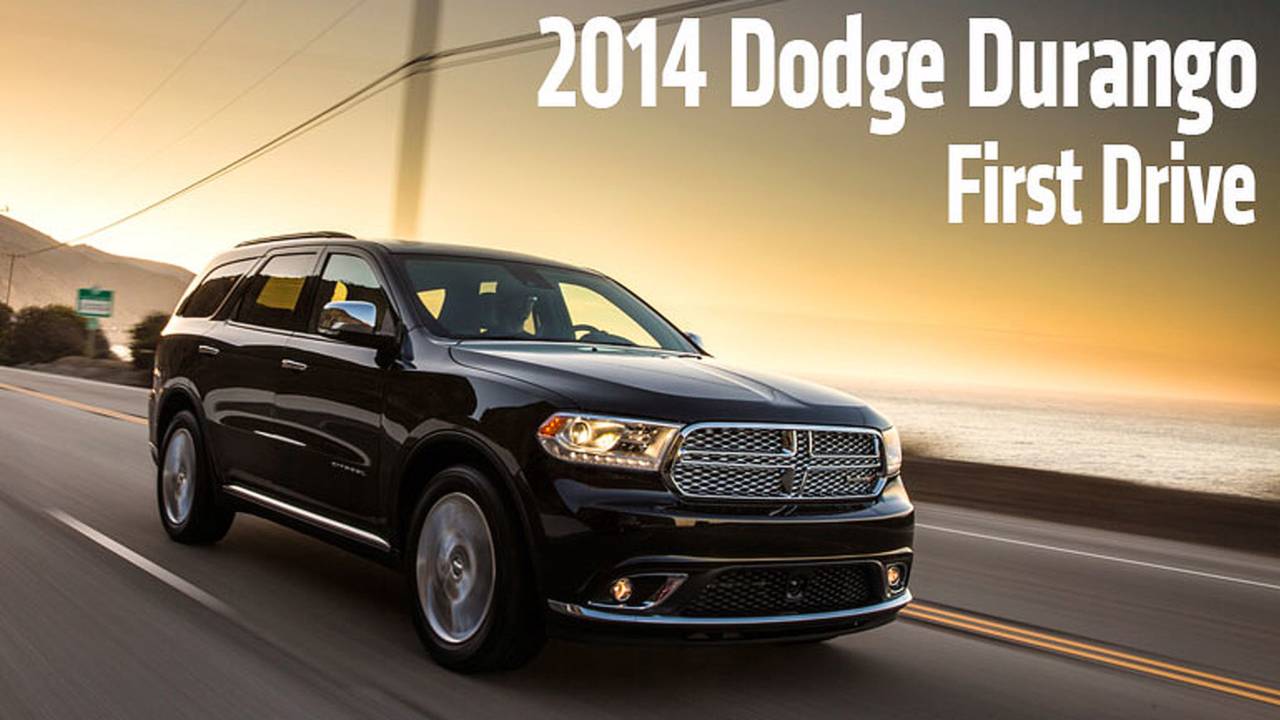 The 2014 Dodge Durango drives like a car and tows like a truck. Did someone say best of both worlds?

If you want to tow with an SUV, your choices are limited: Either a crossover that can only tow the lightest of bikes or a full-size SUV that requires a harbor pilot to park and an oil tanker to fuel it. The Dodge Durango is an excellent compromise: Big and brawny enough to haul bikes and gear, small and agile enough to be useful as a daily driver.

The Durango gets a facelift for 2014, including some slight changes to the front fascia and the nifty "racetrack" loop taillight from the Charger and Dart, plus a handful of interior improvements. The V6 and V8 engines remain the same, but the Durango gets a new 8-speed automatic transmission, designed to improve acceleration and fuel economy.

Towing is one of the Durango's strong suits. V6-powered Durangos can tow 6,200 lbs while V8s can tow up to 7,400 lbs, and a 119.8" wheelbase allows the Durango to comfortably pull trailers up to 22' or so. Those are pretty serious numbers - while many SUVs are limited to flat-bedding a few bikes or ATVs, the Durango can pull a decent-sized travel trailer, and we even found a couple of small, light-weight toy haulers that fit the Durango's towing specs. During our test drive, we had a chance to tow a single-axle Airstream with a V6-powered Durango, and while it wasn't quick - an issue that can be solved by opting for the HEMI V8 engine - it did feel stable and secure.

The Durango is a proper seven-seater, with room (albeit marginal) for two adults in the third row. With the rearmost seats folded down, the Durango offers 47.7 cu.-ft. of space, plenty of space for riding gear - and without the need to leave it out in the open as you would with a pickup truck.

The Durango's standard engine is Chrysler's Pentastar V6, a 3.6 liter unit that delivers 290 horsepower (295 in the Rallye model) and 260 lb.-ft. of torque. Optional is the 5.7 liter HEMI V8, rated at 360 hp and 390 lb-ft of torque. For 2014, both come paired to an 8-speed automatic transmission, which boosts both acceleration and fuel economy compared to last year's 6-speed automatic. Both engines can be had with either rear- or full-time all-wheel-drive, though only V8-powered Durangos offer a locking low-range transfer case for serious off-road duty.

EPA fuel economy estimates for the V6 engine are impressive: 18 mpg city and 25 mpg highway with rear-wheel-drive and 17/24 for all-wheel-drive. The V8's figures are more in line with our expectations: 14/23 with RWD and 14/22 with AWD.

The Durango impressed us on a number of levels. First was the interior: Material quality and comfort is significantly higher than what we've seen on Dodge products these past few years. We drove both an entry-level Durango SXT and a top-of-the-line Durango Citadel, and while we loved the toys in the Citadel - including the UConnect touch-screen stereo/navigation system and an HD-capable rear-seat entertainment system - the SXT impressed us with its alloy wheels and upscale trim. It certainly didn't feel like a base-model SUV.

We also loved the driving experience. Thanks to its unit-body construction, the Durango is lighter than your typical full-size SUV, weighing in at between 4,700 and 5,400 lbs depending on engine and equipment. The Pentastar V6 delivers stronger acceleration than we expected from such a small engine, and the driving dynamics were a pleasant surprise: Big as it is, the Durango hustles through the curves quietly and confidently, more like a car than an SUV. The Durango shares its basic platform with the Mercedes-Benz GL (a holdover from the days when Dodge's parent company Chrysler was owned by Mercedes' parent company Daimler), and it shows: The ride is quiet and comfortable and the Durango is much easier to maneuver and park than full-size SUVs like the Chevy Tahoe and Ford Expedition.

Third-row seat is smaller than other full-size SUVs

Dodge has a less-than-stellar reputation for quality

Durango pricing starts at $30,790 for the SXT model, which comes with handsome alloy wheels, fog lights, and enough chrome trim to belie its (relatively) inexpensive price. From there, the model lineup diverges: You can add equipment with the $32,490 SXT Plus and $36,990 Limited, or you can go the hot-rod route with the $39,990 Durango R/T. The top-of-the-line Citadel runs $41,990, and can be optioned up to nearly $55,000. SXT and SXT Plus models offer only the V6 engine, the R/T comes exclusively with the V8, and the Limited and Citadel offer both engines. An intriguing addition is the Rallye model (actually a $1,495 option on the SXT Plus). It provides the aggressive look of the R/T model with the fuel-efficient V6 engine, which gets a 5-horsepower bump as an added bonus.

As you can tell, we liked the Durango: It blends the towing and hauling abilities of a full-size truck with the comfort and easy handling of a crossover SUV. And unlike most compromises, this one seems apt at just about everything: It tows competently, rides comfortably, and handles surprisingly well. As an added bonus, the refinement, interior quality, and fit and finish are leagues beyond what we've come to expect from Chrysler products.

8 out of 10. We love the way it drives and tows, but long-term quality and durability has yet to be proven, as Chrysler doesn't have the best track record.

What do you think of the Durango - would you trust it to do the job of a full-size pickup? Share your comments below.