The California Office of Traffic Safety has released the 2013 update to its 2012 lane sharing survey. The 2013 survey was again conducted by Ewald & Wasserman Research Consultants, using a similar methodology to the 2012 survey. The researchers surveyed a greater number of riders and drivers – 713 riders, compared to 560 in 2012, and 1,020 drivers, compared to 733 in 2012. Check out the first few pages of the survey below for the rest of the methodology – let’s get to the good stuff!

This article originally appeared on Lane Splitting is Legal and is reprinted here with permission. Follow LSiL for complete coverage of lane splitting issues.

The study shows a slight increase in riders splitting on freeways: 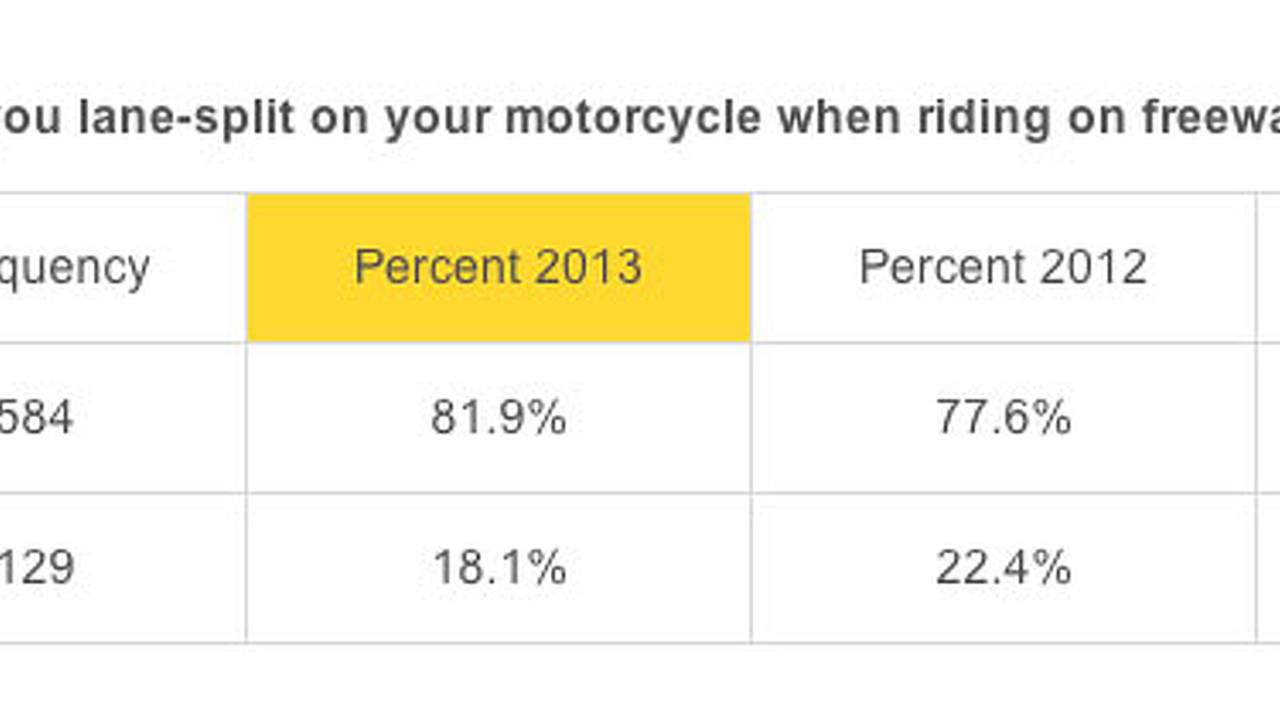 And more riders answered “How frequently do you lane-split on freeways?” with “always”: 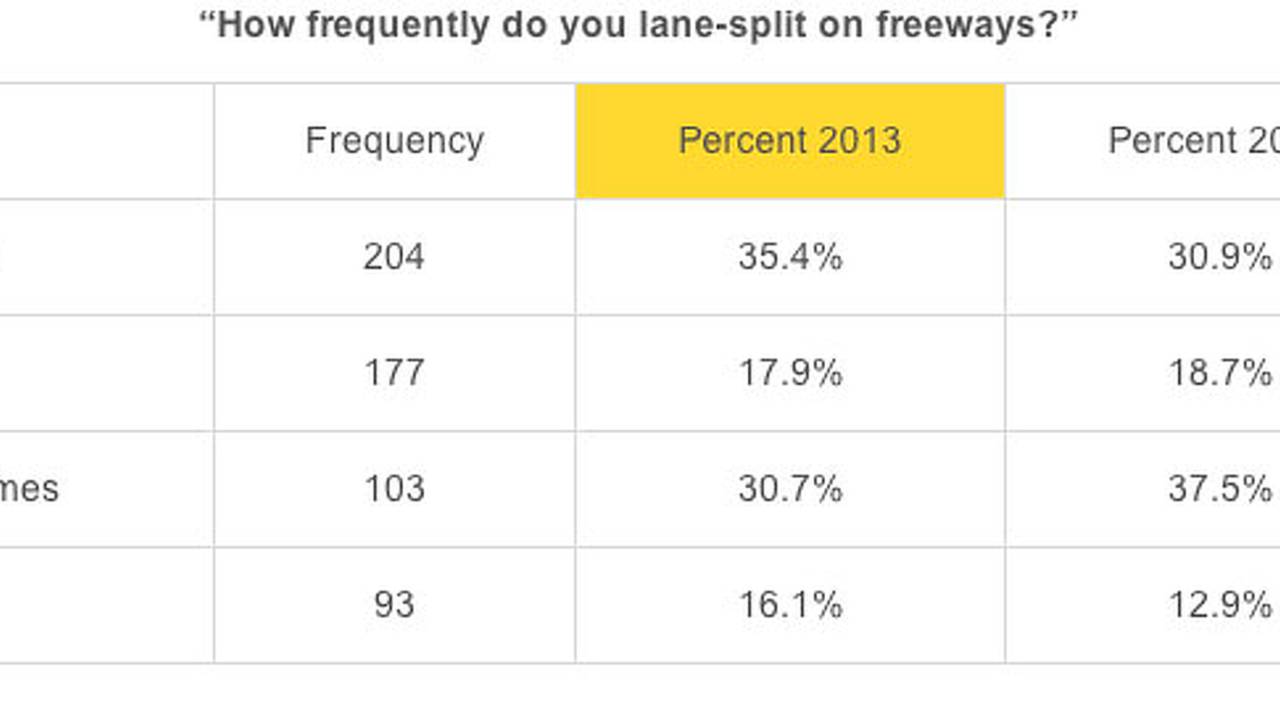 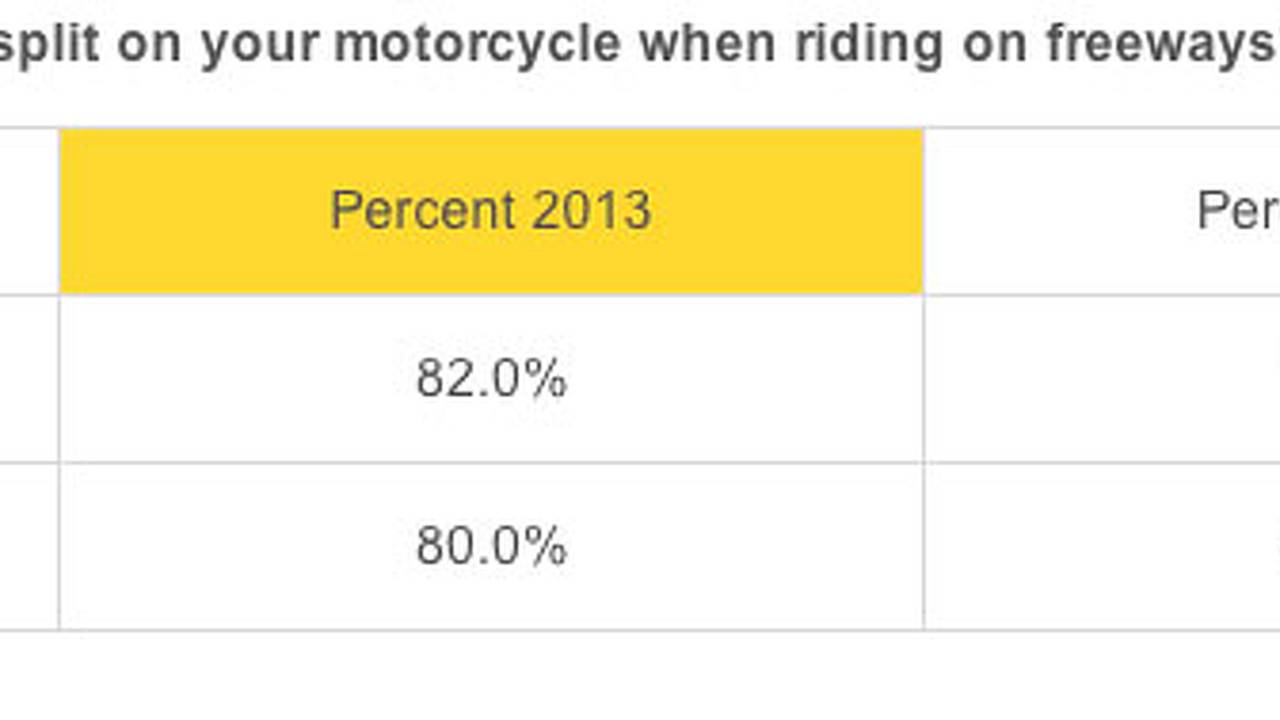 There’s some good news about riders being hit or nearly hit, too. Fewer riders reported being hit by vehicle, although the number riders hitting other vehicles increased a bit. Bad! But the overall “never been hit” percentage is up. 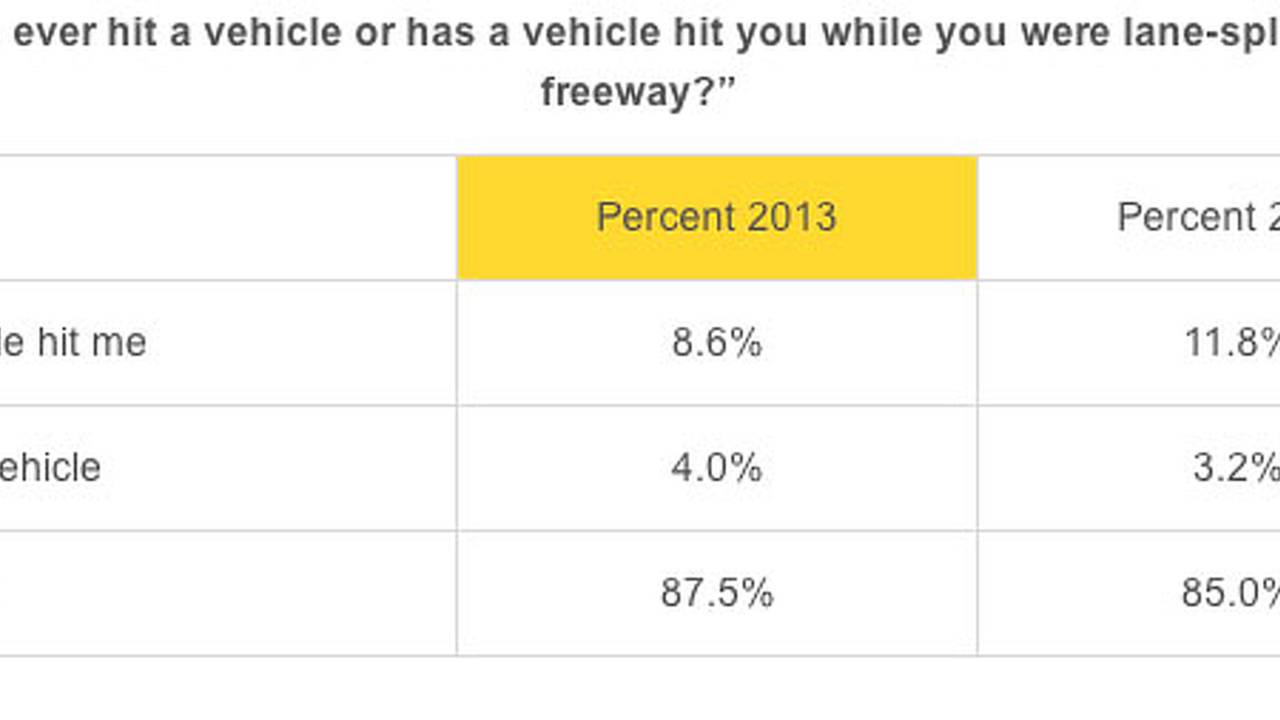 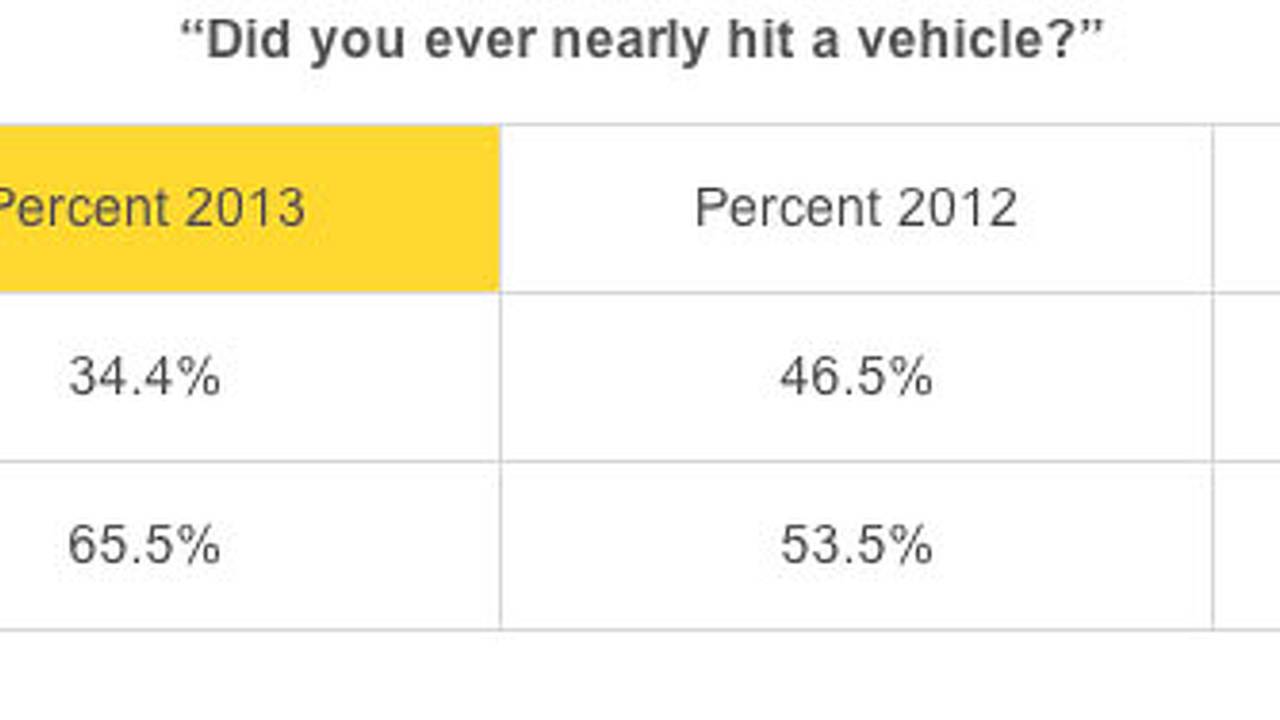 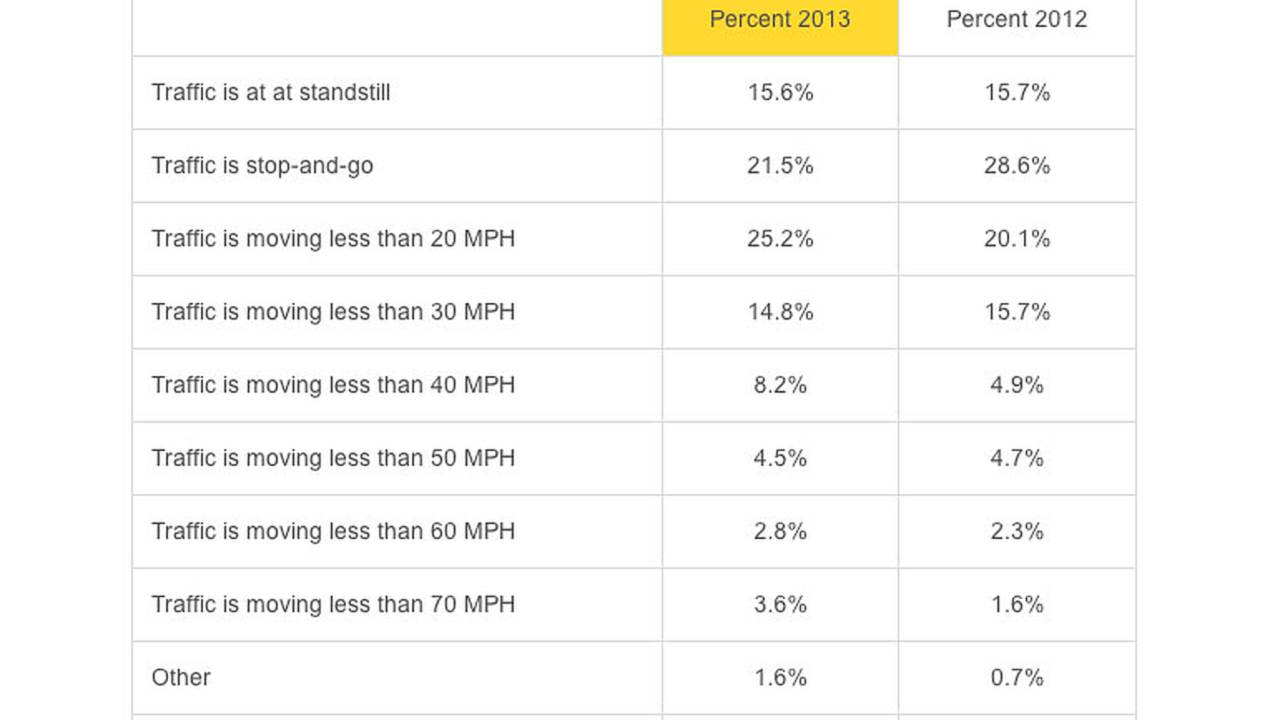 There were not a lot of changes in the answers to questions regarinding splitting on roads other than freeways. As with splitting on freeways, the number of close calls decreased – 76.7% of riders answered “Did you ever nearly hit a vehicle?” with no, compared to 70.3% in 2012.

In reported collissions, mirror hits off the freeway increased from 20% to 31.6% and a lot more riders were knocked down – 13.2% in 2013 versus 2.9% in 2012. However, the researches noted that even this seemingly large change was not statistically significant.

The survey contains extensive data on riders’ speed relative to surrounding traffic – see tables and notes starting on page 17. The researchers calculated average speed differential for road types as shown in the table below, and not surprisingly found that riders who split on freeways and roads tend to split more quickly. 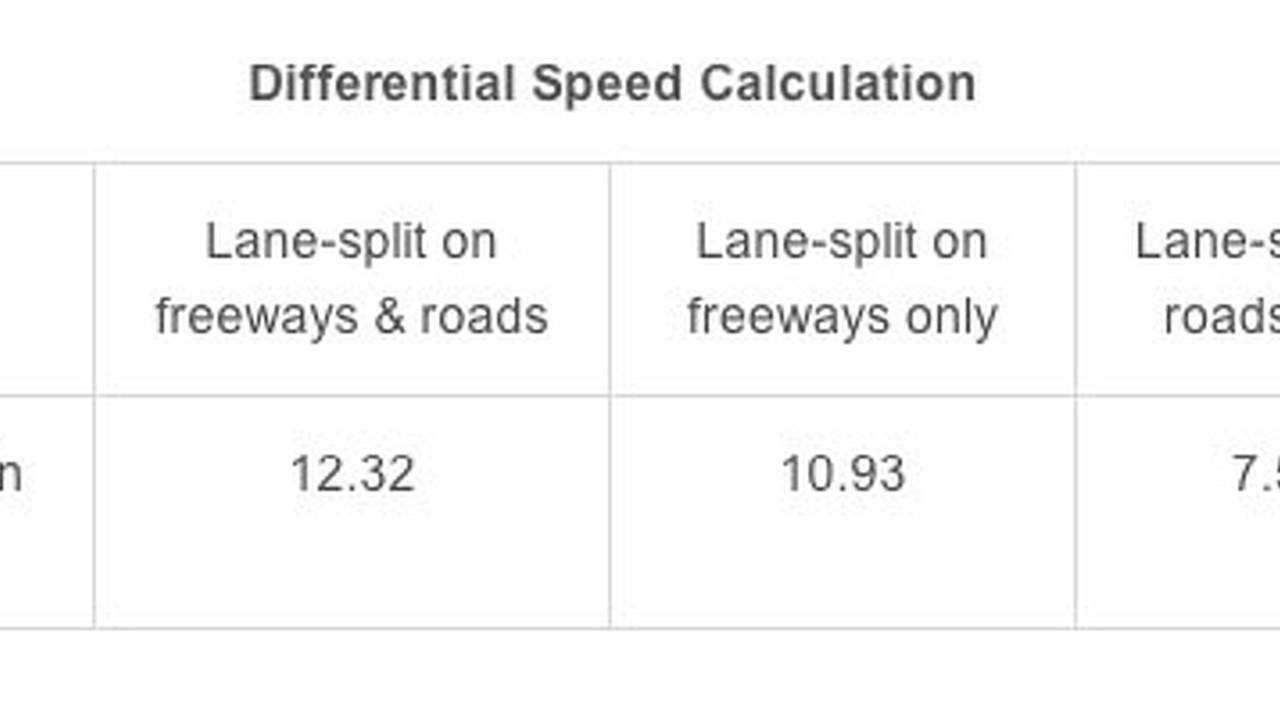 One of the most common things riders complain about when talking about lane splitting is drivers not paying attention and not seeing motorcyclists. The most common complaint tallied up in this survey was “drivers not looking in mirror/drivers not seeing MCs” – reflective of this complain. The table below shows the breakdown of threats perceived by riders: 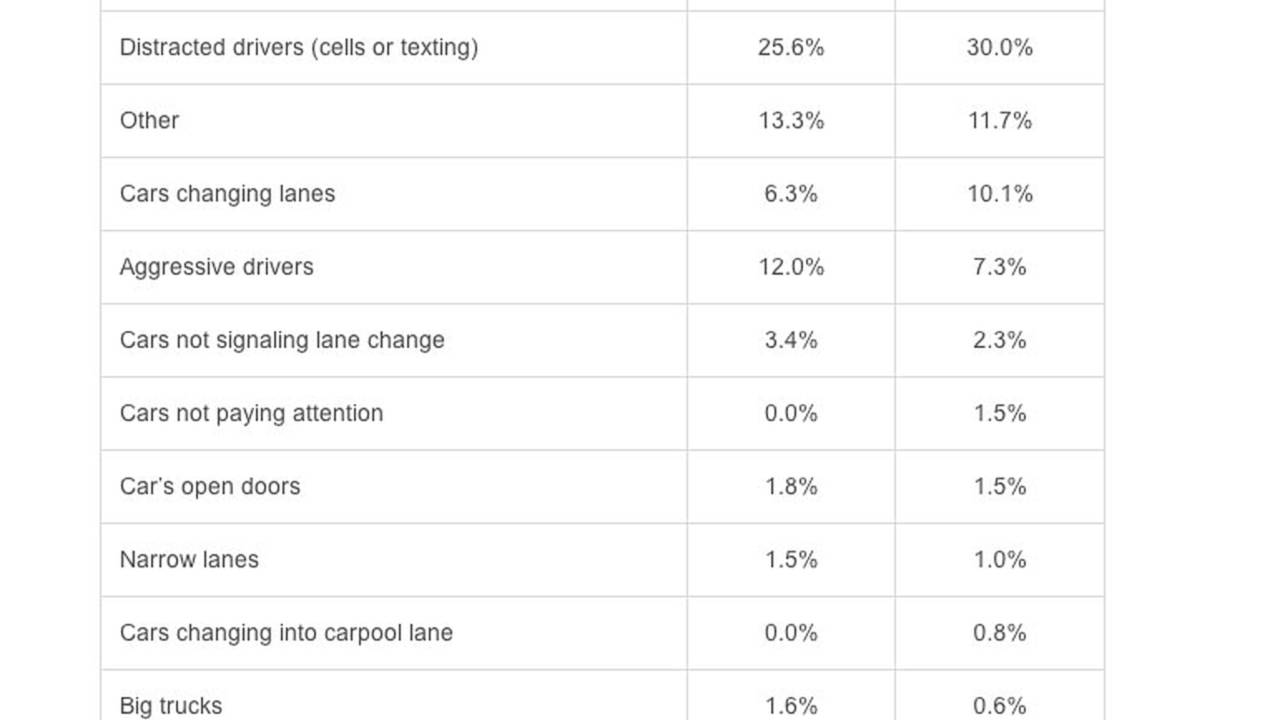 The researchers characterized the changes in the 2013 threat perception numbers as insignificant, saying “The small changes in the perception of most serious threat to motorcyclists between 2013 and 2012 are not significant.” One glaring issue here is that few riders perceive “big trucks” as a significant threat, while in reality the data shows these large vehicles as being positively murderous to lane splitters.

In summary – most of the changes in the rider data from 2012 to 2013 was characterized by researchers as not statistically significant.

Ok – so what about the drivers?

The question many riders have been asking is “Has all of the PR work the CHP and OTS have been doing made a difference in driver perception of lane splitting?”

My contact at OTS said “At the time of the survey (March/April 2013), there had been very little outreach to the public regarding the Lane Splitting General Guidelines, which had just been posted on CHP’s website on January 14, 2013, OTS’ website on January 30 and DMV’s website on March 8th. We hope to see more positive change when the survey is conducted again next Spring.”

The survey contains several tables detailing responses by number of days driven per week, age, and so on… but here’s the breakdown of how many drivers think it’s legal to split lanes on the freeway in California: 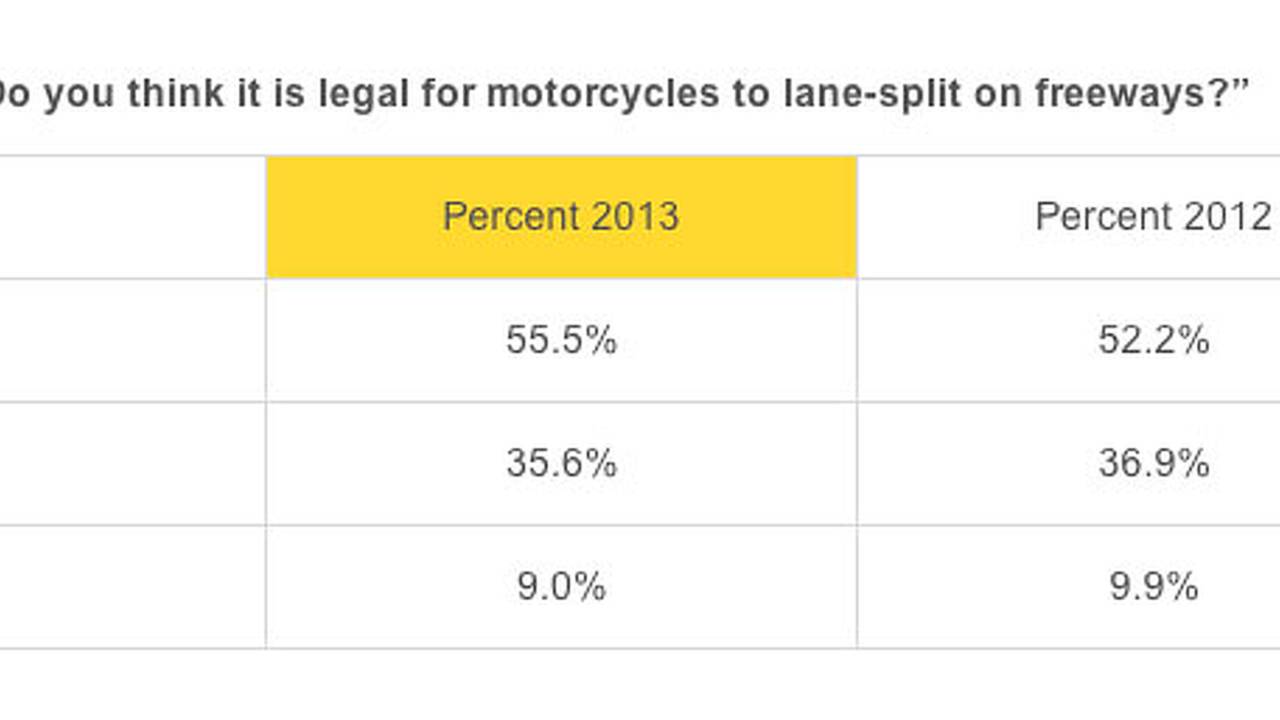 The researchers characterized these small changes as statistically insignificant. Check out the tables starting on page 22 for more information on perceived legality by drivers.

There was a bit of a reduction in the number of driver-reported lane splitting accidents, although the number of observations is small. 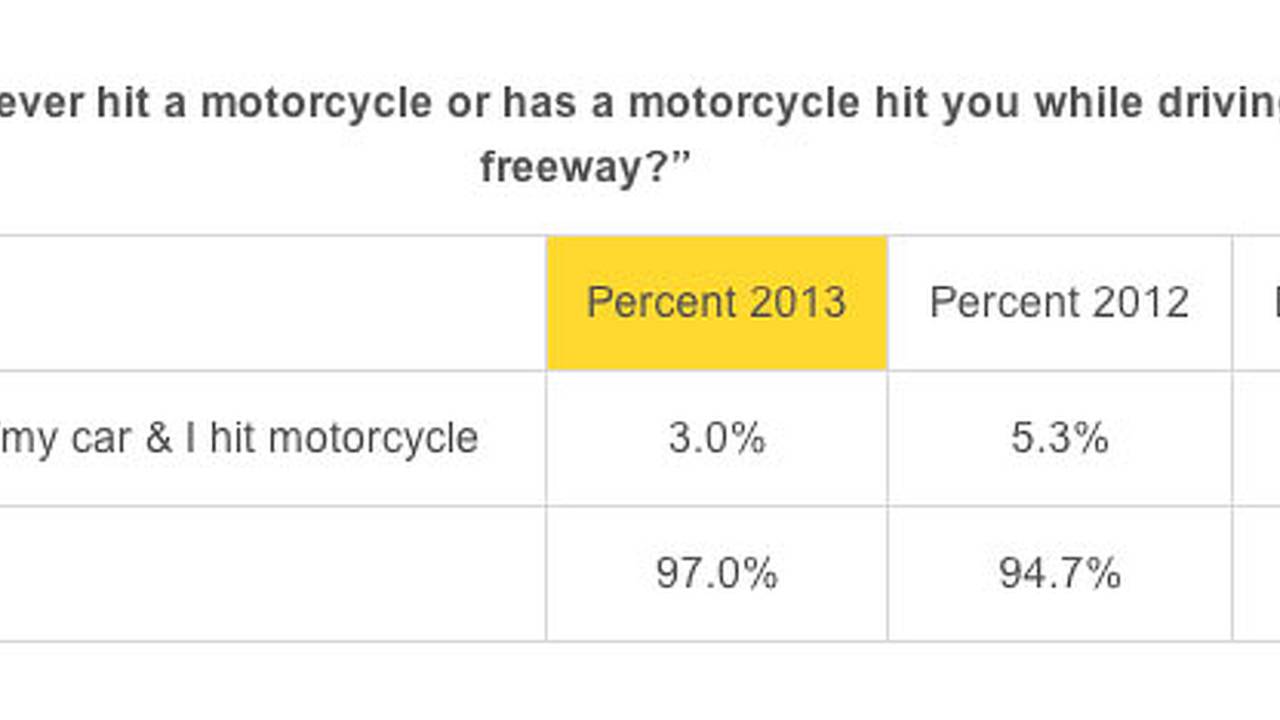 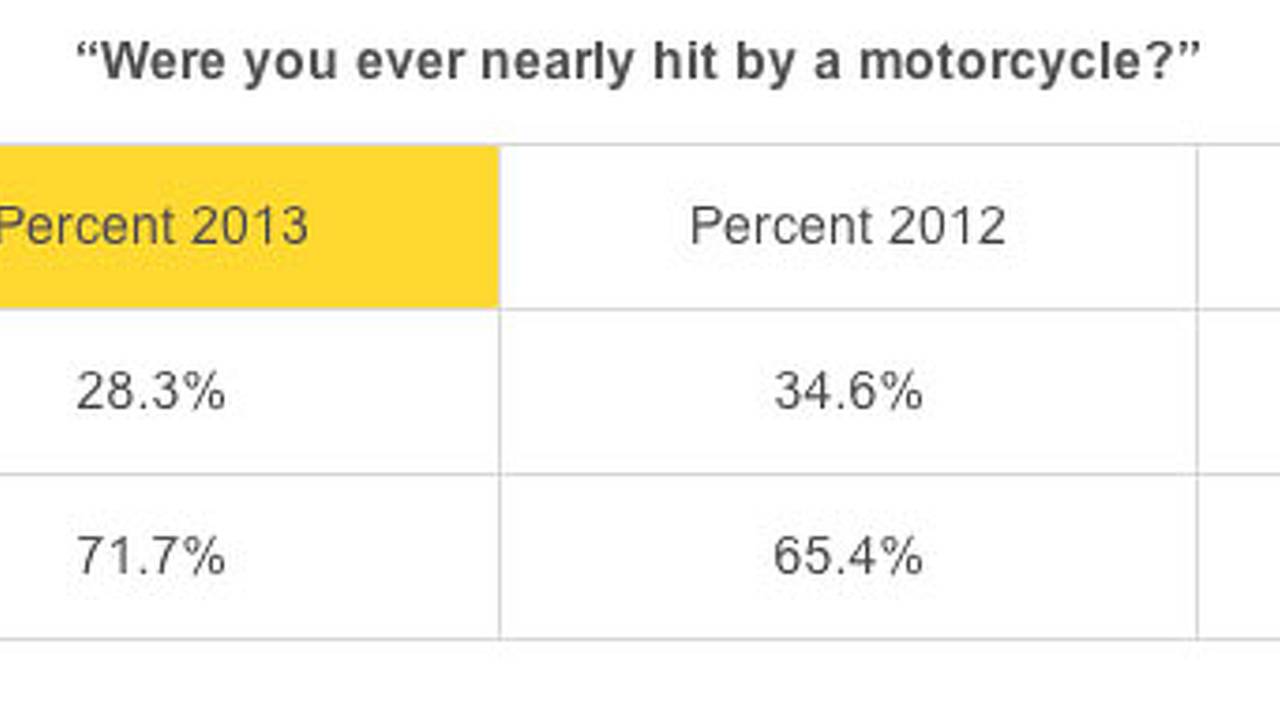 Driver Approval and disapproval of lane splitting didn’t change much: 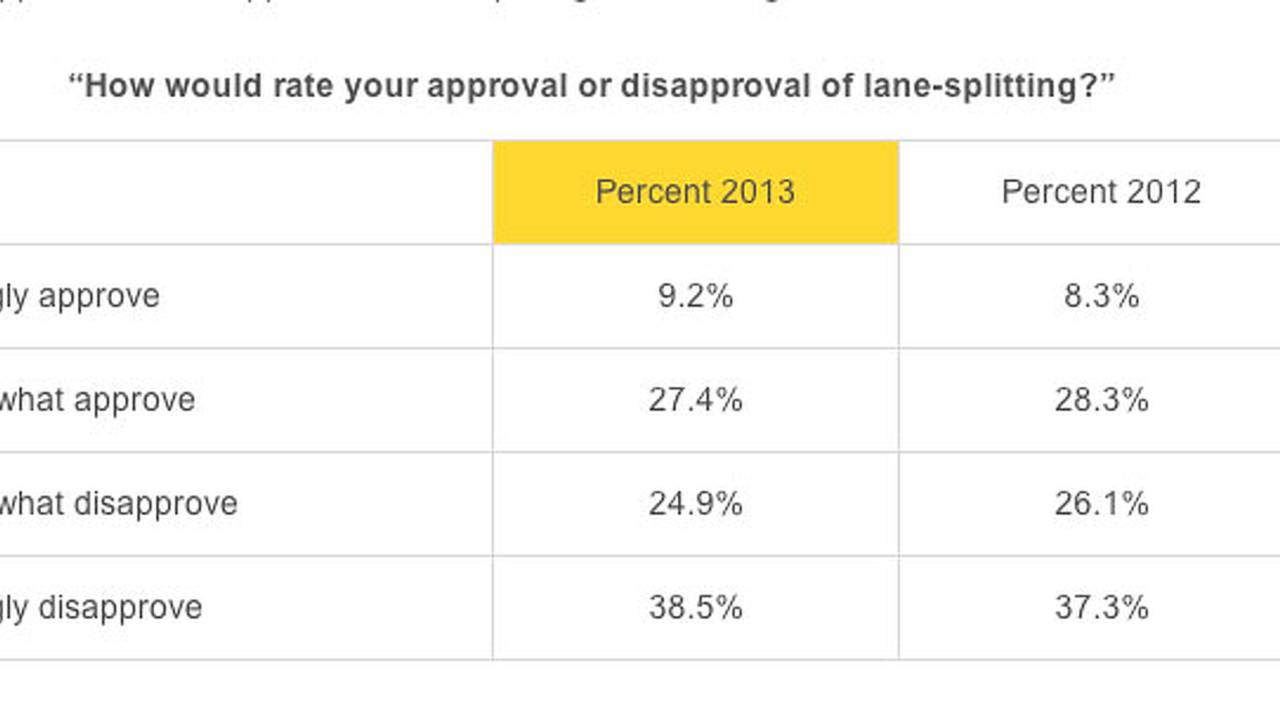 Table V23 on page 29 breaks down driver reasons for approval/disapproval. The most significant reason for disapproval is “it is unsafe” at 57.5% followed by things like “it startles me” and “it might cause me (or others) to have an accident.” Surprisingly, complaints that seem common when lane splitting is mentioned in the media, such as “they ride too fast” and “it’s unfair” don’t carry much weight here. The tables beginning on page 30 display comprehensive breakdowns of perception of legality, approval/disapproval and regional opinions. 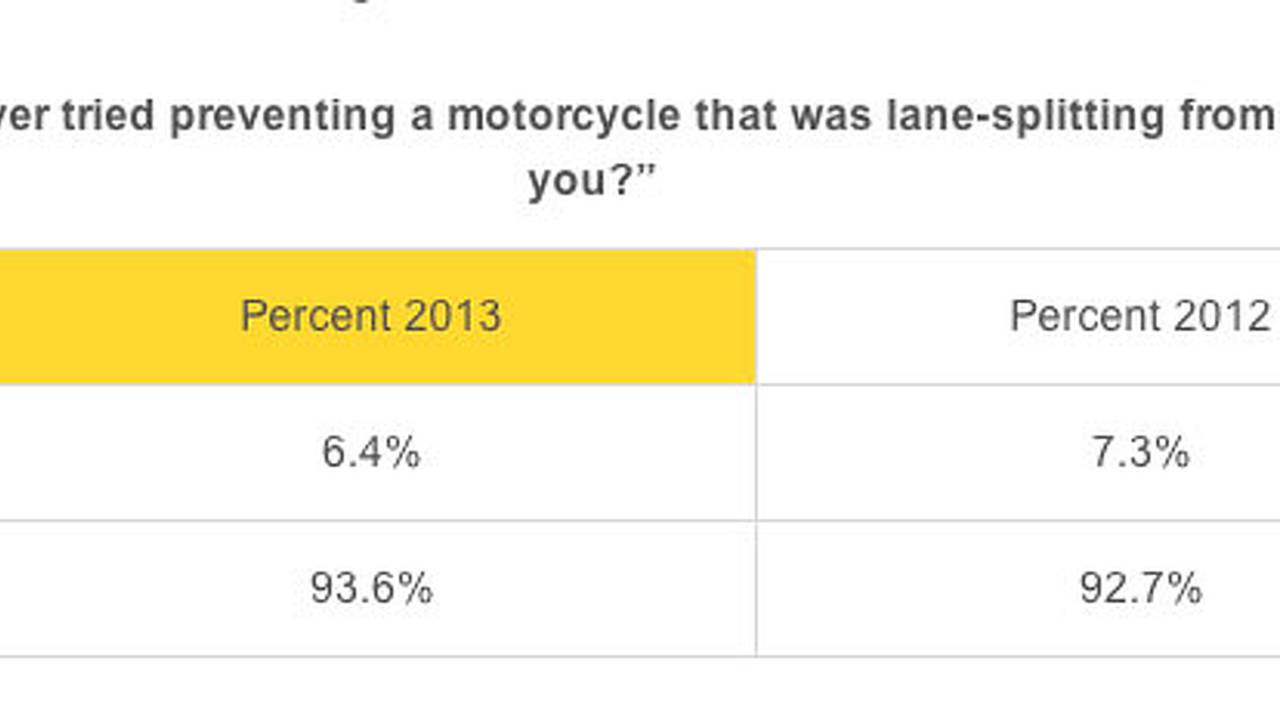 In summary there isn’t a lot of good news here – it’s mostly neutral, with not a lot of statistically significant changes in the data. As mentioned above, the official PR engines of the CHP, OTS and DMV were just getting going as this survey was being conducted – hopefully we’ll see more positive results in the 2014 survey. In the meantime, riders should read the entire study and work to be good ambassadors for lane splitting and motorcycling in general. Please share this study with riders and drivers alike!

This article first appeared on Lane Splitting Is Legal and is reprinted here with permission. Follow LSiL to keep up to date on all lane splitting news.

By: Surj Gish
++
Got a tip for us? Email: tips@rideapart.com