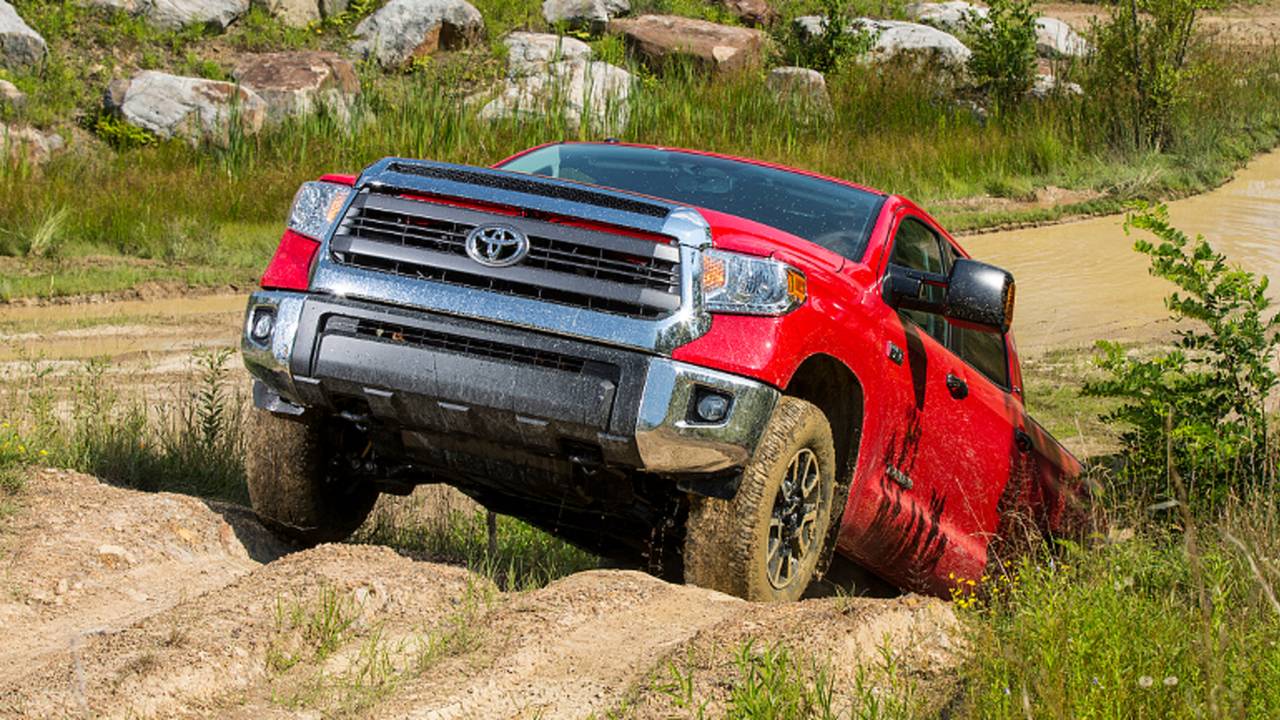 Can the 2014 Toyota Tundra tow and haul?

The 2014 Toyota Tundra has been redesigned, both inside and out, in the first major update since a 2nd generation model was launched way back in 2007. The exterior has been re-styled, with each trim level receiving its own distinctive look - a look that goes beyond just the badging. There is also a new and easier to lower and lift tailgate. The interior of the Tundra has also been updated and upgraded. Performance wise, several suspension enhancements have been made to improve both the handling and ride quality of the new Tundra. To top it off, Toyota has included many of the convenience features formerly found in the higher end models across the entire range.

We really like Toyota's attention to detail. Toyota spent a lot of time reworking the Tundra with their owners in mind and worked to improve upon what their feedback. Toyota improved the towing package, upgraded the cooling and electrical systems to handle a much more heavy duty battery and alternator. Toyota's aim was to create new truck that was not only capable of pulling the weight, but capable of pulling that weight for the life of the truck without fail.

Toyota has a proven package with the Tundra, especially with their bulletproof engine and powertrain, so DriveApart was happy to see that Toyota wasn't just resting on their accolades but were listening to the people who used their products to make them that much better.

There isn't the same cylinder de-activation system as some of the competitors and, for a full size truck, the fact there is no diesel option is a big miss. Also, some of the styling elements, particularly on the higher-end trim levels seemed a tad over-styled. That said, with design, there will be as many different opinions as the people who think them.

When equipped with the Tow Package, which we feel is a must have option, the Tundra has a maximum towing capacity of 10,400 pounds, which is enough to haul pretty much whatever you throw at it. The tow package includes a one-piece towing receiver that is installed into the frame before the bed installation, some tow package-only rear springs, upgraded cooling and electrical systems and a heavy duty battery and alternator. The seven and four pin towing hitch connectors sit above the hitch to help avoid any damage from high departure angle driving. Toyota also moved the electrical connector for the tow hitch up next to the license plate so that the light from the license plate shines on it and makes it easier to operate in the dark.

The tow package also brings a TOW/HAUL shift mode to adjust the throttle sensitivity and transmission shift control while favoring lower gears when accelerating or decelerating, as well as Trailer Sway Control to help counteract the handling forces applied to the truck by the trailer.

The Tundra is the only full size truck to adopt and become compliant with the SAE J2807 towing standard.

The new Tundra is great to drive and once you're behind the wheel, you'll notice the drive is night and day from the previous generation. We tested out the various models in a wide range of activities, from towing to off-roading to road driving around the countryside and the Tundra came up aces across the spectrum. That said, if you plan on towing a lot, the 5.7-liter V-8 engine with 381 horsepower and 401 lb.-ft. of peak torque with is a must, as the Tundra needs the extra power. The 4.6 liter V-8 engine that produces 310 horsepower and 327 lb.-ft. of torque felt a little more responsive to minute inputs to the gas peddle, yet still had plenty of power to load the truck bed down every day and take to work.

The four-wheel disc brakes are two 13.9 inch by 1.26 inch ventilated rotors with four piston calipers in front and 13.6 inch by 0.71 inch two piston calipers in the rear. The Tundra comes with ABS, Electronic Brake Force Distribution and Brake Assist across the Tundra line up.

The 2014 Toyota Tundra is available with three different engine configurations. A 4.0 liter Dual Overhead Cam V6 and is offered in the Regular and Double Cab models. The 4.0 liter produces 270 horsepower and 278lb-ft of torque and is mated to a 5-speed automatic transmission with a nifty uphill/downhill shift logic. It has an EPA estimated fuel economy of 16mpg city, 20mpg highway and 17mpg combined.

The final option is the king of the hill the 5.7 liter, DOHC i-Force V8 engine. It produces 381 horsepower and 401lb-ft of torque and is is offered in both gasoline and “flex-fuel” variants and is paired with the same 6-speed electronically controlled automatic transmission as the other 4.6 liter. The 5.7 liter received an EPA estimated fuel economy of 13mpg city, 18mpg highway, and 16mpg combined for the 4x2 and 13mpg city, 17mpg highway, 15mpg combined fuel economy for the 4x4.

All Tundra engines feature an aluminum cylinder block and DOHC heads along with Dual Variable Valve Timing with intelligence for a broad torque curve and optimized efficiency.

You know what's interesting? The fact the Tundra is very much an American truck and it has more American/Canadian made parts than any other full size truck on the market (Source: NHTSA via American Automobile Labeling Act – AALA). From its design in Newport Beach, California to the Alabama-built engines to the North Carolina-sourced transmissions and, finally, to the assembly plant in San Antonio, Texas, the Tundra is basically as American it can be.

We also thought the different trim level options was a great feature. One thing that really drives consumers crazy is when a company releases a new model only to trick out the expensive versions and exclude things that make sense like power windows, air conditioning or a must have, an auxiliary audio input from the lower version. With the new full size Tundra, even the base model should feel upscale. So while the base models may not include Navigation, they do offer a nice touch screen and include things like Bluetooth connectivity and a backup camera standard.

Toyota also included a neat little system that opens the tailgate gently, so you don't suffer from rear gate slam down syndrome. Toyota also made the rear bumper out of three pieces so, should you or your 16 year old kid back the truck into something, it's easier and way less expensive to replace.

The 2014 Toyota Tundra is the first truck to offer backup camera across all trims and is the only full size truck with available Blind Spot Monitoring with Rear Cross Traffic Alert.

The SR5 is the entry level truck, which Toyota calls “professional” themed. It comes standard with daytime running lights, fog lights, 18” alloy wheels, single zone air conditioning, granulated paint on the center cluster and unique seat stitching on the 40/20/40 split fold down front bench seat and power windows. Every Tundra comes with the same safety features across the line, with the SR5 losing the parking assist sonar system. The SR5 has a matte black lower front bumper with chrome end caps and a matte black grille.

The Platinum and 1794 edition Tundras are presented as comparable models with different styling. They both come with all features of the lower range models while also including a power tilt/slide moonroof with sunshade, perforated and leather trimmed/heated and ventilated seats, a front and rear parking assist sonar as well as upgraded interior materials. Also, there is a standard Entune Premium Sound System with JBL audio. The Platinum Tundra has a color coordinated front bumper and silver billet grille with color keyed grille surround and the 1794 has a silver lower front bumper with chrome end caps and a silver grille with chrome grille surround.

Toyota hasn't released pricing yet but the company did emphasize pricing would be competitive to last year's model. Toyota also stressed they were going to minimize the pricing gaps between the various trim levels as well.

The 2014 Toyota Tundra is a beautiful truck to look at, comes loaded with a ton of standard features and is capable of tackling pretty much any and every job you could throw at it. Toyota has done a great job of upping the grade of craftsmanship of the Tundra over the previous generation in terms of build quality and ride. Toyota also significantly improved upon the Tundra's performance, which was already near the top in the full size truck class.

The 2014 Tundra presents a compelling and fun to drive choice in a really competitive truck market and we think the likes of Ford, Chevrolet and Dodge will lose some sleep when the Tundra launches in the fall. The Tundra is a must shop and a DriveApart best in class choice.