Me, A Motorcycle, And A Bajillion Dollar Jackpot 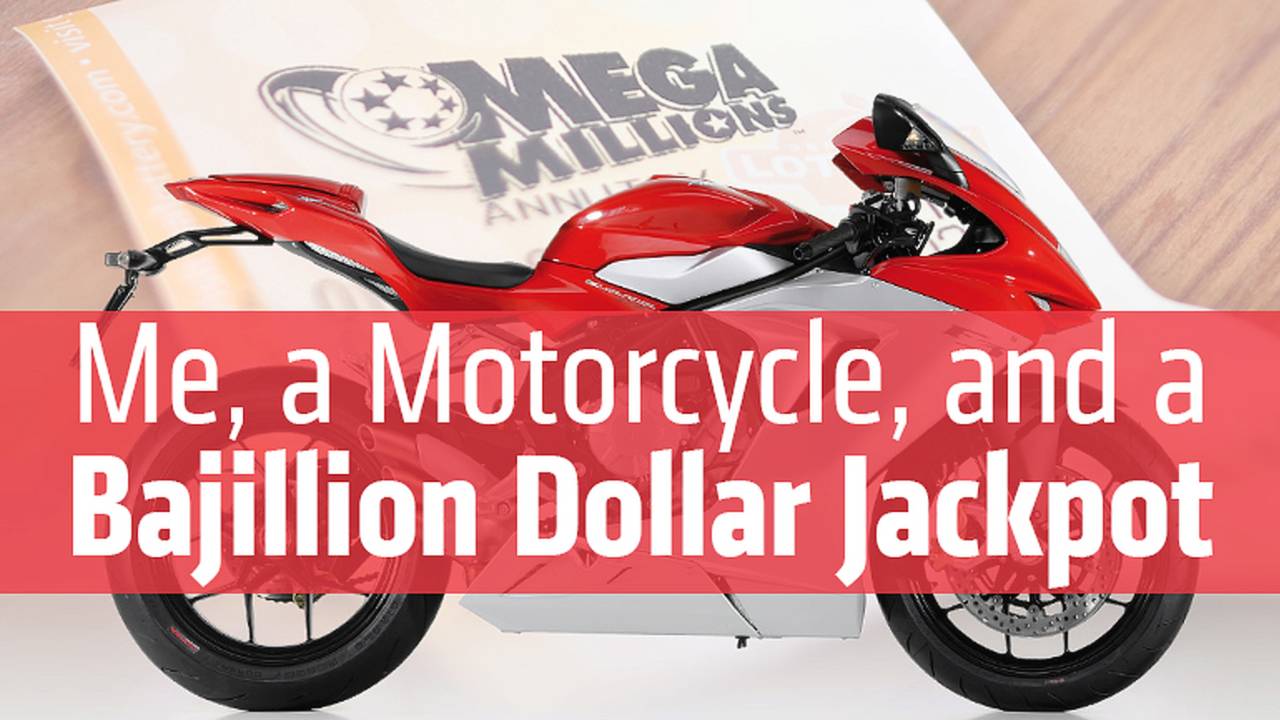 How my motorcycling would change if I won a MegaMillions lottery jackpot.

Despite the fact that I forgot to buy the winning MegaMillions Lottery ticket before leaving town last week, the hours I spent on trains, planes and automobiles gave me plenty of time to think about what I’d do with the loot if I won. Sure, the usual sensible stuff would come first: pay off bills, pay off the parents’ bills, etc., but winning that kind of jackpot, roughly a bajillion dollars before taxes, offers fertile ground for the imagination of anyone staring out across the clouds at 30,000 feet. Especially if you’re into motorcycles.

First thing I’d buy is more. Heather’s Law of Varietal Moto Motion states that no one motorcycle can satisfy the needs of any motorcyclist with the financial ability to diversify. I.e., one is not enough. You don’t want to go tempting the laws of physics any more than you already do, right? Now that I’m loaded (in my fantasy), I want an MV Agusta F3 675 Serie Oro (about $30,000, if I can find one), hands-down the most beautiful production motorcycle ever. I’ll need this for twisty rides on sunny days. Also to return RedBox movies at Walgreens.

Of course, I’ll have to have the mile of dirt road to my house paved. I have no idea how much that will cost, but even if it’s a lot, a bajillion minus a lot is still a bajillion.

No doubt the paparazzi will be following me by helicopter, what with me being a bajillionaire and all. MV Agusta CEO Giovanni Castiglioni, hands-down the most beautiful man known to production motorcycles, will want to show me personally what it can do. It’ll be good PR.

We can ride from the factory in Milan up to Lake Como to have lunch with George Clooney so I can ask him about that satellite of his. I want one to track epic rides across the globe because I’m sick of getting messed about by Google Maps. According to an article in Wired Magazine, you can get (and launch) one of these babies for about eight grand. And according to a buyer interviewed by Wired:

“$8,000? That’s just the price of a cool midlife crisis. You could buy a motorcycle or you could launch a satellite. What would you rather do?”

Yes; somebody actually said that. Guess you know how I’d answer.

Since I’ll have the world’s coolest piece of equipment for adventure-touring, I’ll definitely want the right bike: a brand new BMW R 1200 GS (with the low seat option, for sure). I’ll also want waterproof hardbags (to keep my jammies dry when splashing across rivers), a full tinted wind-screen (to deflect sand in the Gobi desert), and heated grips (why push the boundaries of human existence with frozen fingers?). That will run me about twenty-five large.

I don’t know where else I’d go just yet, but anywhere-I-please is definitely on the list. As is that GP fantasy tour I’ve been dreaming of, where I fly into Nice, pick up a Ducati Monster 796 at the airport, ride up through the lavender scented South of France, North to LeMans, where I’ll watch the French Grand Prix, then head back down to Monaco for the Formula One Grand race the next weekend - from my yacht in the harbor, of course.

After all this travel, I’ll want to do something real, like start that non-profit I’ve always dreamed of: The RevGirl Academy; a week-long camp for women in need that focuses on motorcycle riding, self-defense, self-reliance, and self-esteem. I’ll need a fleet of Honda CBR250Rs, perhaps the most confidence-inspiring motorcycle on the road right now, and a support staff, including MSF instructors, a mechanic, Navy seals (to teach the self-defense stuff), a chef, and someone to design the t-shirts that say “RevGirl Grad. Go ahead, make my day”.

Right about now I’m told to make sure my seatback and tray table are in their full upright and locked positions, and so my fantasy moto-spending spree is over. There are infinite ways to spend lottery dollars. Now that you’re thinking about it, if you are the lucky bloke who wins the next big one, how will you spend it?