First there was the Wraith, then the CNG-powered Magnolia Special roadster. Now there’s this Bienville Legacy project, the culmination of everything JT Nesbitt knows about motorcycle design and a complete re-think of suspension, man/machine interaction and the American superbike. It uses a single, centrally-mounted carbon fiber leaf spring for both the front and rear suspension. ...

First there was the Wraith, then the CNG-powered Magnolia Special roadster. Now there’s this Bienville Legacy project, the culmination of everything JT Nesbitt knows about motorcycle design and a complete re-think of suspension, man/machine interaction and the American superbike. It uses a single, centrally-mounted carbon fiber leaf spring for both the front and rear suspension.

“This is the product of seven years spent on an island,” JT told us this morning. After Katrina, the New Orleans-based designer entered a period of self-imposed exile. He did some drinking, some Bonneville racing, hung out with us a lot, bought a Bimota, made fun of Indian and generally didn’t engage too much with the outside world. Now, thanks to Jim Jacoby’s American Design and Master Craft Initiative, JT is back to building bikes.

“The legacy answers all the questions the Wraith asked,” begins JT. The Motus KMV4-powered prototype will weigh less than 400lbs and, equipped with a supercharger, make more than 300bhp. Like the Wraith, the Legacy is equipped with carbon girder forks. Just here, those girders are identical front and rear (enabling identical brake discs, calipers and wheels front and rear) and are sprung by that central leaf spring. That massively reduces parts count and unsprung weight while increasing the service life of suspension components.

The adaptation of seemingly out-dated ideas into fresh new ones doesn’t stop there either. In place of a conventional modern motorcycle’s foam/vinyl seat, there’s instead a horse-style leather saddle, individually tailored to each owner. Why? “On a single motorcycle, one may encounter: vinyl of the seat, painted plastic of bodywork, aluminum of the chassis, and painted steel of the gas tank, with huge gaps in between each material transition. And that is just in the seating area! The ‘saddle’ of the Bienville Project, just as the saddle of a horse, will encourage the free exchange of information from man to machine and back again, while still providing room for athleticism (rider movement).”

That saddle, along with the longitudinal V4, girder forks/swingarm, hand-formed fenders and general old worldness creates something of a bizarre aesthetic. “Motorcycles are sold primarily based on looks, specifically the way they look on a showroom floor without a person astride,” explains JT. “Who ever heard of a motorcycle showroom with a mirror so that you can look at yourself while you ‘try it on’? A silly thought, but the observation that, ironically, motorcycles are sold while standing still is not invalid.” 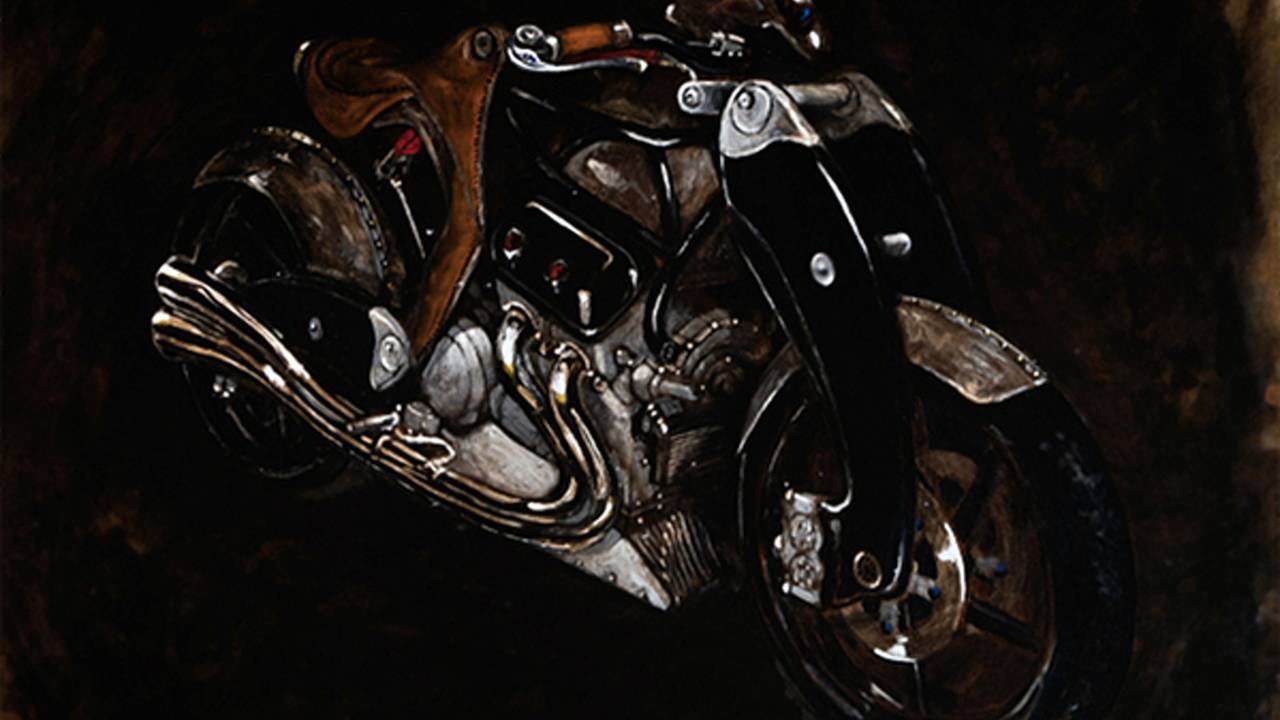 “The thought then, is that the machine is incomplete until the human element is ‘snapped’ into place. Even the most expensive bespoke suit is nothing but a pile of cloth until it is worn, and like that suit, each saddle will be custom tailored for the individual owner. Whilst a perplexing object to behold on the sidestand, once in motion with a person astride, the visual incongruence is resolved. Francis Bacon once said, ‘There is no excellent beauty that hath not some strangeness in the proportion.’”

The Bienville Legacy project is being partially funded through Kickstarter. The photo gallery can be viewed here.