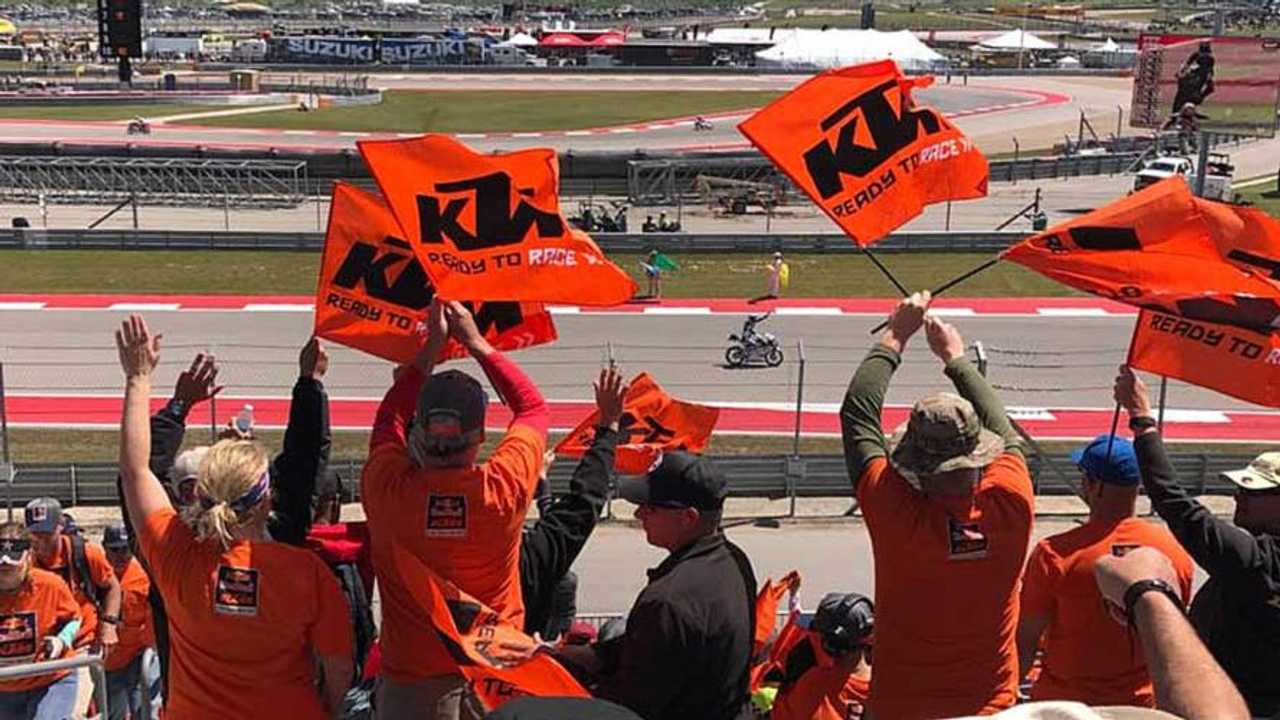 A Fan Perspective: Watching the United States Red Bull MotoGP at Circuit of the Americas. This is big fun in the state of Texas.

Fan Perspective: MotoGP at Circuit of the Americas in Austin, Texas

There are not too many spectacles in sports equal to the experience of watching a world class motorcycle race with your own eyes. Sure, the television coverage is awesome these days but it cannot replicate the sight, sound, smell and excitement that comes from being in the stands, watching these crazy bastards navigate their way around a race track with precision, cunning and a complete lack of fear.

This goes for all forms of racing, from grassroots stuff like flat track and motocross, all the way up the food chain to MotoGP. I've managed to attend races to watch all of these championships over the years, but if you like asphalt with your speed MotoGP is the ultimate show. The sound of a GP bike is second to none. The colors of the bikes, riders, gear and facilities pop out as if to say: "Hey! Get over here and drool over the blend of carbon fiber, aluminum, titanium and leather."

This is the stuff we all want to have. It’s the riders we want to be and the gear we want to wear. The GP paddock features the best of the best, and nothing else.

It had been quite a while since I last attended a Grand Prix, now that the Laguna Seca track (located in Monterey, California) has been removed from the schedule. Watching the race at the Super Speedway of Indy was cool, too – the first time – but it lost its lustre pretty quick. Compared to the tight, technical confines of Laguna, the Indy track was so flat and bland it didn’t even seem to be much of a challenge for the racers. Of course, these are the same guys who didn’t care much for the tiny West Coast course, with its massive elevation changes carved out of a hill. But the fans sure loved it. I happen to know at least a few racers, like Nicky Hayden, liked it, too.

Perhaps more to the riders' (and sponsors') tastes, the purpose built, multi-billion-dollar Circuit of the Americas combines the best of both worlds, with its speedway-style paddock, massive grandstands, and slinky layout winding through gentle hills on the southern outskirts of Austin, Texas. Despite only one rider being able to win a race here, this has become one of the most popular GP tracks on the calendar because the riders love it so much. Especially Marc Marquez.

Before this year I had never attended an event at COTA, so when I first walked through gates I felt a little starstruck. It was obvious why this facility has become so popular. The horizon is dominated by the 25-story tall COTA Tower – its red flowing lines looking like a rattlesnake poised to strike. The Austin 360 Amphitheater is nestled in grass at the foot of the tower with a huge pond giving the impression this place is lush and cool. It's a setting that seems to draw fans in. The so-called "Ducati Island" (an interactive fan experience) has become a staple at MotoGP events and, according to the PA announcements, the Texas round had the largest turnout of any Ducati Island event to date.

The hills around COTA reverberated with bikes' howling engines throughout the week. Regardless of whether they were MotoGP or MotoAmerica Superbikes, the wailing song of fuel-injected racing engines was always present – as was the sun for half of the time we were there. On Saturday it was cool enough to wear a jacket but on race day it was sunny and had warmed to a tolerable 75-80 degrees – a temperature the folks in Austin refer to as "sweater weather." It certainly felt hot to me. As I sat in the KTM grandstands with my long-time friend Sean and his pal David, the glowing orb overhead had barbecued us to medium rare by the end of the day.

David and Sean are both Texas CMRA racers, with my buddy holding the title of reigning Formula 40 Middleweight Novice Champion in their club. So, they knew everyone there and a number of their fast CMRA racers managed to make the big show in the support classes. This added to the cool factor of watching these young riders get their shot at racing on the world’s biggest stage.

All I had to hang my hat on was the fact I’d be riding the track two days later for the 2017 Aprilia RSV4 Factory and Tuono press intro. That story is coming soon; my short review is this: "Wheee!"

I promised I’d finish my test of the two bikes within 46 seconds of Marquez’s fastest lap if my friends would quit bragging about their racing exploits. You'll have to check out the article to see if I kept my promise... In all honesty, though, it was great to see Sean; a decade had passed since our last visit. If nothing else, racing brings old friends together.

I mentioned the COTA Tower earlier and despite having a painful pulled hamstring from a week earlier, I managed to (slowly) make my way up the 25 stories, so I could soak in the vastness of the facility from overhead. In a nutshell, it is awesome and worth the $10 price of entry (Yeah, ten bucks to walk up it). The glass floor is unnerving for some people. I saw many folks staring bug-eyed, through the glass to the ground below, while shaking their heads as if to say: "No freaking way!"

When I first stepped on it and looked down, my brain needed a second or two to figure out I wasn’t going to die. It is a long way down.

The vendors offered some seriously good food at prices that were in line with most bike races. Burgers and BBQ sandwiches were in the $12-15 range while foot long corndogs and other variations of the hot dog would run you $8-10 bucks. Meanwhile, booze and beer were all over $10 but well worth the price when it was time to sit down and watch the riders in action.

I'm not sure what the attendance was, but, despite the record turnout at Ducati Island, the crowds were pretty mellow. Without a doubt, Valentino Rossi gear was twice as prevalent as all the remaining riders combined. Vale46 has still got a loyal legion of fans and he proved worthy of their dedication in the race. The Yamaha pilot stalked Repsol’s Dani Pedrosa for over half the race before putting together a surgically precise pass that his former teammate had no answer for. He wound up second behind Marc Marquez (who won at Texas for the fifth consecutive time). The Doctor is still hard at work, searching for his elusive eighth MotoGP title after finishing runner-up for the past three years.

Despite the on-track dominance of Honda and Yamaha, the paddock seemed to be a buzz with attention around the European brands. Ducati and its new rider, Jorge Lorenzo, had big crowds of journalists nearby all the time. The burgeoning Aprilia and Red Bull KTM efforts look to be on par with the stalwart Japanese teams these days. It’s great to see so many manufacturers on the grid once again.

On the other side of the circuit, the OEM displays were packed with fans. The giant red Honda tent stood out form the crowd while my hosts for the weekend, KTM, were a close runner up with no less than three semi-trucks displaying the company’s best bikes. The Adventure series, along with the enduros and motocross bikes, were in the first rig. The popular street bikes, including the Duke line-up, were all in rig two along with the Duke 790 prototype. The third and final truck featured an assortment of Red Bull KTM racing machines, including Chris Fillmore’s beautiful #11 RC8 Superbike.

Having been at Laguna Seca and Indy MotoGP events over the years, I have to say that COTA is a pretty solid venue by comparison. It smokes Indy and – I hate to say it – it’s better than Laguna, too. The track is amazing. The facilities and venue are modern and clean, and offer awesome views of the racing from both the grandstands and the general seating on the hills. Traffic was pretty reasonable with two easy exit routes and the traffic patrols seeming to have the process down well after five years of practice.

Add all of this with the fact that the city of Austin is a great place to stay even better place to party in the evening after the races are over. Lately, the Hand Built Custom Motorcycle Show has taken centerstage in the evenings during MotoGP weekend. The Hand Built features the best of the best builders, from the Midwest and Southern states in particular, and has a cool, gritty theme.

When the dust settled on the USGP weekend it left me with these closing thoughts:

First of all, why don’t more people embrace motorcycle racing in the United States? It is pure man-and-machine action, and you can see the riders working throughout the entire race. It is fairly cost effective to attend, compared to an F1 or NASCAR event, and the action is arguably better. Last but not least, is the common bond that all of us bikers seem to share: the love of hauling ass, with the wind in our face and just a layer of dead cow skin between us and the pavement.

I can’t help myself here, so because you’ve read this far I am compelled to urge you to go to see a motorcycle race sometime soon. It doesn’t matter if it’s MotoGP, World Superbike, Flat Track or Motocross. Whatever racing is close to you, just bring your friends or family and check it out. It’s a load of fun and you’ll have a good time. I promise.