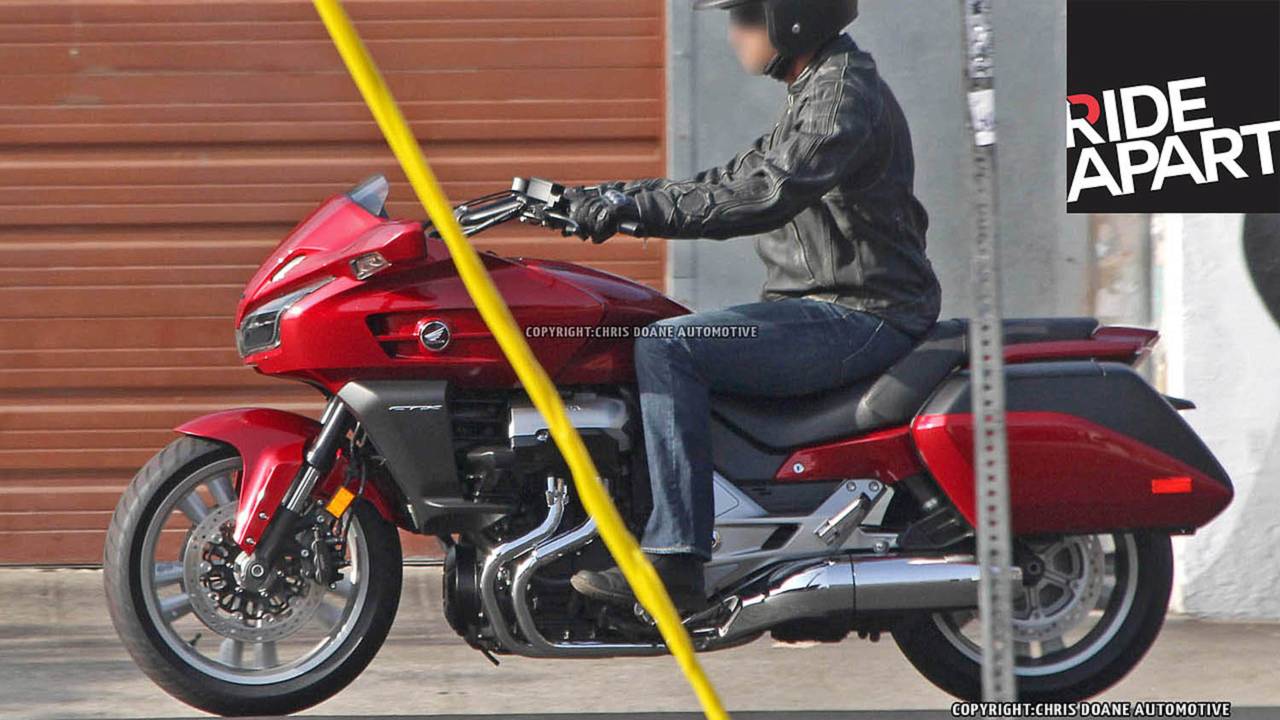 World Exclusive spy photos of the 2014 Honda CTX1300. We reveal the details and insider information on this latest cruiser from Honda.

RideApart spies have captured the new 2014 Honda CTX1300 while undergoing its official promotional shoot. An all-new cruiser that combines the ST1300's V4 engine with the CTX700's accessibility, it looks as if Honda is pushing further into dragging the cruiser market kicking and screaming into the 21st century.

Immediately noticeable is the CTX1300's exposed, liquid-cooled V4 motor. Clearly the same that is used by the Honda ST1300, except here it takes advantage of the exposed cylinder heads and exhaust headers to achieve a strong, muscular appearance.

We believe the CTX1300's motor to be the same due to the appearance of those exhaust headers, cylinder heads and crank cases. The head bolts are in an identical position within the identical covers.

What we can't determine through these images is if the CTX1300 will be fitted with the CTX700's defining features — a Dual Clutch Transmission and Antilock Brakes. Forgive us a moment of speculation, but fitting those same features to the CTX1300 would be in line with Honda's recent product direction. Both features make the smaller CTX700 exceptionally new-rider friendly. The DCT removes the need for a clutch lever and can operate in either automatic or manual modes, while the ABS brakes prevent the brakes from locking either wheel, making the bike even easier to ride.

Honda is strongly targeting new riders with nearly all its latest product introductions. With the American motorcycle market shrinking, they need to create a new audience to sell products to in the future. The idea is that someone who starts on a Honda CBR300R may move up to a Honda CBR500R, then a Honda CBR600RR. This new CTX1300 provides the same level of progression to its cruiser range. You may start on a CTX700, buy a CTX1300 a few years later, then move up to a Honda Gold Wing F6B. A tiered product range makes it easy for riders to advance the size of their bike as their skill (and budget) increases.

This new CTX1300 follows many of the smaller, cheaper CTX700's design cues: half-fairing, hard panniers and a two-level seat. Upgrades on the larger bike appear to be LED running lights, integrated speakers (and presumably an affiliated infotainment system) in the cockpit, a chopped screen reminiscent of the F6B's and mirrors which incorporate LED turn signals. Like the ST1300, the CTX1300 has crash protectors mounted on the engine. A nice touch for a bike which should be equally at home commuting, touring or leisure riding.

Mid-mount footpegs and pulled-back bars give the CTX1300 a refreshingly practical, sit-up-and-beg riding position. That will facilitate both excellent control and comfort, elevating the bike over its less practical competitors.

Controversially, the CTX1300 is somewhat reminiscent of the ill-fated Honda DN-01. Perhaps the greatest challenge the CTX1300 faces is proving whether Honda's original concept of an accessible, practical, convenient cruiser holds commercial promise.