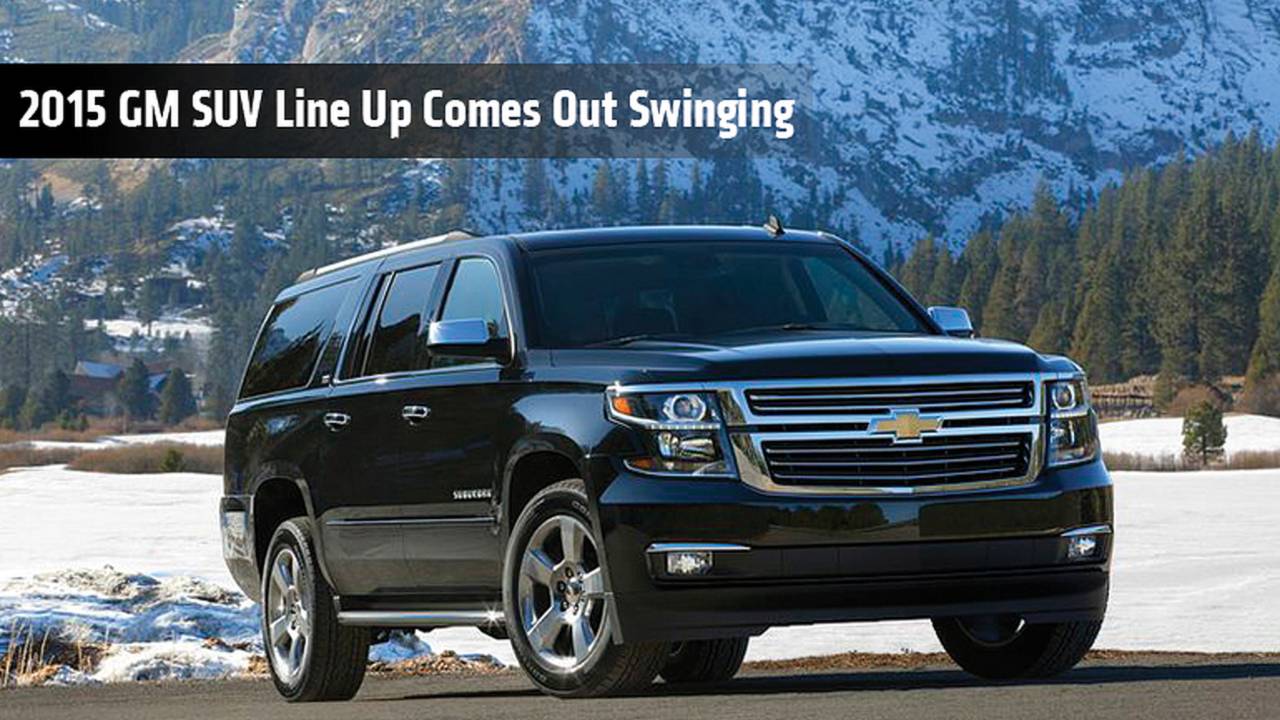 The 2015 GM SUV lineup is taking the states by storm. Each offering new levels of comfort and performance that make you wonder why it took so long to produce.

If you or someone you know has a full-size, body-on-frame SUV, chances are very good that it's a GM product. A 75% chance, actually -- that's GM's share of the market right now. GM has essentially stood pat on the Chevrolet Tahoe and Suburban, GMC Yukon and Yukon XL and Cadillac Escalade since 2007, and so has the remaining competition.

Full-size body-on-frame SUVs seemed like they were on their way out, until GM revamped the platform that underlies both their SUV and full-size pickup (Chevrolet Silverado and GMC Sierra). Rather than a quick polish on the SUV, GM has undertaken a complete makeover -- new exterior, new interior, and new powertrain -- to create a new generation of full-size body-on-frame SUV.

As expected, that results in more legroom in the second and third rows for the Suburban and Yukon XL, and lots more luggage and cargo space. The big change from the previous generation for all four vehicles is that the third row now folds into the floor, leaving a flat load floor -- no more lugging those heavy third row seats in and out of the vehicle, and no more worrying about somebody breaking in and stealing them, either. Upper trim levels get power controls for the third row, and even get power fold and flip for the second row.

Other notable changes across the lineup include aluminum construction on the hoods and tailgates for significant weight reduction, and inlaid doors for better aerodynamics, fit and finish and lower wind noise. There was a lot of emphasis on aerodynamic improvement, which has also resulted in a lower minimum ground clearance. GM says that very few owners ever took their SUVs off-road anyway, even if they were in the 70% of owners who ordered up four-wheel drive. It's something to be aware of if you are one of the 30%.

All of the new SUVs get a new engine: GM's 5.3-liter Ecotec3 V8 (355 hp/383 lb-ft). The high zoot Denali trim level on Yukon and Yukon XL comes with a 6.2-liter V8 (420 hp/460 lb-ft). Both engines are fueled with direct injection technology, and use variable valve timing and active fuel management. Fuel economy figures are improved over the outgoing generation, up to 16 mpg city/23 mpg highway for the 2WD 5.3 and 15 mpg city/21 mpg highway for the 2WD 6.2. Knock off one mpg for 4WD across the board. A six-speed automatic transmission does yeoman's duty.

There was nothing wrong with the ride on the outgoing generation, and GM hasn't messed things up here. It's still independent front/solid axle with multi-link out back. Magnetic Ride Control is available on the upper trim levels, and it makes things even better. The switch to electric power steering from hydraulic in the outgoing model is transparent -- it's dialed in very well, and is said to contribute to the improved fuel economy.

Towing capacity is decent at 8,000 lbs for the 4WD and 8,300 lbs for the 2WD - the lower figure for 4WD is a result of gross ratings, not a flaw in the operation of the system. All of the towing essentials are available, from integrated tow braking control to trailer sway control. I didn't get a chance to tow with the new SUV -- I hope to do that soon during a more extended testing period, so that I can report back.

The interiors of the SUVs have been much improved with higher quality materials and smart storage, power and connectivity options. There are at least 6 USB ports throughout the cabin, and up to 12 power ports, and you could spend all day counting the cup and bottle holders, cubbies and slots. Infotainment and rear seat entertainment systems are available and well-executed -- though I would have preferred headrest-mounted monitors rather than the single fold down screen that blocks the driver's rear-view mirror. As a minivan alternative, GM's full-size SUVs do a pretty good job of taking care of the passengers.

For serious towing, you'll probably still want to go for a heavy-duty pickup truck. But for maximum people moving and gear hauling, it's hard to beat GM's full-size SUVs. The other remaining full-size body-on-frame SUVs like the Nissan Armada, Toyota Sequoia, Ford Expedition and a few others, are all pretty long in the tooth by now, and they didn't make much of a dent in the GM dominance before. So, even as the full-size SUV slinks off the planet, it will be slinking with a proud GM nameplate.

I think GM has called it right, though. If you need a full-size, body-on-frame SUV, this is the place to come. It's not going to be cheap, because there's an awful lot of vehicle and technology on tap here. It may be that GM's full-size SUVs will be looked at as vehicles of need; not vehicles of desire -- and that's the way it probably should be. If you need a Tahoe, Suburban, Yukon or Yukon XL -- you should be able to buy one. If you simply want the biggest, most capable SUV money can buy, but you don't really need one, you'll probably go elsewhere.