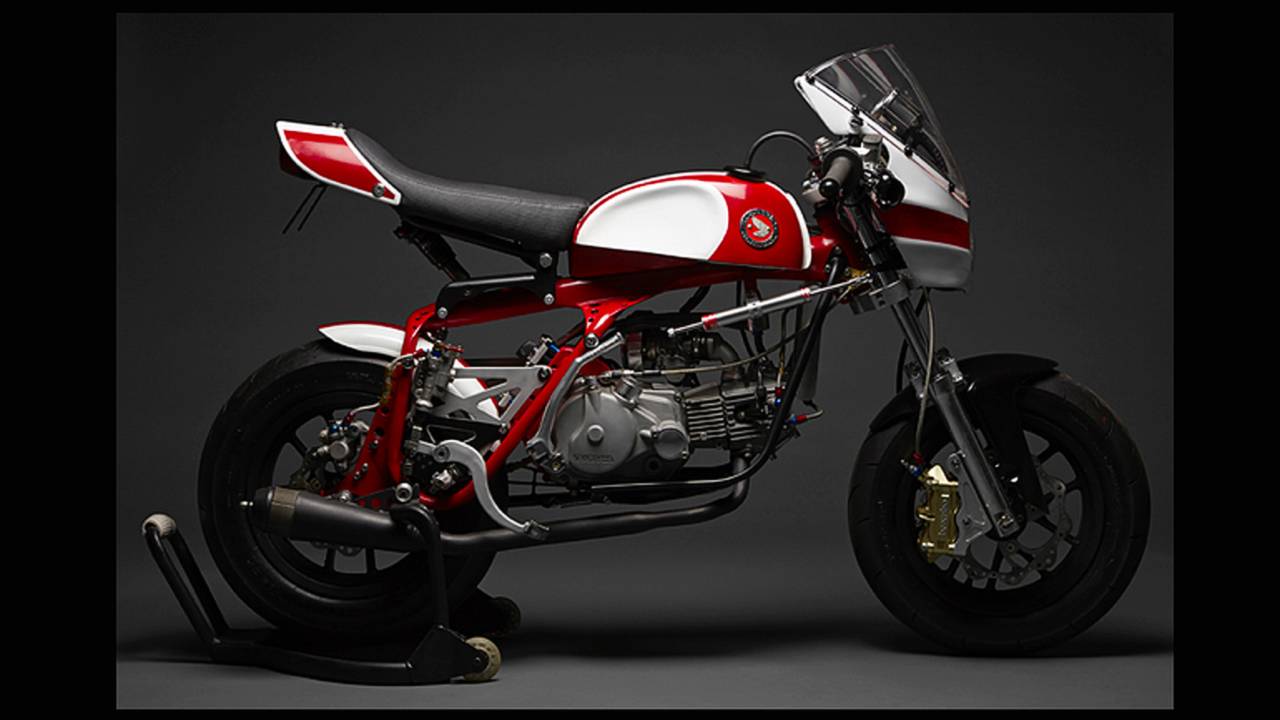 DavMo Moto's Magnum 50 minibike build is the most adorable cafe racer ever built.

Despite what you may have heard, minibikes are seriously cool. Their small size, general lack of safety features, and near indestructibility appeal to a certain set of motorcycle enthusiasts. These are typically individuals who cut their teeth, so to speak, on these tiny terrors, but minibikes have a lot to offer to anyone seeking a bit of dangerous (if kind of slow) fun.

That said, customizing minis isn’t anywhere near as common as it is with their larger, more powerful cousins. Especially when the transformation is as extensive as this bonkers, 50cc, Honda-based custom. It may not be the fastest of cafe racers, but this week’s Bike of the Week – the “Magnum 50” Racer – is super rad nonetheless.

Before getting into the customs scene, David Morales of DavMo Moto honed his skills restoring classic cars and experimenting with other metal-fab projects. Though he was fascinated by minis as a kid, it wasn’t until finding a box of Z50 parts while moving into a new house – left there by the previous owner – that his passion for minis was reignited (Huh, I guess previous owners are good for something after all! - JM). Later, a chance encounter resulted in Morales meeting fellow vintage scoot enthusiast Fabian Campos, and together the two would become fast friends before eventually opening The Denton Moto Collective in Denton, Texas.

After spending over a decade completing a handful of other small one-off builds such as a Honda CB50S and several Z50 variant projects, Morales came into possession of a 1969 Honda Z50A frame. Though it was  cracked, rusty, and generally in really poor shape, Morales saw a lot of potential in it. After settling on a hardtail design, he cleaned the frame and stripped it to bare metal. Then he broke out the Sawzall and the welder to reinforce the old frame and made it four-inches longer and two-inches taller. Morales performed all this frame surgery so the bike would better accommodate a full-sized adult and to make it more comfortable, better looking, and to enable better overall performance and rideability.

To further reinforce the frame, Morales made a pair of aluminum side-panels that also serve as mounting-points for the build’s rear-sets. A sprung saddle was married to the frame via a Fox mountainbike shock to give the build some rear suspension, and the headstock was modified to accommodate a set of trail bike triple trees mated to a pair of re-lengthened NSR50 forks equipped with ZB50 lowers. A bespoke fork-brace was also added, as was an unnecessarily powerful radial-mounted Brembo four-piston caliper connected to a CRF450 master cylinder. Morales then sourced a set of 12-inch NSR50 replica alloy wheels which he wrapped in Dunlop TT92 tires.

Unsatisfied with the Z50 mill's underwhelming 1.95 horsepower, Morales opted for a heavily massaged CRF50 engine bored-out to 106cc’s with a stroker crank. He also added a five-speed Takegawa transmission, four-valve Takegawa “Super” cylinder head, an oil cooler, high-performance clutch, lightened internals, and a Takegawa Hyper ignition paired with a Kitaco Supercoil. The heavily modified CRF power-plant now inhales through a a Keihin 28mm carb with a chrome-plated air-filter, and exhales through an exhaust built with pipework taken off of a Kawasaki KLX110 and a Norton Commando. A Supertrapp muffler caps the whole arrangement off quite nicely. To help with the build’s newly-gained boost in power, a side-mounted steering-damper was installed.

Next came the bike's tank and bodywork. Morales selected a tank off a 1973 Honda SL70 that he shaved down and added knee dents to. The front faring/cowl is a fiberglass unit Morales handmade after figuring out the desired shape using wire-form models. Once it was formed, he added a reinforcement bar and then topped it off with a vintage Ducati windscreen. The tail section was crafted out of formed steel and shaped to accommodate the dual taillight assembly. To finish out the bodywork, a rearfender from an unspecified donor was mounted in place.

For the Magnum 50's cockpit, Morales chose a high-end Special Parts Takegawa speedo and tach kit (with digital odo and temp) mounted to a custom bracket. He then modified antique WW2-era aircraft instrument lights to accept LED’s and dropped them into place into a simple metal dash/instrument panel. He also managed to use a toggle-switch with a safety cover borrowed from another vintage aircraft cockpit. The ignition-housing is another unique touch which was cleverly and resourcefully salvaged from an old ultrasound machine. Handlebars are a pair of Woodcraft clip-ons to the NSR50 forks with ASV levers.

The Magnum boasts an overall quality and craftsmanship that separates it from the vast majority of custom minis. This quality and attention to detail is probably why this one-off mini-scoot took home first place in the “Custom Class” at an annual National Vintage Japanese Motorcycle Club Meet. Morales clearly poured a lot of himself into this project, creating dozens of handmade components and doing almost the entire build by himself with his own two hands save for some minor details. Morales was also responsible for laying down the bike’s white and red paint digs that seemingly pay homage to the 1968 Z50A which was first to come to US shores.

The amount of work put into this mini cafe racer is just plain staggering. There are so many awesome little details that Morales managed to squeeze into the build, including what is one of the coolest cockpits I’ve ever seen, as well as a hand-made center-stand that doubles as a chain guard when folded up. While minibike and moped builds can be done for a fraction of the cost of a “normal” custom build, Morales’ motivation here clearly had nothing to do with saving money or cutting corners. At the end of the day this is just a really fun little motorcycle, earning it the spot of this week’s Bike of the Week.

If you know of a bike that you think deserves to be RideApart’s next Bike of the Week, drop us a line at info@rideapart.com