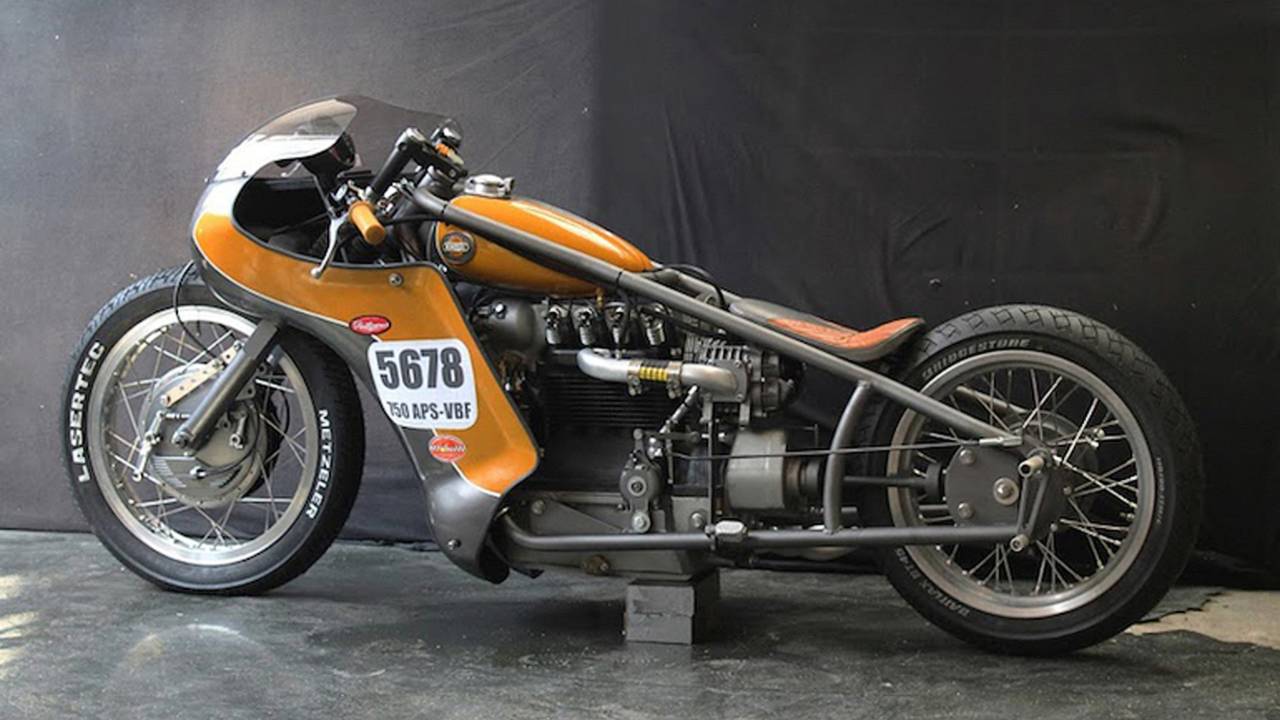 Land speed racers are some of the most purpose-built two-wheelers on earth. They are engineered for just one thing – speed. Even in their stock form certain motorcycles lend themselves to drag or land speed racing, like modern liter-bikes that are often just a forced induction-system and frame-modification or two away from becoming a competitive machine out on the salt flats or drag-strip.

Then there are bikes that are markedly un-ideal for this type of high-speed moto-endeavor. Like, for instance, Denmark's classic Nimbus Type C. One Danish builder decided to try however, and opted to use his country’s all-time-favorite scoot and take the extensive steps required to transform a Nimbus Type C into a truly impressive land speed racer.

As soon as I saw this bike I decided it would be the next Bike of the Week. Little did I know that, as fascinating of a machine as “Odin’s Fury” happens to be, what’s equally intriguing is the history behind Nimbus and its Type C.

Around the turn of the twentieth century, two Danish business men named Fiskar and Nielsen were the owners and operators of Nilfisk, a successful vacuum manufacturer that produced the first electric vacuum in all of Europe. In the following decades, Nilfisk turned its attention to building motorcycles, and released its first model in 1920 - a three-quarter-liter shaft-driven inline-four - under the company name “Nimbus Motorcycles”. Fifteen years later, Nimbus unveiled its second model, the Type C, which was a revised version of the company’s inaugural offering. The Type C – often referred to as The Bumble-Bee (or Humlebien in Danish) due to the sound the engine produced – exploded in popularity with well-over 10,000-units being churned out between 1934 and 1959. The bike was especially popular with Denmark’s postal-service, police-force, and military.

Despite the Type C not being an obvious platform for a land speed racer, its history sheds a lot of light on why “Odin’s Fury”  was selected by Nielsen as the donor bike for this project, especially for a machine that will be taken to a foreign land to compete (and to of course represent Nielsen’s native-Denmark). By the time this project was finished it would practically be a completely different bike, but that just meant Nielsen had a lot of work ahead of him to bring this ambitious concept to fruition.

This entire build started with the frame, where a new structure was fabricated by the Danish builder. Land speed racing doesn’t necessitate rear suspenders, so a hardtail chassis design was settled upon that used thick 4mm seamless, cold-drawn hydraulic tubing. The beefy bespoke frame housing the Danish inline-four was fitted with a one-off neck tube in order to accommodate shortened forks from an H-D Sportster. A pair of rims from a Honda Goldwing were selected to be laced with an original Nimbus shaft-drive hub in back and a dual-sided Grimeca drum hub off a BSA up front. A rear-brake unit isn’t much more than unnecessary weight on a landspeed racer, so Odin’s Fury wasn’t given one.

While the frame is the backbone of any motorcycle, the engine is the heart. After completing the chassis, Nielsen got down to preparing the engine for land speed runs. The original engine wasn’t built to withstand anywhere near the level of abuse that land speed racing requires, so many changes needed to be made. Stronger internals and beefier components made from more modern metals were utilized, in addition to a handful of stock Nimbus parts which Nielsen had zero trouble getting his hands on. Thanks to it having been so widely used by various Danish civil servants, original NOS parts are pretty abundant.

Now that the engine was close to bulletproof, it needed something of a kick in the pants. This came in the form of an H-D CV carb connected to an Asin supercharger. I don’t know how many forced-induction Type C’s are out there, but I’m extremely confident in saying Nielsen’s is one of very very few. A one-off quartet of stainless exhaust pipes were added that zigzag from the exhaust-ports down the right-side of the Nimbus build. The same stainless tubing was also used in the place of several hoses, giving a visually cohesive look when paired with the bulky frame which boasts darker tubing of a similar gauge. The exhaust-tubing and frame also share a lack of sharp bends or folds, furthering a aestethicgally uniform appearance.

Bodywork is a vital component of any full or partial-streamliner, and Odin’s Fury is no exception. Because the bike is built around a bespoke frame, either a custom fairing needed to be entirely fabricated or existing bodywork would have to be modified. Nielsen opted for the latter, utilizing a fairing off of an unknown 1970’s model from German moco, MZ Motorrad. The already wide fairing has been widened even further to fully adorn the triangular frame. A one-off windscreen had to be created to sit atop the modified bodywork. A beautiful orange and grey, two-tone livery with white pin striping on the fairing and tank was applied and a matching custom saddle was added along with orange grips on the clip-ons. The frame was also powder-coated in the same grey, giving Odin’s Fury a clean race-ready appearance. Lastly, authentic Nimbus tank-badges were painted to match the build’s orange and grey color-scheme, a minute but excellent touch.

A small gas-tank was selected to sit inside the frame, and holds enough fuel to power the bike for a handful of runs without carrying unnecessary extra weight. Custom brackets and rear-sets were machined and fitted, with the shift lever sitting beneath the left-side footrest. This is because of the Nimbus racer’s unusual riding position in which its pilot lays horizontally across the machine. The prone riding position does serve an aerodynamic purpose, sheltering the rider behind the bodywork from the intense winds experienced at high-speeds. Modern instrumentation was utilized behind the windscreen in the form of a single tach with warning lights, while a stacked analog cluster sits neatly behind the bodywork on the right-side of the bike, displaying info from the supercharger.

I can’t deny the seat’s proximity to the rear-tire, combined with the horizontal riding position, would make me wildly nervous about riding this bike, especially at high speeds. Nonetheless Odin’s Fury is one seriously cool build. This doesn’t come as a huge surprise if you’re familiar with Gonzo Moto, the shop Nielsen works from, as it has built some genuinely cool custom motorcycles in the past. Odin’s Fury’s aggressive look may be more of a result of building a purpose-built machine within specific AMA regulations for a particular class, but that doesn’t exclude it from still being one hell of a bike.

Thanks to Jason Marker for suggesting this bike too. If you know of a motorcycle that you think deserves to be RideApart’s next Bike of the Week, drop us a line at info@rideapart.com