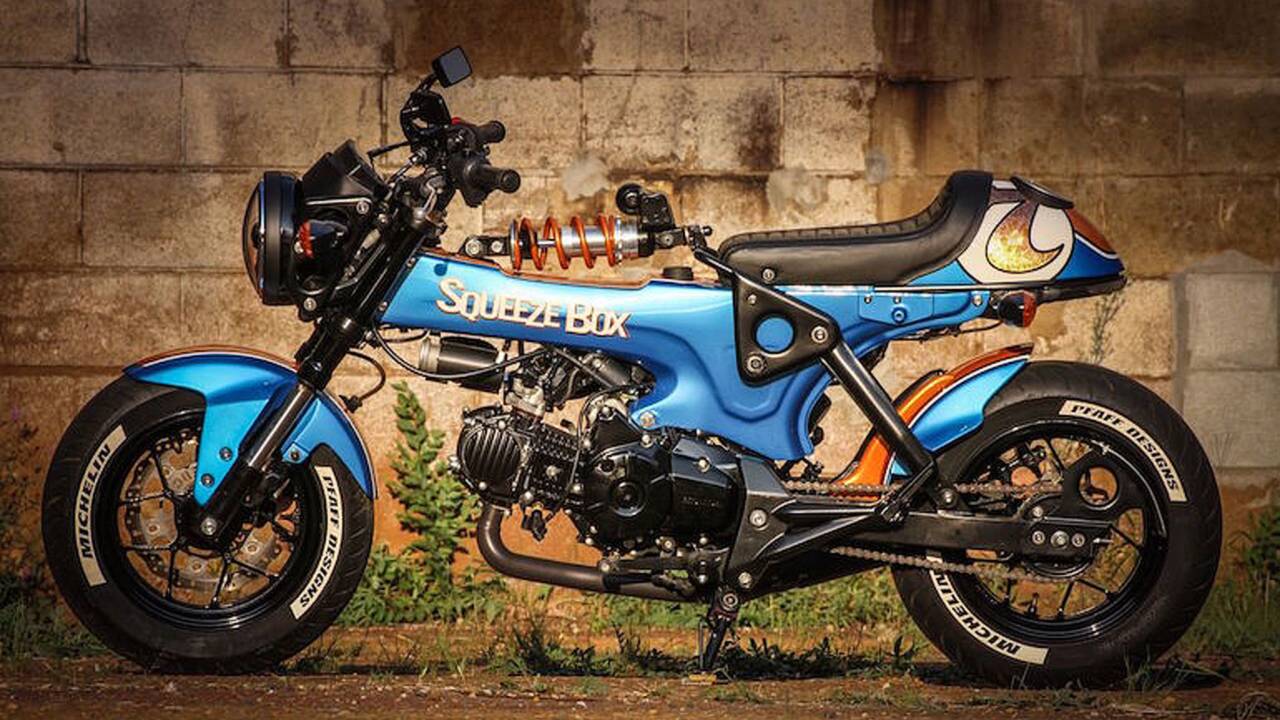 Like a moto-version of Liam Neeson in Taken, Murray Pfaff has a very particular set of skills. Skills he has acquired over a very long career. Skills that make him one pretty bad-ass builder. The self-described hot rod designer, who studied industrial design at Syracuse University, has been churning out one-off car designs for the last couple decades and drawing up auto-design blueprints for builders and customers under his company name, Pfaff Designs.  When describing himself and his work, Pfaff explained, “I don’t take myself too seriously, I like building things that put a smile on peoples’ faces.”

What Murray calls his most ambitious project so far is a 1959 Chrysler build called “The Imperial Speedster”; originally a four-door model that was sectioned, shortened by four-feet (and two-doors), and then given a late-model 6.1-liter Mopar SRT HEMI engine, (rated at 425hp & 410ft-ft. of torque) and the axle and independent rear suspension from a Dodge Viper.

The Imperial Speedster was the result of around 10,000 man-hours spent in Pfaff’s home’s two-car garage, where he and a few talented buddies cooked up the aggressive looking hot rod over the course of about four-years. It may not come as a surprise then to hear that today's Bike of the Week, the delightfully named Squeeze Box also came to life in Murray’s home garage.

Squeeze Box blends a new Honda Grom with a vintage Trail 70 into one amazing package. The result is an incredibly fun little custom born out of an enormous effort. Pfaff draws inspiration from all over the place, but often he’ll start with an idea or two and then build off of them. In the case of this little Frankengrom-70, he felt like the Trail 70’s “back-bone” looked like it was missing something. He’s also always liked rocker-actuated shocks and the mechanical linkage that connects it. Marrying these ideas gave way to the early drawings of the Squeeze Box. Eventually, a new Grom was added to the mix to give the one-off two-wheeler more modern amenities.

“I design stuff for other people as my day job but I still really enjoy building stuff on my own as a hobby. Getting out there and wrenching on something frees the mind,” Pfaff explained to me.

It all started with the frame of the Trail 70 that was chopped-up, sectioned, and then lengthened by around five or six inches. The Grom’s upside-down fork had to be shortened by five inches as well, prior to being fixed to the frame’s bespoke neck. The custom chassis also had to be modified to accept the Grom’s 125cc, fuel-injected engine and the new rocker-actuated rear suspension.

The eye-drawing (and catching) rocker-shock gave the machine a main focal point, as well as its name, and allowed Pfaff to build the rest of the bike around it. Wanting the build to be closer in size to the Grom, the scoot’s lengthened frame was capped off in the back with an aluminum cafe blister that Pfaff modified to house the Squeeze Box’s fuel-tank. Up front, the Grom’s instrumentation’s plastic cowling was trimmed down some to sit flush over a JW Speaker adaptive headlight and round out the front of the bike's shape.

The number of small areas that received a great deal of attention are a big part of what separates this professional quality build from other small-displacement customs out there. Pfaff had a vision of what he wanted, and he worked with what he had – or could get his hands on – and managed to get everything to click incredibly well. Dissatisfied with the Grom’s rear fender, Pfaff ordered a Grom front fender, reworked it, then used it as the bike’s rear fender. Pfaff not only designed this build, but he’s also responsible for a good deal of the heavy lifting when it came time to build the damn thing.

Pfaff widened and stretched the frame, reworked the rear-fender, made custom brackets for the license-plate, headlight, and many other pieces. He also made the custom formed lens on the LED taillight housed in the sub-frame’s seat-hoop. He tackled the fancy rocker-actuated suspension, which consists of the Trail 70’s swingarm, the custom fabricated rocker, and a big Yamaha R6 coil-over. He even designed the bike's livery, prepped it for paint, and sprayed on an Envirobase base coat. That said, a wise man (or woman) knows their own limitations, and Pfaff knew when to bring on outside help in areas that aren’t his forte in order to keep the quality of the build as professional as possible.

The seat’s embossed custom leather saddle was courtesy of Shawn Paul Custom Interiors, and the “Pfaff Designs” permanent tire graphics were done by by Tred Wear. While Pfaff did do the paint’s designs and layout, the actual paint application was performed by John Mijal at That’s Minor Customs in Clinton Township, MI. The gas tank was notched and modified by Steve Germond, who not only did that, but also helped Murray fabricate and section the frame. The Rocker suspension bushings were machined by Tom Stark, while the Grom’s USD fork was shortened and machined by Fortune Tool in Wixom, MI. Before being modified by Murray, the build’s aluminum cafe-tail section was fabricated by Legendary Motorcycles in Naples, FL.

On top of utilizing various stock components from the Grom and Trail 70 donors, an array of aftermarket parts were also added to finish out the build. In addition to the aforementioned JW Speaker 8790 Adaptive LED headlight, Pfaff equipped the bike with a Screaming Banshee Shockwave Air Horn (my GSXR has one, they’re awesome), a custom 1.5” stainless intake with K&N filter, Brock’s Performance Alien Head 2 full exhaust system, oversize brake kit by EBC Brakes, a set of mirrors ordered off of eBay, and a pair of Michelin Pure Power (130/70-12 front, 140/70-12 rear) tires.

Murray Pfaff’s talent and passion for what he does is incredibly evident when viewing his handiwork. Not only does the auto-designer create awesome machines, but he allows his laid-back and lighthearted personality to shine through his creations. The tremendous attention to detail evidenced with the Squeeze Box demonstrates how thoroughly considered every inch of this machine was prior to the build. So many modifications were made to the two donor Hondas, yet this frankenbike came out looking ridiculously clean. Ultimately the Squeeze Box is a one-off build that’s as unique as it is fun, rightfully earning its place as this week’s Bike of the Week.