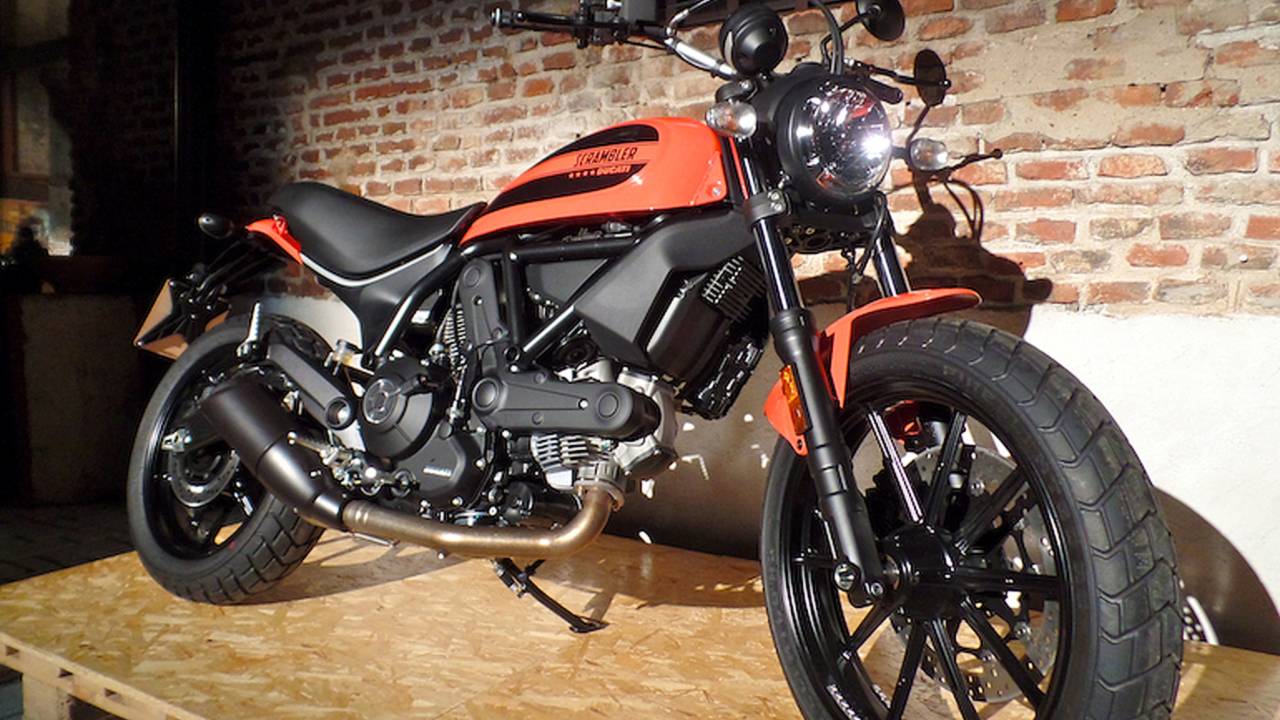 Ducati has unveiled a host of new models on the eve of the annual EICMA event in Milan. Most exciting? A 400cc Scrambler, a Multistrada and a Diavel.

Riding the wave of their most successful year ever, Italian manufacturer Ducati has unveiled a host of new models on the eve of the annual EICMA event in Milan. Arguably the most exciting new models are the all-new 400cc Scrambler, a Multistrada that is actually designed to go off-road, and a Diavel that finally gives in to the dark side and offers feet-forward seating.

READ MORE: Living the Ducati Life, If Only For A Day | RideApart

We'll take a more extensive look at some of these bikes later today, and in the days to come, but here's a very brief overview of what was revealed at Milan's Elfo Puccini Theater on Monday night.

Ducati CEO Claudio Domenicali repeated the assertion that Scrambler is a sub-brand of Ducati, and one that has been incredibly important for the company. In the roughly 10 months since its initial public arrival, it has sold just shy of 15,000 units, thereby putting a Ducati in the top 10 worldwide sellers for the first time in the company's 89-year history. This new 400-cc addition will not only appeal to younger/newer riders, it will also allow the company to reach previously untapped markets around the world.

As part of the Scrambler expansion, Ducati also unveiled another variant of the 803-cc version, this one designed to cash in on the popularity of flat-trackers. From a distance, though, it is indistinguishable from a standard Scrambler Icon, save for additional number plate space on the side and front.

Claiming that it's the "first Ducati to be able to travel the world, really, on any terrain," the Multistrada 1200 Enduro is a top-of-the-line machine designed to compete in the rarefied air currently occupied by the BMW R1200 GS Adventure and KTM 1290 Super Adventure. Sporting a 30-liter tank (6.6 gallons), the bike is wide and dripping with electronic aids such as cornering ABS and the ability to read texts on the bike's dashboard (because why should car drivers be the only ones getting distracted?).

Commemorating a run up Pike's Peak this summer with erstwhile RideApart pal Jamie Robinson at the helm, the Multistrada Pike's Peak is basically the road-going Multistrada we all know and love with a fancy paint job, which of course makes it go faster. OK, well, it's more than that. The bike features a number of suspension and performance upgrades too.

Remember when Ducati used to get really uptight when people would refer to the Diavel as a cruiser? They hated that, so much so that they went out of their way to tell people: "Don't call it a cruiser."

Now you can call it a cruiser. The XDiavel S has feet-forward pegs. This is the thing Ducati was teasing with those weird videos not too long ago, and Claudio Domenicali spent a very long time working through an awkward analogy regarding the difference between the colors red and black as a means of explaining that embracing the cruiser genre has been something of a challenge for a company that takes so much pride in its racing heritage.

To that end, Ducati have made an atypical cruiser. As one of Ducati's test riders, Alessandro Valia, said: "It does everything that cruisers don't. It accelerates, brakes, handles..."

That racing heritage carries forward in the form of the new Panigale 959, which sees the engine size of the "little" Panigale boosted by almost 60-cc. That boost sees the 959 delivering 157 hp at 10,500 rpm, according to Ducati. The bike has also seen some minor design tweaks that aren't immediately apparent to a sportbike novice. Amusingly, Ducati still refers to this almost 1-liter bike as "midsize."

Like so many of the bikes in the Ducati lineup, the Hypermotard/Hyperstrada gets a new, bigger engine for 2016, which will see power increase to 113 hp and torque by 10 percent. The Hypermotard 939 SP is similar to the Multistrada Pike's Peak bike in the sense that it too has been given a fancy go-faster paint job. The Hyperstrada, of course, is a Hypermotard with a screen, bags, and a few other accoutrements to facilitate tackling light touring.

READ MORE: Ducati Demo Day - For the Rest Of Us | RideApart

Much More to Come

I'll be taking a more in-depth look at a few of these bikes soon, as well as doing my best to cover all the major news flowing out of EICMA this week.